Nuts to the Romantics: I Want the Red Sox to Win Every Year

It wasn’t so long ago that a self-obsessed stripe of Sox fan reveled in the team’s “lovable losers” image. I’m with Leo Durocher on this score. 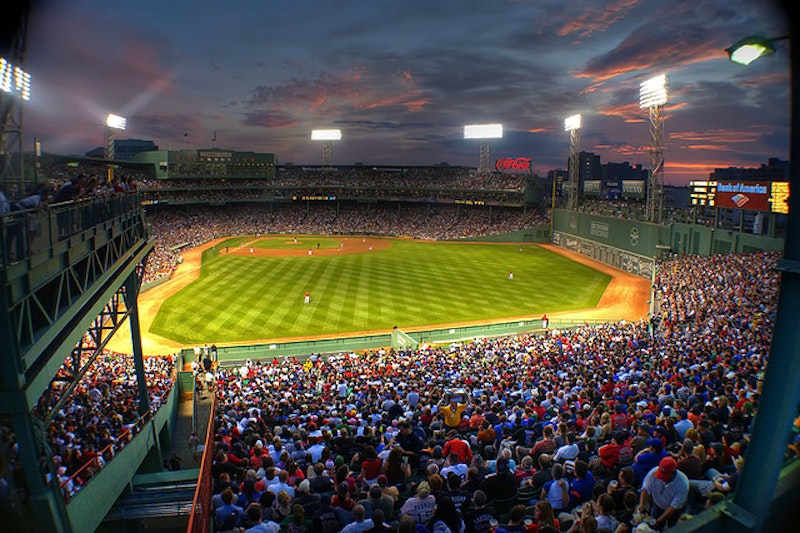 It’s unlikely that among the 38,000 or so fans jimmied into Fenway Park last Saturday night to see the Red Sox and Cubs—the Chicago team’s first visit to Boston since the1918 World Series—more than 15 percent would be able to identify the author who coined the phrase “lyric little bandbox” in 1960 that was so admired by New Yorker readers who identified themselves as intellectuals who cheered for the thinking man’s team. The one that breaks your heart, year after year, builds character and lets you bond with the proles for three hours. That’s fine by me: I never cared for John Updike’s ugly suburban angst fiction or essays—the Bosox’s lackluster ’84 roster is more familiar to me today than the life and death of Rabbit Angstrom—but it pains many New Englanders who believe that since Boston won the World Series in 2004 the world turned upside down, and not for the better.

This repellent attitude—at least to me—was symbolized a few weeks ago by the actress Sarah Silverman, an alleged Sox fan who appeared with the I’d-rather-be-watching-football Joe Buck and the doddering Tim McCarver on Fox’s game of the week at Yankee Stadium. Silverman said that it was no longer fun to root for the Sox since they’d shed the label of “lovable losers,” and resented the creation—brilliantly marketed by Boston’s current ownership group, which took over in 2002—of “Red Sox Nation,” the bandwagon jumpers who flit from winning team to winning team and can’t understand the hairshirt philosophy of suffering with the underdog. Silverman admitted that she doesn’t really follow baseball anyway—and did jolt Buck and woke up McCarver when she suggested that more pitchers follow Doc Ellis’ example and drop a tab of LSD before taking the mound—and so her visit in the booth was brief.

The Sox have now racked up more than 650 consecutive sellouts at Fenway—an MLB record—a feat that would surely dumbfound the likes of Dick Radatz, Mel Parnell, Pumpsie Green and Dom DiMaggio, to say nothing of Ted Williams (the subject of Updike’s essay), who usually played to a half-empty house in the dumpy stadium that was built in 1912 and is still referred to as “a shrine,” an attraction hilariously rated somewhere between the Sphinx and Stonehenge. It’s a racket that principal owner John Henry, along with Larry Lucchino, Tom Werner and general manager Theo Epstein have magnificently exploited, and, not incidentally, backed up the bravado with a lot of money to make improvements every year at Fenway.

My 16-year-old son Booker and I took a road trip to Boston last weekend, with the Saturday night game the centerpiece, and, as we’re both serious Sox fans, it was exhilarating, even if the home team imploded in the 8th inning, resulting in a maddening 9-3 Cubs win. (Leading 3-1, manager Tito Francona brought in chunky Matt Albers rather than the usual eighth inning set-up man Daniel Bard, which stirred a lot of questions. Albers has pitched well in 2011, just not this time—as for Bard, the Once and Future Closer of the Sox, he’s now a head case, as was painfully demonstrated Monday night when he blew a game in which starter Clay Buchholz had shined against Chief Wahoo’s out-of-nowhere spectacular Cleveland Indians.) We hadn’t been to Fenway for many years—in fact, the last time our family went we were able to buy tickets two days prior to the game, at face value, no less—so for Booker it was an event he simply described as “awesome.” I’ve been to Fenway a lot over the years, but wasn’t quite prepared for the stampede before the first pitch as the mob moved like molasses to find their seats.

I’m a little embarrassed to reveal how much I forked over to a StubHub vulture last December—probably one of the Sox season ticket-holders who make a killing each season—so I won’t. Let’s just say it was a Christmas present for my younger son and worth the expense. Booker’s normally an unflappable young fellow, but his eyes grew wide as we settled into our right field location—a girder obscuring one of the new Jumbotron scoreboards—and stood for the “Star-Spangled Banner” prior to the first pitch. I’ve been to baseball stadiums across the country, but the crowd at Fenway has the largest contingent of spectators who actually sing the national anthem and know most of the words. That this occurs in Massachusetts, the purgatory of Harvard/Kennedy/Kerry hot air, strikes me as very comforting.

It’s well-documented that most of the seats at Fenway—excepting the Monster section atop the Green Monster in left field, which is the preferred choice of high rollers and well-heeled or well-connected spinning tops who apparently don’t care that you can’t see hardly any outfield plays from that perch—are tiny and uncomfortable, constructed for smaller American bodies early in the 20th century, and as such it’s impossible to avoid interaction with section neighbors, especially those who get up every inning for a dog or beer. I like talking to strangers at games, and had the fortune to be sitting right next to an amiable environmental engineer from Chicago who, with his dad, wife and two small kids, came to see the Cubs. He knew his baseball and was tickled when his cell phone conked out after getting drenched by a fallen cup of Coors Light, since that meant he wouldn’t be interrupted.

Booker was sitting next to an overgrown preppy, also from Chicago, who claimed to be a lawyer and 37 years old, and this guy wouldn’t stop yakking. Didn’t know a damn thing about baseball—when he asked my son’s favorite player and he replied that it was Boston’s ace pitcher Jon Lester, the alleged barrister asked if he was a “good hitter,” unaware of the DH rule in the American League—but he was kind of funny for a few innings. He grilled Booker about the Sox and when he told the Chicagoan some stats of the Sox players, the guy was taken aback and dubbed my son, “ESPN,” his own synonym for “seamhead.” As the game wore on—punctuated by David Ortiz’s 300th home run—the increasingly inebriated motor-mouth paid more attention to the pair of Boston University gals in front of us, shamelessly coming on to them, although to be fair, they didn’t seem to mind.
I’d forgotten how difficult it is to snag a cab from Fenway, even if you leave a bit early—we couldn’t endure the Sox’s series of errors in that eighth inning—and just how ruthless, and rude, fellow pedestrians are. Sure, if it’s pouring, it’s okay to snake a cab ahead of someone waiting ahead of you (unless it’s an elderly person, and that’s a one-way ticket to hell), but this mix of Bostonians and tourists snapped the boundaries of decency with their zeal to jump the ersatz queue. Worse than midtown Manhattan on a Friday afternoon.

Still, Booker was a good sport (it was his old man who turned into a grump), even if he was exhausted after a couple of days walking around Boston, improbably finding an independent comics store that stocked an enormous catalog of manga, and eating a few bowls of New England clam chowder, one of his favorites. It’s the resilience of youth: earlier on Saturday, we caught a taxi on Commonwealth Ave., told the cabbie to drop us off at the Fairmount Battery Wharf Hotel, and he was helpless, almost blubbering with excuses, asking me to guide him there. I could’ve done that in New York, Baltimore or Washington, but Boston’s curlicue of streets and alleys and roundabouts is complicated, and so we idled in traffic as he tried to find our lodgings, which abuts the North End. At one point, the driver claimed it was his “first day on the job,” like I haven’t heard that one a million times before, and offered to turn off his meter. No kidding, buster.

I’m way off track here, and may kick a dog or cat if I think about this inconvenience any longer, so a few final points. One: If you’re a baseball fan and make the exorbitant trek to Fenway, make sure to join the morning tour of the ballpark; it’s just an hour and a lot of fun. Two: Boston was my favorite city as a kid, but the charm’s worn off (excepting the Red Sox), since aside from singular attractions like Bunker Hill, most of the city is a CVS/Au Bon Pain/Barnes & Noble/Dunkin’ Donuts/Best Buy/Urban Outfitters mélange. And three: I don’t give a hoot what Sarah Silverman or Bill Simmons or Doris Kearns Goodwin have to say about the “good old days” when suffering along with the Bosox was considered noble. That’s for bush leaguers: as a Sox fan since ’62, who remembers the ’86 Series like it was last Sunday, I want my team to go wire-to-wire every single year, and don’t care one iota if fans of other teams claim that John Henry is pulling a Steinbrenner and buying his way into the playoffs.