Lebron and the Miami Heat. 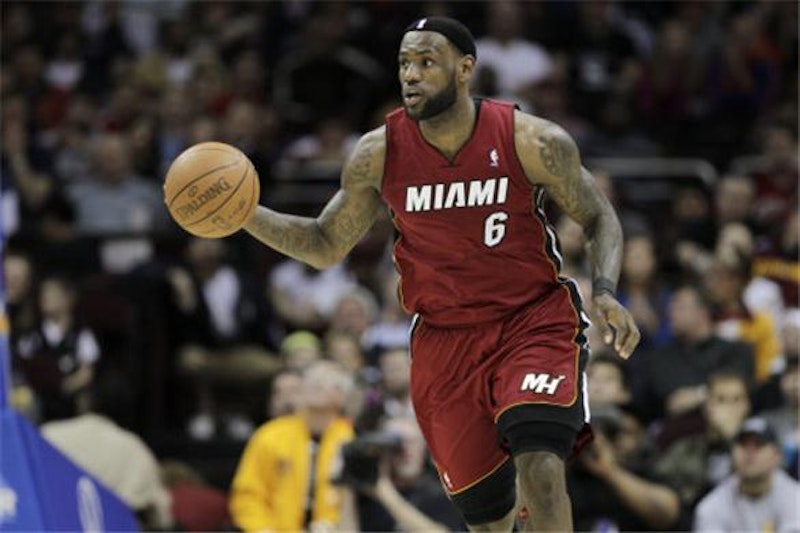 It says here that the Miami Heat will defeat the Dallas Mavericks in six games to win the NBA Finals. In fairness, I’m a Heat fan, and have been since the franchise's inaugural 1988 season. Why would a 12-year-old white kid from suburban Baltimore become a Heat fan? There's a two-part answer.

1. In 1988 Baltimore had no NFL team so I was stuck with the Orioles during the summer and a bunch of bitching about the Redskins being shoved down our throats during the fall. The NBA started to fill the winter gap. The Bullets were awful, not to mention another DC team, so rooting for them was out of the question.

2. I hate front-runners. When everyone runs left I tend to go right. It's one of the reasons I've never watched one of The Lord of the Rings or Harry Potter movies. So while classmates were arguing Magic vs. Jordan I was rooting for Jon Sundvold and Rony Seikaly.

That said, my allegiance has ebbed and flowed over the years. In fact, I thought the 2006 Championship, the only title in team history, was cheapened by the fact that Shaq was essentially brought in as a mercenary. The Shaq acquisition was nice because the team won, but he clearly offered no long-term solution and was out of town as quickly as he arrived.

When LeBron James announced last July that he was taking his talents to South Beach I was genuinely excited; not only by the prospect of having two of the top five players in the league on my favorite team, not to mention Chris Bosh, but also by the fact that the little old Miami Heat was transformed overnight into the NBA's most hated franchise. LeBron went from favorite son to turncoat by uttering one sentence. The backlash was amazingly short-sighted. Comparisons to the Yankees are unfounded. The two leagues have vastly different economic structures and the Yankees have wielded their checkbook like a weapon for about 90 years. Every team in the NBA had the wherewithal to do exactly what Miami did last summer but lacked either the foresight, planning, guts or recruiting ability to pull it off. Maybe what they really lacked was Pat Riley.

LeBron had given the Cleveland Cavs the best seven years in franchise history. He led the team to 60-win seasons and playoff appearances while the front office surrounded him with role players. Staying in Cleveland would have been a terrible decision and LeBron would’ve ended up on the dubious list of best players who never won a title. Are you out there Dan Marino and Sir Charles?

The only "decision" James had to make was, Miami or New York. Once Dwayne Wade shunned the Bulls it was a done deal and Bosh was along for the ride.

I didn't think the team would compete for a title this year, and would've been perfectly happy with a second-round playoff exit. Really, anything after beating Boston was icing on the cake. Now the Heat has drawn a favorable matchup in Dallas.

The really scary thing for all the Heat haters is that this was the year they weren't supposed to win. Mike Miller and Haslem missed huge chunks of the season. They don't have a reliable center on the roster. If anyone was going to knock off the Big Three this was the year to do it. With the Lakers in turmoil after the early playoff exit and Phil Jackson's retirement, the Bulls lacking a supporting cast for Derrick Rose and the Celtics getting older by the minute, this could be a remarkable run of success for the Miami Heat. As a fan of other downtrodden franchises, Orioles and Cubs, I'm certainly not one to take anything for granted. Take the Heat in six, and if you hate LeBron for choosing Miami over Cleveland, at least watch and appreciate him for the being the best damn player on the planet.