But the O’s need to be active buyers at trade deadline. 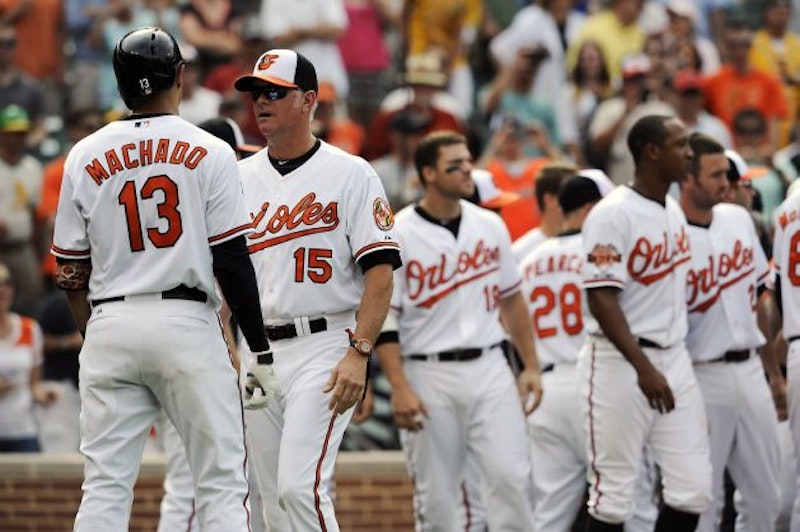 Last season the Orioles rode a power-hitting infield (that featured four All Stars) into season-long contention, with the quartet of Chris Davis, Matt Wieters, Manny Machado, and JJ Hardy accounting for a staggering 267 extra base hits. The 2013 Orioles were ultimately undone by their lack of quality starting pitching as the team fell out of the Wild Card race in the season's final week. The Orioles are contending once again, a third straight winning season could be in the works, despite receiving just a fraction of last season's production from the infield that was praised just a few months ago.

The same infield quartet has accounted for just 61 extra base hits in 2014. Soon-to-be free agent shortstop JJ Hardy finally hit his first home run of the season last weekend in New York and is posting a .685 OPS and has a slugging percentage about 60 points below his career average. Machado figured to struggle coming back from a devastating knee injury suffered last summer but the 21-year-old defensive standout has yet to get on a hot streak. After slamming a league leading 51 doubles last season, Machado has just seven two-baggers in 199 at bats in 2014. Chris Davis, the slugging first baseman who became a Baltimore cult hero last April has struggled to repeat last season's unprecedented success. In fact, Davis hasn't been able to put up the numbers of 2012 when he hit 33 homers and posted an OPS of .827, though he gave the Camden Yards faithful a dose of Orioles Magic with a walk-off three-run homer versus the White Sox earlier this week. Fans are hoping that it's the start of a hot streak for Davis, but that's probably wishful thinking. Davis has seen his slugging percentage drop nearly 200 points from his breakout 2013 performance.

The biggest loss for the Orioles has been the elbow injury, and subsequent Tommy John surgery, for catcher Matt Wieters. The All Star was maligned for his paltry .235 last season but he still provided Baltimore with 22 home runs and 79 RBIs. In Wieters absence, manager Buck Showalter has to choose between rookie backstop Caleb Joseph and recently acquired veteran Nick Hundley. Joseph has flashed a strong arm and good glove but his .171 average is a drag on the lineup.

The Wieters injury, coupled with the ineffectiveness of Davis, Hardy, and Machado, has exacerbated the ballclub's hole at second base. Baltimore’s front office never addressed the weakness at second last offseason and were bailed out when rookie Jonathan Schoop won the job out of Spring Training. Schoop has shown some pop and looks like a solid defender but the O’s may not be able to continue to carry Schoop's .607 OPS in a lineup that features Joseph's weak bat and the slumping trio of 2013 All Stars. The rookie, and team, may be served by a few months in Triple-A.

The Orioles have been saved by the late-winter signing of Nelson Cruz and recent hot hitting from journeyman Steve Pearce. Baltimore has already traded for one catcher (Hundley) and with Wieters expected to return for Opening Day 2015 it’s unlikely the club will seek an upgrade behind the plate. The Orioles should take a look at Cubs' infielder Luis Valbuena. The former Indians' castoff is having a terrific season for Chicago and has the versatility to play multiple positions. The 28-year-old infielder is posting a .782 OPS for the Cubs. Valbuena has logged most of his starts at third this season but he'll soon be pushed aside when uber prospects Kris Bryant and Javier Baez ascend to the big leagues. Valbuena has increased his value to the point that he's a tradable asset for the rebuilding Cubs. Chicago and Baltimore have hooked up for a number of recent trades and could be a good fit once again. A Valbuena to Baltimore trade wouldn't send the other AL East squads running in fear but he would give Showalter a versatile option to improve his club's infield. Valbuena's OBP would be a welcome addition to a Baltimore squad that ranks ninth in the American League in that category.