Can Dwyane Wade Save the Heat, Again? 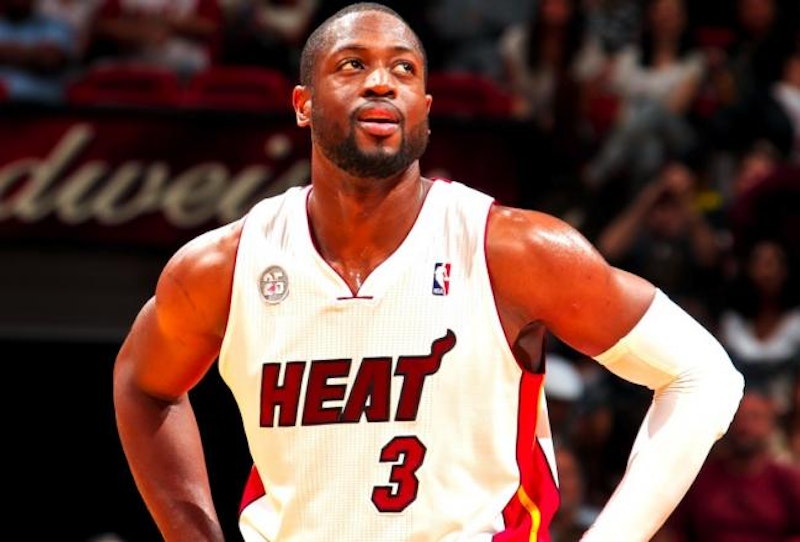 It’s been four years since Dwyane Wade and Pat Riley lured LeBron James and Chris Bosh to South Beach. Following four NBA Finals appearances and two championships the “Big Three” is at a crossroads. After being run out of the gym by the San Antonio Spurs the Heat are at risk of losing James to free agency and dealing with the reality of Wade’s diminished abilities.

James opted out of his contract earlier this week, a move that was long predicted but still set off rumors concerning potential destinations. Despite the Heat’s struggles in the Finals it’s unlikely that James will find a suitor better equipped to win now or a more respected front office than Miami. The bigger question concerns Wade’s future. The three time champion, former Finals MVP, and Miami icon was a bust against San Antonio. Despite being held out of 28 games last season to preserve his troubled knees Wade struggled to find a groove against the Spurs. Now Wade must decide if he will join James, and possibly Chris Bosh, and opt out of his contract by next Monday.

Wade sacrificed dollars and pride when he teamed with James and Bosh four years ago. Each player could’ve made more money on a max contract elsewhere. Wade voluntarily gave up the mantle of alpha dog on his own squad to bring James to Miami and chase championships. If the Heat hopes to make the NBA Finals for a fifth consecutive season they’ll need Wade to swallow his pride and accept a reduction in salary and on court role.

Miami ran into a buzz saw in San Antonio and was thoroughly outplayed in the backcourt and dominated on the boards. If the Heat hopes to keep LeBron in Miami they’ll need to convince him they have a plan to add the pieces to close the gap with the Spurs. Miami needs an upgrade at point guard and there are several intriguing options on the free agent market. Pat Riley would surely love to bring Kyle Lowry into the fold but if Wade fails to opt out of his contract the team won’t have the payroll flexibility to address the holes on the roster. Riley may need to convince Wade that there’s no max contract waiting for a 32-year-old slasher with bad knees. If Wade agrees to once again take less money and perhaps transition to a sixth man role he could not only save the future of the “Big Three” in Miami but also provide Riley with the salary cap flexibility needed to chase another title.

James is no doubt already hearing pitches from the Lakers, Knicks, Rockets, and Mavericks but Miami remains his best option for an extended run of playoff success. Bosh is likely to opt out of his contract and re-sign with Miami unless James bolts for another city. In that case all bets are off. For the first time in four years Dwyane Wade is once again the most important member of the Miami Heat as his decision looms large over the future of the franchise.