Can Oakland finally get to the World Series? 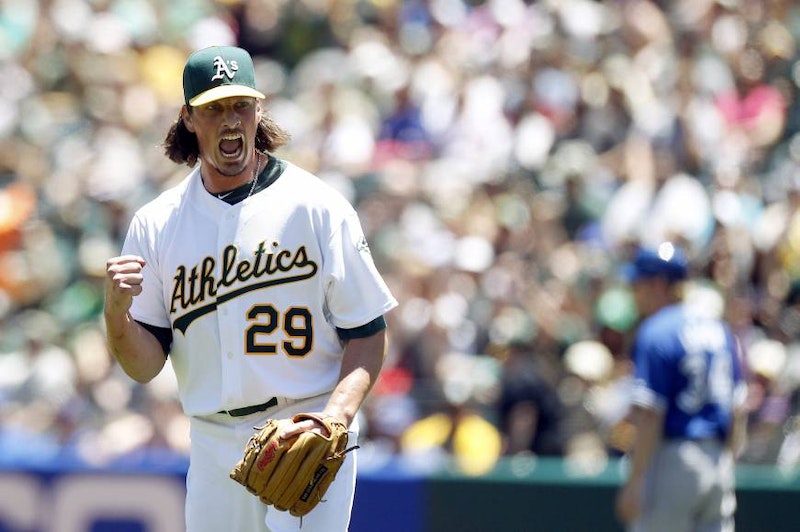 The Oakland Athletics and Chicago Cubs startled the baseball world with last week's blockbuster deal. The A's acquired former Cubs' ace Jeff Samardzija and Jason Hammel in return for a package of prospects. The trade helped the Cubs further their ongoing rebuilding efforts and gave Billy Beane's Athletics the pole position in the American League.

The Cubs' desire to trade Samardzija was no secret with rumored deals going back to the offseason. The general line of thinking had been that Chicago, already overflowing with premium offensive prospects, would deal its ace for a package of high-end young hurlers. Toronto, a surprise contender in the weak American League East, had appeared to the frontrunner for Samardzija with young starters Marcus Stroman and Aaron Sanchez rumored centerpieces of a deal. The Jays missed out on Samardzija and must now make the Rays an outrageous offer for the Rays’ David Price or go fishing for lesser arms.

Up until last week Hammel was one of the best second-tier pitchers on the market. Hammel signed a one-year deal with Chicago in the offseason following a disappointing 2013 campaign in Baltimore. Hammel rebounded for the Cubs as he and Jake Arrieta pulled double duty starting games for the Cubs and haunting the dreams of the Orioles' faithful. The fact that Beane was able to acquire Hammel along with Samardzija was a double whammy for the Blue Jays and other AL contenders in New York and Los Angeles. Oakland capped off the indignity with a weekend sweep of the Jays.

After more than a decade of playoff disappointments, and a brutal Spring Training that saw his team lose 40 percent of its projected starting rotation to surgery, Beane pulled the trigger on the Samardzija blockbuster agreeing to deal a package built around prized 20-year-old shortstop prospect Addison Russell. The trade makes the Athletics the runaway favorite in the AL West and dampens the trade deadline hopes of the Blue Jays, Yankees, and Angels. The Yankees' loss of C.C. Sabathia, and possible Tommy John surgery looming for Masahiro Tanaka, has all but removed New York from serious World Series contention. The Tigers have been Oakland's postseason nemesis over the past few seasons but the ongoing struggles of Justin Verlander coupled with the Samardzija trade has closed the gap between the two clubs. Oakland has the arms in Samardzija, Sonny Gray, and Scott Kazmir to go toe-to-toe with the Motor City in October. The Red Sox bubble has burst after last season's unlikely World Series victory. Baltimore's recent hot streak has propelled Buck Showalter's squad to the top spot in the East but barring quick turnarounds for Chris Tillman and Ubaldo Jimenez the Orioles probably won't have the pitching to knock off Oakland in a short series.

Beane's willingness to deal Addison Russell, along with Single-A outfielder outfielder Billy McKinney and a pretty good pitcher over the past few seasons in Dan Straily, is a calculated risk. With Boston, New York and the pitching rich Tampa Rays either out of the race or teetering on irrelevance Beane could see another playoff tussle with Detroit on the horizon. Russell is the type of premium young talent that small budget clubs like Oakland need to produce in order to consistently contend, but Beane's A's are ready to win now. Russell could emerge in the very near future as a cornerstone in Chicago but Beane is banking on his newly constructed rotation pitching Oakland past the American League's flawed contenders and into the World Series.