Proud to be a Dumb Ass 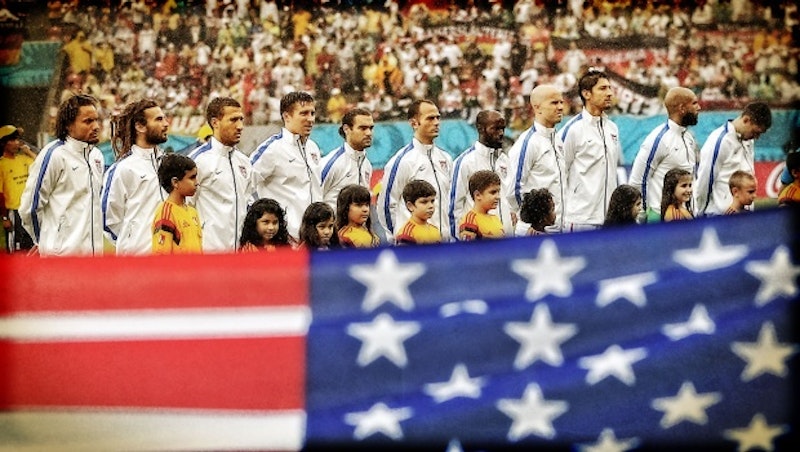 A rather infamous cartoonist friend of mine used to stand in the middle of Bedford Ave. during the Revolutionary War-era gentrification of Williamsburg, Brooklyn (circa 1990 or so) and scream at the new Bohemians: “Nobody in this mall understands my art pain!” This man was Tony Millionaire.

After the group stages of the World Cup dealing with dumbfounded journalists and FM radio DJs and sports talk radio troglodytes, I now know Tony’s pain. He was mocking their mockery of the irony of the mockery of a lie of a sham. The “look at me, don’t look at me” crowd.

When the U.S. soccer team advanced to the knockout rounds of the FIFA World Cup on Thursday, almost every pundit took the bait because we lost to Germany 1-0 and had only “tied” Portugal a few days before. (It is called a draw, not a tie. Is that so hard to remember?) Because of the loss to Germany, the Fred-to-Barney crowd says therefore the U.S. is not worthy of advancement because of the pre-school era “game by game” American sports fan arithmetic. In this country, apparently every “tournament” has to be March Madness style bracket simplicity, otherwise, well, it just takes too long to figure out. And by that time, most of the hacks have produced the ancient and trite complaints about soccer (not enough “scoring” or “action” and the players dive and fake injuries and the clock isn’t precise, etc). Yet every Winter Olympics, these same hacks jump on the curling bandwagon with similar faux naiveté mocking the “shuffleboard on ice” bromide they created to placate their own ignorance.

Forget the fact that the World Cup soccer tournament has had this group stage format for decades, each time around every formerly competent sports journalist or pundit all of a sudden turns into Chauncey Gardner with a sort of dumbfounded “how do they do this again” idiocy spilling off their keyboards or into their microphones. Not to mention an old college try with a dumb infographic by The Onion, an extreme strike-out column by Iron Maiden mascot Ann Coulter and laughable pre-Alzheimer’s excursions by WFAN radio retiree-in-waiting Mike Francesca (“they kick with both legs?”).

We live in a sports era of the Bowl Championship Series algorithm disasters concluding an interminable season of NCAA football, NFL wildcard scenario combinations spun off from every game after Week 12, and fake NFL and NBA drafts published online with the gravitas of the Pentagon Papers. Major League Baseball also has an October rush to the slide rule when its own Wild Card selections face a seven-sided Dungeon Master’s polyhedral dice roll of tiebreaker devices. Yet apparently this worldwide tournament dating back to 1930 not only cannot agree to an official “name” of the sport, its format is just too complex for Joe Fan to follow with any due diligence or iota of intelligence? Wha? I thought we got over this back when we hosted the damn thing in 1994? Wrong again.

Even the heady Keith Olbermann fell for the redneck “this ain’t sports” bait, leading his Thursday night ESPN broadcast with an embarrassing knee-jerk Jon Stewart imitation of how it didn’t seem right that the U.S. fans celebrated the team’s advancement after losing to Germany. It is a big picture/small picture thing, and though he would like to have us think he’s as big as his ego, Olbermann took the small route: When in doubt, mock the format of a tournament that is thankfully not controlled by U.S. sports executives (read: television poobahs pulling the moneybag strings). Keith even threw in some Cornell football anecdotes just to remind us that he is smarter than us and even he thinks this whole World Cup group stage thing is so strange and foreign, so something must be wrong if you don’t score a touchdown worth of goals in every game.

I’ve been watching Univision most of the time to avoid the “storyline” ESPN angles rigged to the feeding tubes held by the otherwise excellent game announcer Ian Darke. His partner Taylor Twellman does what every bitter former U.S. player from the previous decades does: predict doom at every turn. The proven failure Alexi Lalas even predicted from the onset of the tournament a U.S. ouster from the Group of Death “because the other teams are too strong.”

I guess you were wrong again, Lalas, almost as bad as your non-participation in the 1998 World Cup disaster for the U.S. team. Go back to bar-hopping in Hoboken with your jam band. This U.S. team is special to me because I feel like I grew up with them. I was at Michael Bradley’s first game as a pro for the MetroStars back in 2004, the same year I saw a skinny Clint Dempsey plying his trade for the MLS New England Revolution. And that was just a year after MetroStars keeper Tim Howard, yet another Jersey kid, made his glorious transition to Manchester United after several swell seasons making saves in Giants Stadium in front of sparse soccer-loyalist crowds who indeed had a great deal of art pain.

I’ve taken quite a liking to the ESPN radio crews, having spent the past 10 days or so driving a taxi listening to the World Cup games on a static-strewn Mercury Grand Marquis radio. Ross Dyer and Shep Messing is an absolutely fabulous tandem at calling the games. Dyer the Englishman who toiled in lower division team public relations has a plumy tone offset by his extreme eye for detail. Messing plays the role of the lumbering American keeper ready to lend a hand when needed, with just the right amount of jaded cynicism.

I had previously warned in this space of the prowess of Belgium to go far in this tournament. Unfortunately, the U.S. (Tues. July 1 at 4 p.m. on ESPN) will have to stop them via penalty kicks after full-time and then advance to face Costa Rica who will beat Mexico who will shock the Dutch—well, let’s not get ahead of ourselves. One game at a time, as the cliché goes.