One More Reason for Tony Sanchez to Hate the Yankees 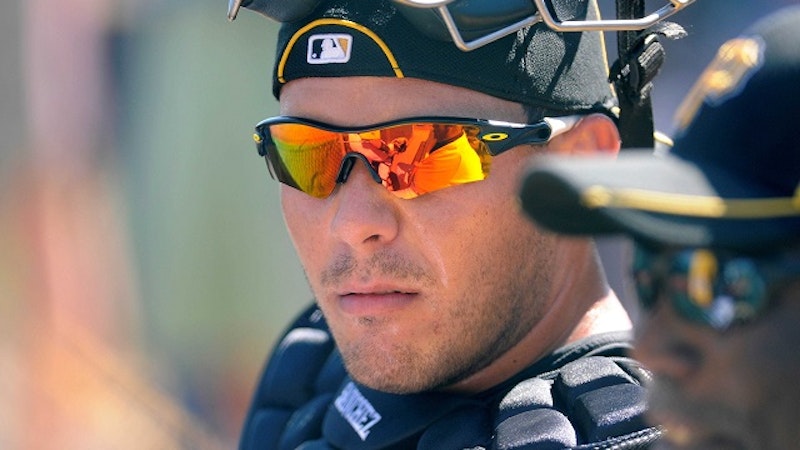 The Pittsburgh Pirates acquired catcher Francisco Cervelli in a trade with the New York Yankees earlier this week. The Cervelli acquisition provides the Pirates with some insurance behind the plate should Russell Martin depart as a free agent. The assumption is that Martin will bolt from Pittsburgh for a fuller checkbook in Los Angeles, Chicago, or possibly Toronto. The Cervelli trade also gave Pirates' catcher Tony Sanchez another reason to hate the Yankees.

If there's anyone with more pent-up Yankees hatred than me it's probably Sanchez. Cervelli's arrival marks the third time in three off seasons that the Pirates have acquired a catcher formerly of the Yankees. Each time the catcher has jumped Sanchez in the franchise's catching pecking order. Two years ago it was Martin, who signed with Pittsburgh as a free agent after two lackluster seasons in the Bronx. Last winter it was Chris Stewart, dealt from New York to Pittsburgh to serve as Martin's backup. Now with Martin probably out of the way Sanchez must contend with Cervelli. Pirates GM Neal Huntingdon apparently has a strange fetish for Yankee backstops. I can only assume he wears a Thurman Munson jersey under his suit.

The Pirates publicly claim they’re still in on the Martin sweepstakes which is a public relations necessity. A return to Pittsburgh seems like a longshot for Martin, and that might be a positive for the Pirates. While Martin's potential departure has fueled some nonsensical huffing and puffing about baseball's need for a salary cap, an investment of more than $70 million for the soon to be 32-year-old Martin is probably a bad idea for any team regardless of their financial status. Someone will give him a huge contract based largely on his defensive abilities and the career season he posted at the plate in 2014. Two years later that team will be criticized for handing out such a deal to an aging catcher. Martin's history tells us he's unlikely to come close to matching last season's offensive output ever again. He hadn't put up numbers even close to his 2014 stats since 2007 when he was with the Dodgers.

While Martin is wearing Dodger, Cubs or Blue Jays blue next season Tony Sanchez will be left to battle with a pair of former Yankees for playing time. Sanchez was Pittsburgh's first round pick (fourth overall) in the 2009 draft. Despite posting solid offensive numbers at Triple-A over the past three seasons, Sanchez has been unable to establish himself at the big league level. While Martin's presence in the Pirates' lineup blocked Sanchez the youngster didn't do himself any favors behind the plate. Sanchez threw out just eight of 63 runners in Triple-A. He hasn't been much better in the majors, cutting down just four of 27 base stealers over parts of the past two seasons. Sanchez will need to improve behind the plate in order to hold off Francisco Cervelli and get the opportunity to prove himself at the plate for the 2015 Pirates.