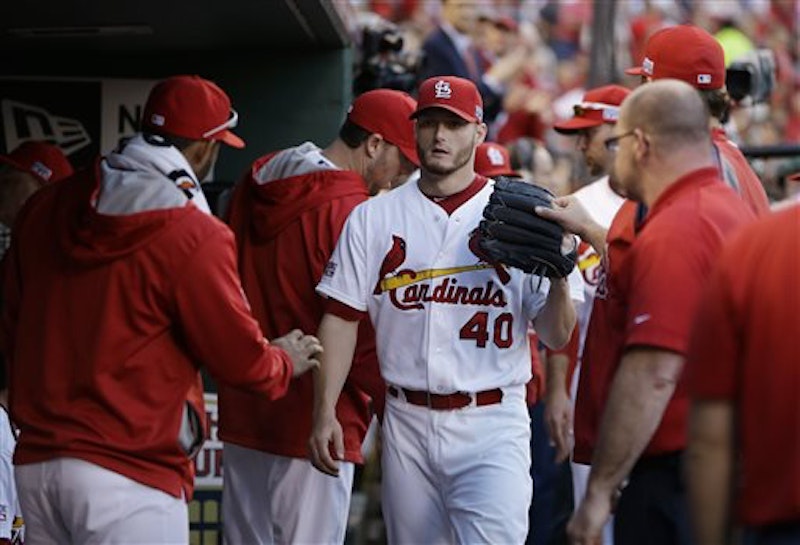 The Atlanta Braves and St. Louis Cardinals pulled off a stunning trade earlier this week. On its surface the deal was a headline grabber that featured two young, dynamic talents. Dig a little deeper and it's clear that two franchises headed in different directions just swapped headaches.

The Braves sent former All Star and Gold Glove right fielder Jason Heyward to St. Louis for 24-year-old right-hander Shelby Miller. Heyward was billed as the best thing to hit Atlanta since Chipper Jones and his stat line from his 2010 rookie season was packed with promise. After posting a .849 OPS with 18 home runs and an above average OPS+ of 131 as a 20-year-old, Heyward had the makings of a superstar. He was destined to be a fixture in Atlanta’s outfield. But Heyward never became the next Ken Griffey Jr. He regressed as a sophomore then plateaued posting OPSs of .814, .776, and .735 over the past three seasons. Those numbers make Heyward a slightly above average offensive right fielder with a plus glove along the lines of Nick Markakis. As a 25-year-old just one year removed from free agency, Heyward presented a dilemma for the Braves.

Atlanta and Heyward reportedly broke off contract extension talks before the 2014 season when the team suggested that he wasn't interested in extending. Following the trade, Heyward said that he was interested in a long-term commitment in Atlanta. In truth it sounds like Heyward wanted to be paid for what he might do and the Braves wanted to pay him like the player he is today. Heyward will get the chance to go to St. Louis and prove that he’s still progressing as a hitter and worthy of a long-term deal for mega bucks. The Braves have moved on, no doubt dissatisfied that Heyward failed to fulfill his promise and was ultimately surpassed by Freddie Freeman in the organization's pecking order.

Heyward will be an intriguing case next offseason. If he posts solid offensive numbers in St. Louis he'll be in line for a potential windfall in free agency. As a 26-year-old free agent with on-base skills and superior defensive ability he would compare favorably to Carl Crawford. The Red Sox gave Crawford a seven-year $142 million deal following his age 28 season. Heyward will be two years younger than Crawford was when he reaches free agency. Dave Cameron of Fangraphs makes the case that Heyward could be baseball's next $200 million man. As we look at Heyward's current body of work such a deal seems out of line but his skill set, age, advanced billing, and the fact that few 26-year-olds make it to free agency set him up to be next off season's biggest winner.

In return for Heyward, Atlanta acquired Shelby Miller, a big Texas-bred workhorse who finished third in the 2013 Rookie of the Year voting. Miller won 15 games as a rookie before he was shut down late in the season after working more than 170 innings. Miller was relegated to the sidelines as the 2013 Cardinals lost to the Red Sox in the World Series. Miller came back in 2014 to win 10 games and make 31 starts but his peripheral stats showed a marked decline. Miller's strikeout rate dipped from 8.8/9 innings as a rookie to 6.2/9 as a sophomore. His walk rate also rose from 3.0/9 innings to 3.6/9 innings. Miller's 3.74 ERA was respectable but his

Miller's inclusion in such a deal is surprising. The Cardinals seemed to be building a rotation around Miller and Michael Wacha behind Adam Wainwright as recently as a few months ago. Now, Miller’s been sent packing for a one-year rental. Both sides are assuming considerable risk with this trade, but given that Heyward will likely bolt next offseason for a contract well beyond the Cardinals means the decision to include Miller could come back to haunt them. Miller, even if he doesn't reach his ceiling or repeat the excellence of his rookie season, figures to be a dependable league average innings eater. There's tremendous value in such a pitcher. With Miller under Atlanta's control for another four years he gives the new John Hart-led front office the chance to rebuild a starting rotation ravaged by injuries.