Baltimore ought to break the bank for Yasmany Tomas. 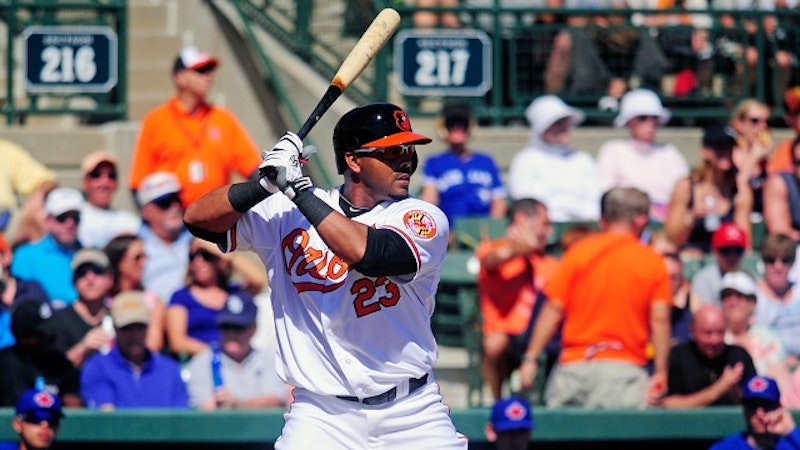 The Baltimore Orioles enter the offseason with several major question marks. The injury status of Matt Wieters and Manny Machado will likely be the focus in Spring Training but for now all sights are on the free agent status of Nelson Cruz and Nick Markakis. The popular sentiment will be to keep the homegrown Markakis in the fold and to write a huge check to keep baseball's reigning home run champ in orange and black. Sentiment is okay for fans but it sunk the Philadelphia Phillies. The Orioles, headed by AL Executive of the Year Dan Duquette, are unlikely to make any knee-jerk, sentiment-driven investments.

The return of Markakis has generally been regarded as a done deal. The team predictably declined their $17 million option on the right fielder for next season in hopes of striking a long-term deal at a more reasonable rate. Markakis bounced back from a dismal 2013 season to post above average numbers (107 OPS+, .729 OPS) last season. He moved from a run production role to the leadoff spot in the lineup and collected the second Gold Glove of his career. Markakis is a beloved figure in Baltimore for his dedicated service through the team's lean years, stoic demeanor, and monosyllabic interview skills. The average fan probably thinks the O's should keep Markakis regardless of the price, a concept the right fielder and his agent would no doubt endorse. Markakis was paid $15 million in 2014. Given his age (30), bounce-back season, and clubhouse presence the Orioles are hoping to strike a deal in the range of $48 million over four years. The Mets, who were once considered a strong contender to sign Markakis, are probably out after Monday's signing of Michael Cuddyer.

While Markakis seems likely to return to Baltimore, the case of Nelson Cruz is unclear. Cruz ended up in Baltimore last winter on a one-year contract after entering free agency with hopes of landing a five-year/$75 million deal. The Orioles rode baseball's best bargain all the way to the ALCS. The 34-year-old Cruz is once again a free agent and according to reports he's once again looking for a long-term deal worth more than $70 million. He won't get that deal from Baltimore and could be in for another long winter.

Cruz is limited defensively and is best suited for full-time designated hitter duties, confining his appeal to American League clubs. Cruz is also coming off his best offensive performance since the 2010 season, and given his 2013 Biogenesis related suspension, could be viewed with suspicious eyes. With Victor Martinez and Billy Butler, a pair of similarly lead-footed sluggers, crowding the free agent market Cruz is unlikely to secure the type of contract he seeks.

Cruz has reportedly already rejected a three-year deal from Baltimore. I doubt the Orioles will offer more than three years so the best chance for a return to the cozy confines of Camden Yards may have already passed. A report surfaced on Tuesday that Baltimore had made a similar three-year offer to Billy Butler. A move for Butler, who is even more defensively challenged and less offensively productive than Cruz, would make little sense for the O's. If the Orioles do break the bank for a hitter this summer they'd be wise to pool the money they've offered Markakis and Cruz and go all in for Cuban slugger Yasmany Tomas (who’ll soon be 24).

The price tag for Tomas is expected to exceed the $72 million the Red Sox gave to fellow Cuban defector Rusney Castillo a few months ago. The hype on Tomas is that he has prodigious power, a strong arm, and the ability to play right field or third base. While Tomas is probably a longshot to sign with the Orioles I'd much rather see the team invest $80 million in a dynamic, young, potential star than in a pair of aging players whose best days have passed.