Baltimore’s Chris Davis in a Quandary

Soon to be a free agent, the O’s slugger has to return to form. 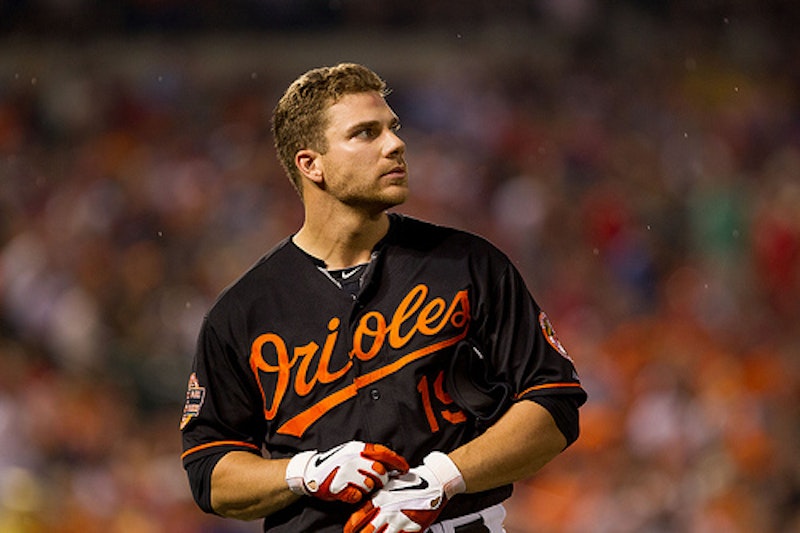 The 2013 MLB season saw the rise of Chris Davis. The former Texas Rangers farmhand began the season as a Baltimore fan favorite and ended the year as a bona fide star and burgeoning folk hero. Davis went on to lead the American League in home runs, RBIs, and total bases earning him the nickname "Crush." The 2013 season was so productive for Davis that a second player of the same name debuted in the National League and started bashing home runs for the Brewers. The Davises could do no wrong.

The 2014 season was a reversal of fortune for Baltimore's Chris Davis. The Orioles' slugger started slowly and never got on track. He struggled throughout the season, including a trip to the disabled list with an oblique strain. The man who had been portrayed as Baltimore's Superman was hitting just .196 in mid-September when he was suspended for 25 games for violating MLB's performance enhancing drug policy. The fall was complete.

A year ago people in Baltimore were clamoring for the Orioles to ink Davis to a long-term contract. The fear was that if Davis somehow built upon his stupendous 2013 campaign he’d price himself out of Baltimore when he was eligible for free agency. Now any talk of signing Davis to an extension worth more than $100 million would be met with great skepticism and the revoking of Dan Duquette's Executive of the Year award.

Davis is due for a raise through arbitration this winter with his price tag rising to upwards of $13 million. The team could non-tender the slugger but, given the paucity of true power hitters in today's game, such a move is unlikely. Davis will almost assuredly be an Oriole in 2015 with chips on both shoulders as he looks to redeem himself for the failures of 2014 and re-establish his value prior to becoming a free agent next offseason.

Davis' 2013 season was a career year but he still has great value as a hitter. Davis was often flustered by the extreme shifts that opponents deployed against him last season. Fans have to hope that a season of hitting under .200 will lead Davis to adjust his approach at the plate. The Orioles don't need a superhuman effort from Davis to compete next season. A return to his 2012 form (33 HRs, .827 OPS, 121 OPS+) would suit Buck Showalter and company just fine, as well as cushion the blow should Nelson Cruz depart.

The Hot Stove season has yet to really get rolling but the Blue Jays have already added Russell Martin. The Red Sox are wooing Jon Lester and Pablo Sandoval. The Yankees could make a run at Max Scherzer. The Orioles are clouded in uncertainty with Cruz and Nick Markakis on the open market. Despite what happens in free agency, the Orioles will add two impact players to next season's lineup in Manny Machado and Matt Wieters. It could be argued that there are no free agents available that are as impactful as Baltimore's rehabbing duo. If Machado, Wieters, and Davis can return to form in 2015, the Orioles' offense may not skip a beat.