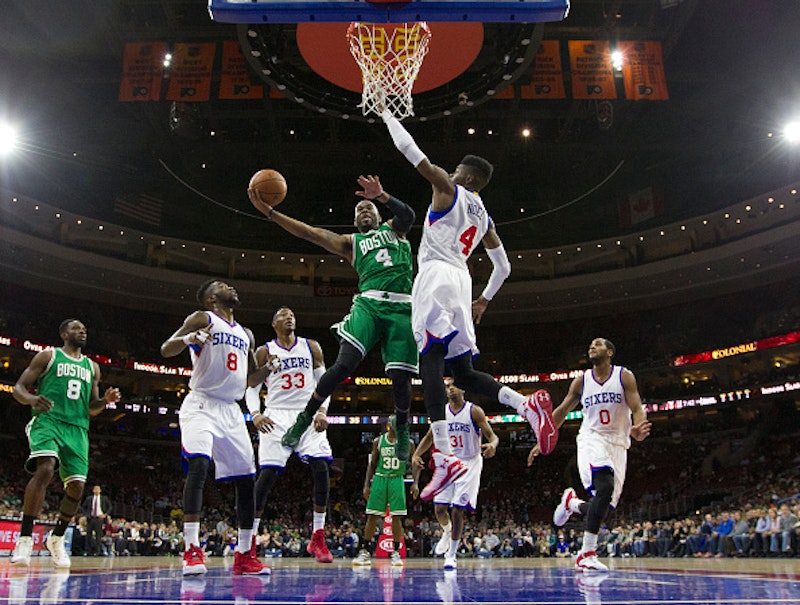 A real NBA game took place Wednesday night in Philadelphia. The real Boston Celtics played the real Philadelphia 76ers in a game that counted in the real NBA standings. The stats were accumulated by the official scorer and the numbers will count in the final season totals of all players involved. Real NBA players like Henry Sims, Hollis Thompson, K.J. McDaniels (read Zach Lowe's piece on McDaniels and contract negotiations among the non-lottery-bound young prospects of the NBA), and newly-arrived Robert Covington ("a name that would fit in Downton Abbey," my friend Eric noted) all competed in this NBA game.

The Boston Celtics beat the Philadelphia 76ers 101-90 at a mostly empty Wells Fargo Center (do you think Wells Fargo believes attaching themselves to the Sixers is actually helping their brand?) in Philadelphia. Official attendance: 12,701. Television view of crowd: mostly empty red seats with a few scattered lost souls milling about.

The few Sixers fans in attendance booed former-Sixer Evan Turner throughout the game. You might ask, "What did Evan Turner do to Sixers fans?" He was traded to Indiana last year, escaping the misery of Philadelphia's final 28 games. Before the season, point guard Jrue Holliday was sent to New Orleans. At the deadline, Turner and big man Spencer Hawes were traded.

Before the Turner and Hawes trades, the Sixers resembled an NBA team, going 15-38 in their first 53 games of the year. They'd lost seven straight games at the time. Their previous win had come against the lowly Celtics on January 29th. After they allowed their three best players to escape the tank, they lost in horrific fashion, as evil genius GM Sam Hinkie had planned. Their 16th win came on March 29th, two full months after win #15. Twenty-six straight losses tied an NBA record. Turner, the second overall pick in the 2010 draft, had several solid years in Philly. Not quite what they'd hoped with a second pick, but nowhere near a complete draft bust.

My guess is that Philly fans don't know who to boo, because they don't recognize most of their players, half of them going undrafted out of college, several of them unknown to even hardcore NBA fans. This leaves Sixers fans with no recourse but to boo former players lucky enough to have escaped, whom they do recognize.

Like they've done well most of the season, Boston shared the ball, no player taking more than 15 shots, while six players attempted nine or more.

• I hate to say it, but the Celtics will not play anything close to adequate defense as long as they play Olynyk and Sullinger together. Ideally, Olynyk becomes the sixth man, providing a lift to the bench.

• Phil Pressey is fun to watch, despite his physical limitations. When the Sixers commentators mentioned he was 5'11" I thought, "With his shoes on." Pressey desperately needs to add five feet to his range if he wants to stay in the league. Otherwise, he might be headed to Philadelphia in a trade soon.

Sixers coach Brett Brown has a career coaching record of 19-74, for a winning percentage of .204. This is not Brown's fault. Only Brian Winters, who patrolled the sidelines (no doubt with great sadness) for one full year in Vancouver and partial seasons in Vancouver and Golden State between 1996-2002) has a lower winning percentage (.196) than Brown among coaches who have coached more than 82 games.

I believe I saw Brown chomping on Zoloft during timeouts. It was interesting to see Brown trying to remain calm when his team led early in the third quarter. Brown was an assistant in San Antonio for over a decade, winning four championships with the Spurs. Talk about highs and lows.

The Sixers may break the NBA record for worst start to a season. Currently 0-11, the record is 0-15. Their upcoming schedule includes the Suns, Knicks, Portland and Nets. Will Brown bench Michael Carter-Williams and Tony Wroten (Wroten would actually be a valuable Jamal Crawford-type sixth man on a good team) against Phoenix and save them for the Knicks the following night? The Knicks may provide their only hope of avoiding an 0-17 start.

Michael Carter-Williams is a talented young guard (probably better suited to being a sixth man in the Shaun Livingston role) who has great athleticism and an enviable wing-span. He’s in a brutal situation for a young player with real potential trying to establish himself. He recently wrote about his frustrations.

In some games, there are no victories, only disasters averted. The Celtics averted this tragedy because of the performances of three players: Jared Sullinger, Brandon Bass and bench-spark Marcus Thornton. Sullinger was 10 of 15 from the field, collecting 22 points, nine boards and four assists without a turnover. Bass finished +19 with 23 points on nine of 13 shooting, with a block and a steal. Thornton added 13 points in 20 minutes, on three of five from deep and added four steals.

I really wanted the Celtics to enjoy this win. After several painful losses, I wanted to see some smiles. They were not to be found. I suppose it's hard to feel happy about averting disaster. Easier to feel relief.

I'd decided that if the Celtics lost this game, it would be time to slow this series of journal entries down, or at least, to swerve from the actual basketball games into diverse tangents that have little connection to the games. With this win, I can maintain a tenuous hold on my optimistic feeling that the Celtics will pull things together and grow into more confidence in December when the schedule eases up. Ten games down. Seventy-two to go. Nicely done, fellas.