Nuclear Winter For the Red Sox

It's definitely clean-up and rebuild time. 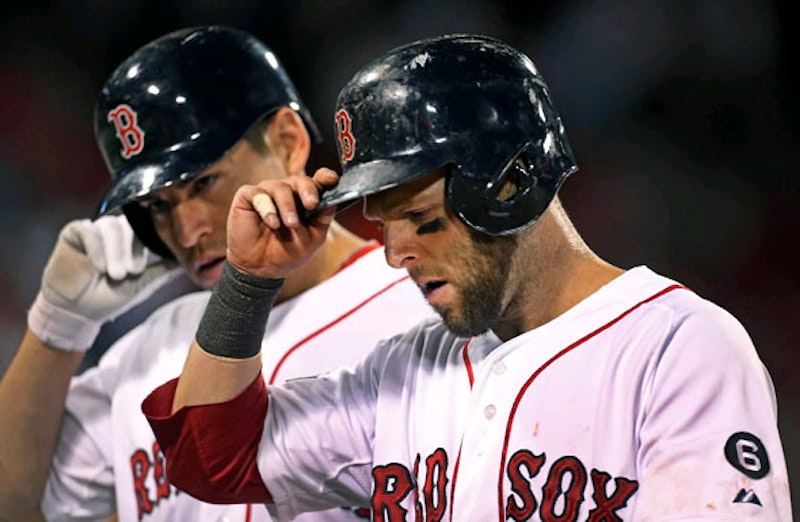 As most baseball fans know, the Boston Red Sox and Los Angeles Dodgers pulled the trigger on a staggering trade over the weekend. The trade sent Adrian Gonzalez, Josh Beckett, Carl Crawford and Nick Punto, and in excess of $260 million in guaranteed contracts, to L.A. in return for a few moderately regarded prospects and the under-achieving James Loney. The Dodgers and their new ownership group are clearly in a win-at-all-costs mode while the once free-spending Red Sox face an uncertain financial future.

The trade makes a lot of sense for the Dodgers. Gonzalez is an All-Star performer signed to a long-term contract, and is a Mexican-America star already well established in Southern California from his time with the Padres. Beckett, the symbol for everything that was wrong with the Sox, did not pitch well this season but is still just 32. The Dodgers are banking on Beckett experiencing a career renaissance as he escapes the slow-pitch softball environment of the AL East and makes pitcher-friendly Dodger Stadium his new home. Crawford bombed in Boston after signing a seven-year $142 million free agent deal prior to the 2011 season. He missed the first half of 2012 due to injury before posting modest numbers in 31 games, and recently underwent Tommy John surgery to repair an elbow injury and figures to be ready for Spring Training. The Dodgers will gladly pencil Crawford in the lineup in left field next to Matt Kemp in 2013.

The Dodgers made a clear statement that money is no object in their attempt to deliver post-season success. Just as the cross-town Angels spent big last winter the Dodgers are making early withdrawals on what figures to be a massive TV deal. The Red Sox, on the other hand, seem to be signaling signs of financial wear and tear after a decade of battling head to head with the Yankees and their bloated payroll. The trade with the Dodgers doesn't make the Red Sox a better team in the short term and could signify some rough sledding ahead for the Fenway Faithful.

The Red Sox brilliantly created the marketing phenomenon known as "Red Sox Nation." The legion of pink hatters will have their loyalty tested as the franchise marches into the wilderness of an unknown future. Former GM Theo Epstein got out just in time.

Boston's troubles began during the 2011 season when the team desperately needed to add a starting pitcher prior to the trade deadline. Epstein failed in his attempt to acquire Doug Fister from the Mariners and instead settled for fragile Erik Bedard. The mercurial lefty predictably underwhelmed the Sox with his late season performance. He missed time due to injury and was generally ineffective when he did manage to take the mound. Boston collapsed down the stretch. Epstein bolted for his new role as omnipotent Cubs' commander and manager Terry Francona was jettisoned from Boston amid a barrage of chicken and beer jokes.

The Red Sox and new GM Ben Cherington once again failed to address the team's starting rotation during the offseason. The decision to forego any rotation reinforcements, coupled with ownership forcing Bobby Valentine in as the new manager, gave the impression that Cherington was low man on the totem pole in Boston's management structure. The trade with Los Angeles should lead to further questions regarding Cherington's role in the Red Sox roster construction and whether the ownership group is driven by on field performance or the bottom line.

Valentine was a curious choice from the start. Hiring Valentine to reign over Boston's locker room was like hiring the Human Torch to manage a paper mill. The results have been predictable with the combustible Valentine drawing criticism for comments about players while his undermanned pitching staff has been lit up by American League lineups.

Cherington’s been lauded as a genius by some for the Red Sox/Dodgers swap, but isn’t yet worthy of any such praise. The trade of Gonzalez and company was clearly a financial bailout extended by the Dodgers to Boston. The Red Sox now have two choices; a complete and total rebuild that could take years, or re-entering the free agent market and signing multiple players to long-term deals not unlike the ones they just dumped on Los Angeles. With David Ortiz set to bolt as a free agent this winter and Jon Lester reportedly on the trade block, Cherington certainly has his work cut out for him. The upcoming free agent class is thin, offering little in the way of impact players.

It’s pretty clear that the Red Sox will be going the rebuilding route. Ownership jumped at the prospect of dumping $260 million in contracts and is probably already preparing the team's 2013 marketing slogan intended to keep fans engaged through the process. Perhaps Cherington and old pal Theo can compare notes. After shedding Kevin Youkilis, Gonzalez, Beckett, and Crawford, with Ortiz and Lester the next to go, these are not your girlfriend's Red Sox. I can't help but wonder how things would have been different if Boston had simply kept Francona in place and gone out and acquired a much-needed starting pitcher last offseason. Sox fans can ponder that question while they watch Clay Buchholz start on Opening Day and Cody Ross hit cleanup in 2013.