Not In The Cards 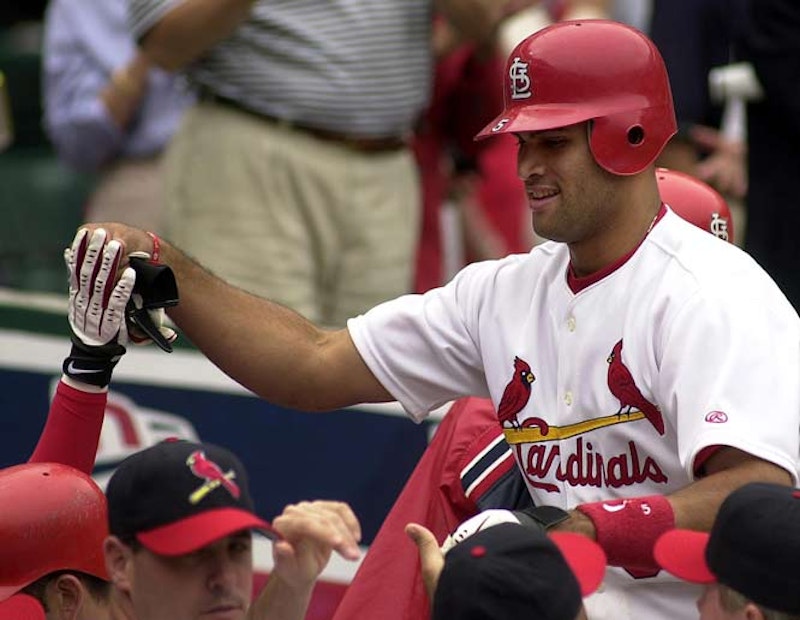 St. Louis just recently lost ace Adam Wainwright for the entire 2011 season to Tommy John Surgery. With an already top heavy and thus questionable offense, the Cards just saw their shot at contention go down the tubes. The wild card will most likely be going to an NL East team, so the only club in the Central that will be playing in October will be the division winner. Milwaukee has beefed up, Cincinnati has matured, and Chicago looks to be a little luckier at the plate. Even if Wainwright were on the mound every fifth game, it would be difficult to finish in first, and in no way a guaranteed thing.

It’s been a bad week for Cardinals fans; I think that’s obvious. Albert Pujols, perennial All-Star and MVP, announced that he could not come to terms with St. Louis regarding a contract extension and will be in fact headed for free agency. Most analysts believe that the inevitable will happen, and Pujols will re-up with his hometown team, but what if that doesn’t happen? If he isn’t a Cardinal in 2012, then he could very well be a Cub. John Mozeliak must have some sort of idea on how things will play, whether it be in their favor or not. The only thing worse than losing a franchise player to free agency is losing a franchise player to your archrivals. There’s two ways to prevent this from happening: extend him or trade him. If another team shells out the players and prospects to acquire the first-baseman it’s obvious that they would demand a negotiating window.

Realistically, St. Louis can’t afford Pujols. If they were to give him $27 million annually (which is accounting for deferred payments), they’d be committing over $90 million to 10 players, and they’ve never had a payroll above $100 million. When talking to the media, the slugger has mentioned that he would veto any trade, but that’s just poor business. It all depends on whether he’d be willing to move back to right or left field. If he is, his market expands exponentially. The Yankees, Red Sox, Tigers, and Angels would suddenly become suitors for him. It would also make the Cardinals decision to trade him a little bit easier. Obviously any and every team would graciously give up their farm system to host Albert Pujols, it all depends on the major leaguers they’d be ready to part with. If Carpenter, who’s getting old and expensive quickly, was included in discussions, then St. Louis would bring back a historic haul. For those two All-Stars, New York would be lucky to only have to give up Robinson Cano, Nick Swisher, and Jesus Montero.

If Mozeliak pulled the trigger on a deal of that sorts, there would be fan backlash, but not for long. The Cards would end up being a better, more cost effective team in the long run. Shelby Miller, their top prospect, will be able to replace some of the production of Carpenter, and with the financial flexibility, they’d have enough payroll space to negotiate a long-term extension with Wainwright. Montero will be tearing up the Major Leagues soon, and will be very comfortable at first base.