Give Up Albert Pujols

Why the Cardinals should let go of their famed all-arounder. 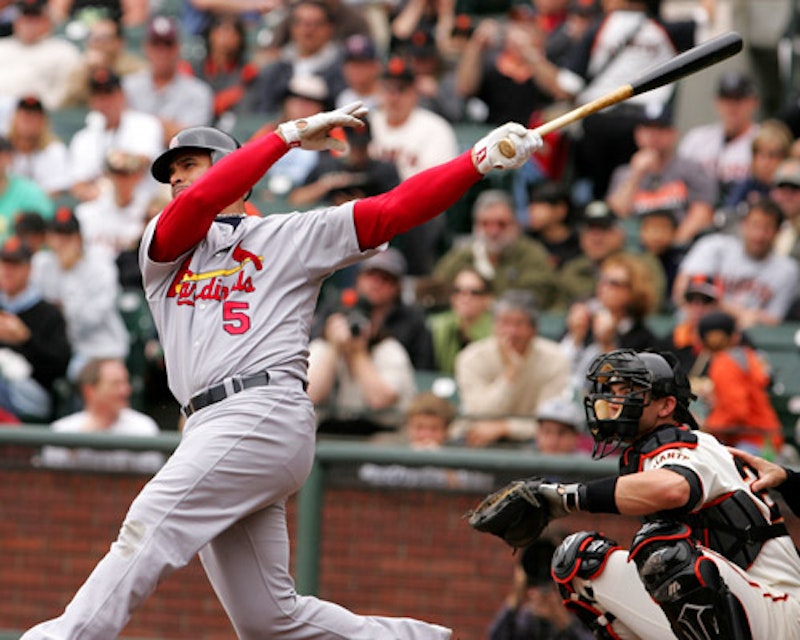 Albert Pujols is topping the headlines as MLB Spring Training camps open around Florida and Arizona. Pujols, a free agent after the season, has publicly stated that if he and the Cardinals haven't reached a long-term deal before he reports to camp on Wednesday he will shut down negotiations. Cardinal fans are rightfully up in arms and no doubt panicked about losing the best player in baseball. Pujols claims that he doesn't want to be a distraction during the season, but whether his agent and the club continue negotiations or not you can rest assured this process will be a distraction.

Pujols is likely one of the top five hitters of all time, and if he produces over the next eight years like he has for the past 10 he may make us all forget about Barry Bonds. I'm can’t say with certainty that Pujols is 100 percent clean, but to this point he hasn't been linked to any PED allegations despite running roughshod over the NL for a decade. He is by all indications a good guy, solid teammate and supporter of various charities. He also wants to be paid like the best player in baseball.

It seems like a simple enough request. Alex Rodriguez is currently the King of Contracts with his absurd 10-year $275 million deal with the Yankees. The deal will pay A-Rod, the confessed steroid user, over $27 million as a 42-year-old. Rodriguez is not the best player in baseball. He's no longer even in the discussion. The difficulty for the Cardinals is that Pujols wants A-Rod's contract, or better.

Who could blame him? The only problem is that when A-Rod signed his deal the Yankees were essentially bidding against themselves. There was no other serious bidder that we know of. New York has silly money and Hank Steinbrenner likes throwing it around like PacMan Jones in a titty bar. The Cardinals aren't likely to act in the same manner.

First, the Yankees are set at first base as Mark Teixeira has another six years and over $120 million on his contract. The Red Sox are reportedly set to announce an extension with Adrian Gonzalez at some point this spring. With the Yankees and Red Sox effectively removed from the Pujols sweepstakes, his likely suitors include baseball's second tier of the Rangers, Braves, Angels and Cubs. The Braves and Angels have never been huge free agent spenders and Anaheim just absorbed Vernon Wells’ bloated deal and have to work out an extension for pitcher Jered Weaver. The Rangers are a possibility but the franchise, now under new ownership, may be still be hung over from the original disastrous A-Rod contract.

That leaves the Cubs. The real question becomes how much is it worth to the Cardinals to keep their best player from joining their blood rival? The Cubs/Cardinals is one of MLB's best rivalries. It lacks the pure unadulterated Northeastern ferocity of the Yankees/Red Sox, or the incessant media obsession, but is no less intense or meaningful to the respective fan bases. The thought of Pujols in Cubbies blue is a worst-case scenario for the fans of St. Louis. It would be the modern day version of Babe Ruth being dealt from the Red Sox to the Yankees. And yet, it could be the best thing for the Cardinals.

St. Louis signed OF Matt Holliday last offseason to a seven-year $120 million contract. The prevailing thought at the time was that signing Holliday was an offering to Pujols to show that the team was serious about competing and enticing him to ink an extension. It's unlikely that Holliday's contract is affecting the Cardinals ability to offer Pujols a fair deal. There was a report earlier this week that the team has offered Pujols a five-year deal for $30 million per season. If Pujols insists on receiving the largest deal in MLB history then St. Louis should let him play out the season and file for free agency.
If the Cubs are willing to meet Pujols' request for A-Rod money—and Chicago has more than $40 million coming off the payroll after 2011—the Cards should let him walk. The team can truthfully claim they offered Pujols the $30 million per year he requested. They can depict him as the villain who followed every last dollar to the hated Cubs. Then the Cardinals can take their unspent millions and sign Prince Fielder for something in the range of seven years at $150 million and give ace pitcher Adam Wainwright to a huge extension.