With Zach Greinke and Shaun Marcum now in the line-up, 2011 is looking up for the Milwaukee Brewers. 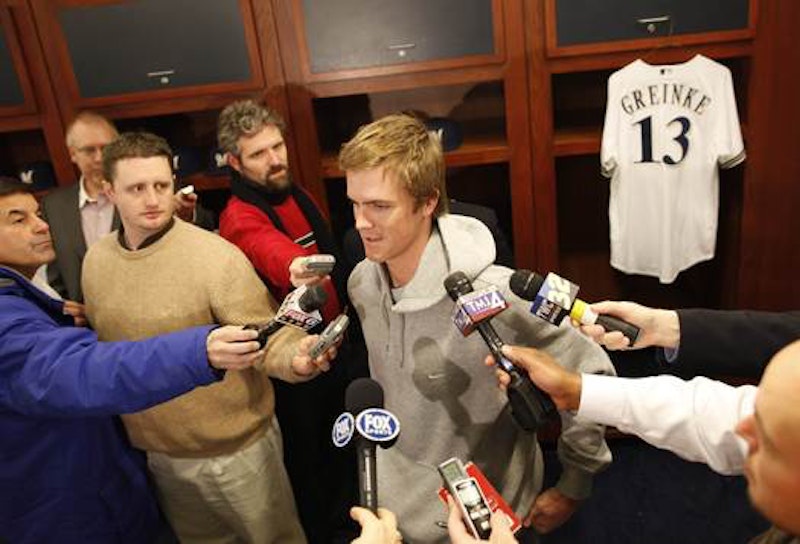 The Milwaukee Brewers and San Diego Padres entered this winter with similar dilemmas. Both teams play in winnable divisions, the NL Central and West respectively. Each team faced the prospect of losing their star first baseman to free agency after the season. The Padres blinked first. General manager Jed Hoyer predictably dealt Adrian Gonzalez to the Red Sox for three prospects. Hoyer previously worked for Boston and was well-versed on the jewels of the Boston farm system. In Boston the rich got richer. The Red Sox are expected to sign Gonzalez to a massive contract extension sometime this season. Meanwhile the fans in San Diego are left with a platoon of Brad Hawpe and Jorge Cantu at first and the hope that the return from Boston in exchange for Gonzales will pay off. Rebuilding springs eternal.

In contrast, the Brewers flew under the radar this winter, quietly amassing a playoff caliber starting rotation. After missing the playoffs in 2010 and with one year left on Prince Fielder's contract general manager Doug Melvin swung for the fences this offseason. Melvin unloaded five of the organization's top 10 prospects in trades to acquire starters Zack Greinke and Shaun Marcum.

The additions of Greinke and Marcum to a rotation that also includes budding star Yovani Gallardo gives the Brew Crew the chance to compete with the Cardinals, Cubs and Reds in the NL Central. The Cubs are coming off a lackluster 2010 campaign and feature the combustible Carlos Zambrano at the top of the rotation. The Cardinals also had a down year in 2010 and may be a team in turmoil this year with the uncertain contract situation of Albert Pujols and the scramble to replace the injured Adam Wainwright. Cincinnati was a surprise playoff team last season that relies heavily on youngsters Mike Leake, Edison Volquez and Johnny Cueto in the rotation.

In dealing for Greinke and Marcum the Brewers traded away five youngsters who were unlikely to help them in 2011. The best prospect they dealt was 21-year-old Brett Lawrie, who went to Toronto for Marcum. Lawrie is considered a premium offensive prospect who lacks a defined position. Keep in mind that for all his promise Lawrie posted a .797 OPS in AA last year with just eight homers and 63 RBI. Marcum, 28, went 13-8 with a 3.64 in the ultra-competitive AL East. Toronto may end up getting the better end of the deal, but it won't be in 2011. The players sent to Kansas City for Greinke may be even less likely to contribute than Lawrie. The only player who would've been a part of the Brewers this season is offensively challenged shortstop Alcides Escobar. Pitcher Jake Odorizzi is the best prospect the Royals received in the deal, but at just 20 years old he's at least two years from helping out the big league team.

Doug Melvin deserves more than an attaboy for his work this winter. Brewers owner Mark Attanasio also gets credit for allowing his front office to go all-in for 2011 in the hopes of making a playoff run before Fielder bolts. Some people will no doubt question the wisdom of dealing off a bunch of prospects only to see Fielder leave as a free agent. If the Brewers struggle out of the gate the critics will come calling. I get it. The conventional wisdom says you deal the player you won't be able to re-sign, stockpile prospects and wait until next year. That said, if I were a Brewers fan I'd sure like the idea of making a run with Fielder, Marcum and Greinke more than checking Baseball America to see how a bunch of 20-year-olds are pitching in A ball.