I Love Watching the Yankees Lose

The 2011 season won't be kind to the New York Yankees. 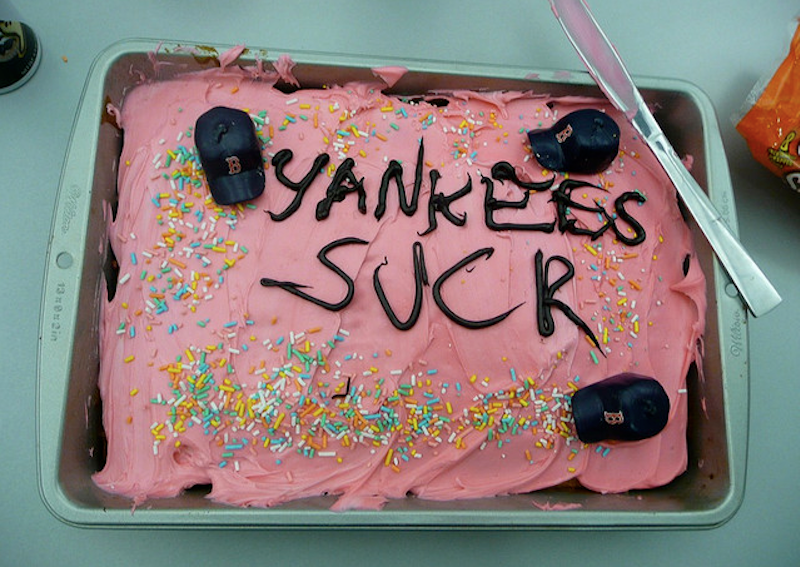 Possibly the most fun I’ve ever had at a baseball game was back in 2006. I saw the Yankees lose 17-2 to the Red Sox in New York from a seat high up behind home plate. I believe it was the 80th deck. Behind me was a single row of seats, a chain link fence a drop from which a man could be killed by falling change. Beer was selling for $14 a pop I wasn’t touching it. Also, I had to be sober enough to flee effectively if the Yankees won.

I wasn’t rooting for the home team so from their seats directly behind me a helpful mother and her six-year-old son kept me apprised of their thoughts on my homosexuality and IQ. They were only too eager to help me find my way back to Boston and shared unique insights into many of my favorite Red Sox players. For example, many Red Sox are apparently enamored with providing sexual gratification through oral stimulation. Who knew? Under her supervision I was called more nasty names by a pre-teen than if I’d shown up naked to a Tea Party rally carrying a NAMBLA sign.

By the fifth inning the Yankees were down 10 runs and he was really laying into me. What had begun as good-natured hatred was morphing into a well-rounded desire to see me dead. The fact that it was coming from the mouth of a child made me feel like I was living out an episode of South Park. My fear was it would soon change into violence and then what was I supposed to do? Hit a kid? Well, I rationalized to myself just in case, he is wearing a Yankees hat.

It never got that far. After yet another non-Yankee home run the mother and her demon removed themselves from the premises. Or it could have been my naked cheeks waving victoriously in the wind that sent them on their way. I can’t be sure.

I love watching the New York Yankees lose. My fascination with the Yankees may have to do with the old adage about keeping your friends close and your enemies closer. It might be because life is more fun when there is an enemy. Don’t believe me? Just ask Ronald Reagan. But mostly I like to think it’s because the Yankees are a giant circus.

Nothing is too big or too dramatic for the Yankees. They spend more money, win more games, and have won more championships than any other team. They are the biggest team in the biggest city, the cultural capital, of the country. Other teams’ executives get promoted for finishes for which their New York counterparts are fired. When they win it’s expected and when they lose it’s a calamity. Someone once said rooting for the Yankees is like rooting for US Steel. That was probably right on the money before US Steel shipped all its jobs to India. Also, nobody knows who or what US Steel is anymore.

It is a stepstool for my soul to watch the Yanks lose. And watching them get destroyed?  That’s like walking on a bed of air lined with gold and sex. It’s drinking a magic potion that tastes like root beer, makes you feel like you’re zonked on smack and has the effect of doing 10 sets of squats. Sure, it doesn’t happen frequently, but when it does you know hellfire is going to reign down upon the players and the executives. How do you not win the World Series with a payroll that exceeds $200 million? The Yankees are the only team who would know.

This off-season has been particularly splendid. Favorites for two of the best free agents on the market, the Yankees whiffed spectacularly on both. By waiting for the first they missed out on the second. Then when Cliff Lee said, “Thanks but no thanks, I’d rather live in Philadelphia,” the team signed relief pitcher Rafael Soriano for $35 million over three years. This is like coming in second for that well-priced condo on the beach, so you take the same money and drop it all on a big hat.

There is literally no way New York gets half that money’s worth in production in return for that ridiculous contract. It isn’t financially possible. While they were busy on what amounted to a rejection-fueled three a.m. candy bar binge, Andy Pettitte decided he’d rather spend his summer in the humidity, pollution and cultural destitution of Houston, Texas than earn $12 million pitching for the Yankees. That is news I can eat with a spoon.

Before he retired, Pettitte stood at a podium in the New Yankee Stadium (motto: Less like a shopping mall than you’ve heard!) and proclaimed he just didn’t have the fire anymore. Think he’d have had some more fire if the team had managed to blow another $300 million on free agents? It’s just a guess, but I’m going to say yes. The underlying message was clear, at least to me: I’m not coming back to finish in third place.

The Yankees have spent $200 million on a team composed of decomposing 35-year-olds and three-fifths of a starting rotation. But hey, they have a bullpen, so look out.

Six years later, the kid who heckled me with his mom at Yankee Stadium is now 12. Assuming he hasn’t come to his senses and renounced his citizenship in the US Steel fan club he’s probably pretty upset about this off-season. I’m guessing he could be very dangerous by now, so this is my formal apology to society. I should have taken him out when I had the chance. Sorry.