Cardinals Down, Not Out

Even without Adam Wainwright, the Cardinals are still in this. 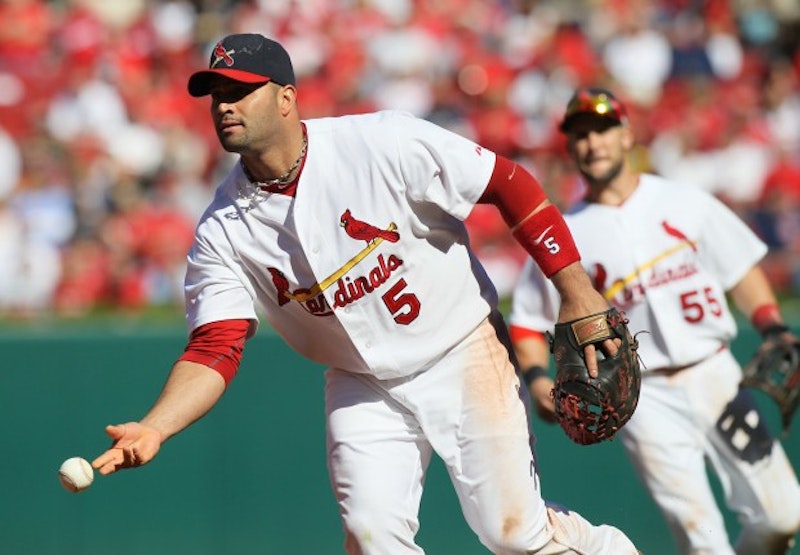 The loss of ace Adam Wainwright to Tommy John surgery was a gut punch to the St. Louis Cardinals, but not a deathblow. Wainwright is essentially irreplaceable, especially this close to the start of the regular season. He was the NL's Cy Young runner-up in 2010 after finishing third in 2009. You could make the argument that Wainwright was more important to the Cardinals’ title hopes than Albert Pujols.

Given all that, I think speculation of the Cards’ demise has been greatly exaggerated. If St. Louis had to battle the AL East all season then the loss of Wainwright would be fatal. But the NL Central is not the AL East. Sure, the Cubs have a huge payroll and added Matt Garza, but they have too much money committed to just average players. The Reds won the division title last year with a rotation that got a huge boost from some young pitchers that may have trouble duplicating that success. Milwaukee's rotation was abysmal in 2010, but they traded for Zack Greinke and Shaun Marcum. You could throw those four teams into a hat, shake it up and pull out your prediction for the division winner. Even without Wainwright the Cardinals still figure to be competitive.

As Opening Day quickly approaches veteran starters Kevin Millwood and Jeremy Bonderman remain unemployed. They're both coming off pretty rough 2010 seasons, but those stats were accumulated against American League lineups. The switch to the NL would be good for either of them. I'm not saying that Bonderman or Millwood can come close to replacing Wainwright, but they could give the Cardinals 180 innings of league average pitching, for a decent price. Manager Tony LaRussa has publicly stated that he will fill Wainwright's spot internally, but that could be a negotiating ploy to keep down the price of one of the available veteran starters.

The other thing to keep in mind is that LaRussa and pitching coach Dave Duncan have always pulled rabbits out of their hats and received great production from reclamation projects. If Duncan could work his magic with Millwood or Bonderman it would buy some development time for young hurlers Shelby Miller and Kyle McClellan. Miller is the Cardinals’ prized prospect and it's doubtful St. Louis would rush his ascent to the Majors as a kneejerk reaction to Wainwright's injury. Miller just turned 20 years old and hasn't pitched above the Midwest League. McClellan, 26, has spent parts of the last three years in the St. Louis bullpen and pitched to an impressive 2.27 ERA in 75 innings last year. It's possible that McClellan could be productive starter in 2011.

The other hope for the Cardinals is the continued development of lefty Jaime Garcia. He burst on the scene as a rookie last year winning 13 games and pitching to a 2.70 ERA. St. Louis will need Garcia to step up and fill the number two spot in the rotation behind Chris Carpenter. If Garcia can take next step into the 16-17 win range and Duncan can coax 180 productive innings from McClellan or one of the available vets the Cardinals may have enough to win the scrum that is the NL Central. Jake Westbrook will also be with the Cardinals for the full season in 2011. He pitched very well for the club last season after coming over in a trade from Cleveland.

With Albert Pujols' free agency looming, St. Louis should be in win-now mode. If they can stay in the race it's possible that they could add a veteran before the trade deadline just as they did with Westbrook last season. I know there are a lot of "ifs" but with no clear favorite in the NL Central even the weakened Cardinals will have a chance to take the division title. If they’re able to make the playoffs, that's when the loss of Wainwright will be too much to overcome. The Cards can be competitive without Wainwright but they won't win the World Series while he's rehabbing his elbow.