On the Deron Williams trade. 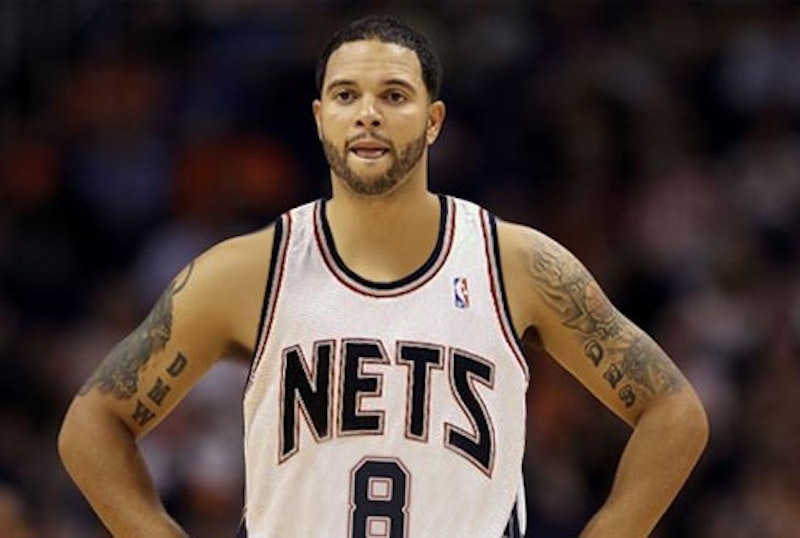 The New York Knicks did the right thing when they traded everyone not named Amare Stoudemire to the Denver Nuggets for Carmelo Anthony. The players they dealt are all replaceable parts and the draft picks have little value. Getting Anthony to play alongside Stoudemire gives the team two elite scorers and returns some excitement to moribund Madison Square Garden. On the downside, Anthony and Stoudemire aren't really known for their defensive prowess and Coach Mike D'Antoni's system seems to ignore defense entirely. New York won't overtake Boston and Miami playing matador defense.

Just days after finally completing the Anthony deal the Knicks were upstaged in their home market when the lowly New Jersey Nets went out and traded for All-Star PG Deron Williams. The move was a sucker punch to the Knicks. Not only did New Jersey get a better player than Anthony, they didn't have to give up as much. While Anthony can score with anybody in the league he doesn't necessarily make other players better. Williams does. In fact he may be the best point guard in the league. By trading Devin Harris, Derrick Favors and a #1 pick to Utah for Williams the Nets have acquired the new face of their franchise.

The Nets’ long-discussed move to Brooklyn will finally occur after the 2011-12 NBA season. Williams will become a free agent during the same offseason. While the NBA has an expiring collective bargaining agreement and uncertainty abounds, the consensus seems to be that the new CBA will make it easier for small market teams to retain their stars when they reach free agency. Dealing for Williams now is a brilliant preemptive strike by New Jersey. Not only did they make a better deal for a better player than the Knicks, they can offer Williams more than any other team when he becomes a free agent.

To make matters worse ESPN's Chad Ford reported that Knicks’ president Donnie Walsh preferred Williams to Anthony. Walsh was quoted to the effect that he didn't know that Williams was available. Seriously, Donnie? This isn't some auto-draft fantasy league you joined because your buddy needed 10 owners. If you coveted Williams then you should have called/texted/Facebooked the Jazz GM until he either filed for a restraining order or gave up Williams. Instead the Knicks were so infatuated and obsessed over the prospect of acquiring Carmelo that they were blinded to the situation in Utah.

The Knicks are better today than they were before the Anthony deal. They're probably no closer to winning a championship but they are relevant again, not just in New York but also across the league. The Melo/Amare duo are the new darlings of ESPN. And yet, the Knicks got snookered.

On a side note, the NBA's salary structure is a train-wreck. The list of deadline deals is a collection of head-scratchers with teams essentially giving away players and picks to clear cap space that they may or may not be able to use on a useful player in the future. When they can't lure the player they wanted they just end up throwing the money at the first guy in gym shorts who takes the deal, creating the next generation of bad contracts/dead money. I'm assuming that the new CBA will address some of the issues that have led casual fans like myself to basically tune out until the playoffs begin.

I'm a Miami Heat fan, an actual fan, not some guy who ran out and bought a LeBron jersey last July. I was playing full seasons of Tecmo Basketball with Jon Sundvold hoisting threes and Rony Siekaly roaming the paint in 1989. The absurdity of the league's economic system that has developed over the past 10 years has zapped my desire to follow the league on a regular basis. I have a family, a mortgage and three jobs; I don't have time to figure out who the Heat should use their mid-level exemption on or why they paid Mike Miller $25 million to play two minutes a night. If this is the kind of system that comes along with a salary cap I hope Major League Baseball never even broaches the subject.