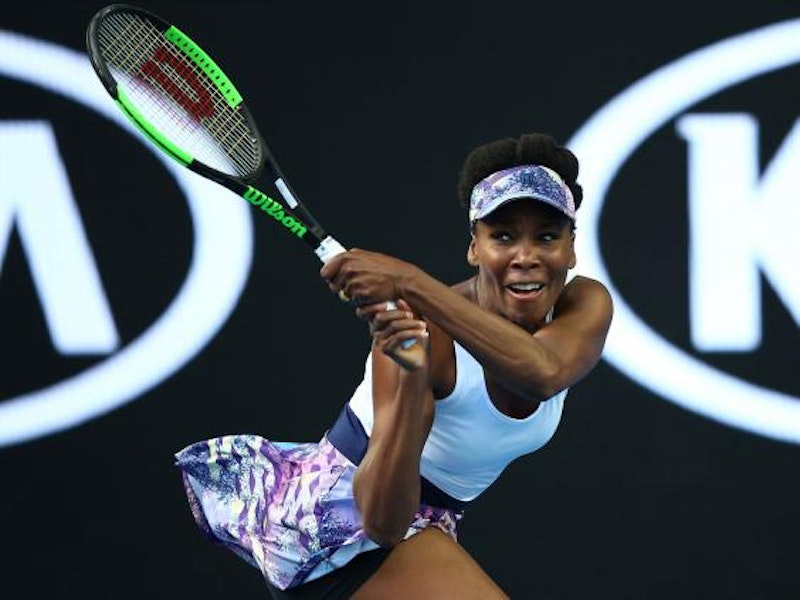 American tennis star Venus Williams brushed aside Swiss qualifier Stefanie Voegele on Wednesday, advancing to the third round of the Australian Open. At one point in the match, Voegele missed her first serve, prompting Williams to step forward to receive the softer second serve, a standard tennis tactic signaling aggression. ESPN tennis announcer Doug Adler called it like this: ”She misses a first serve and Venus is all over her. You see Venus move in and put the gorilla effect on. Charging.”

But did Adler really say “gorilla,” or was it “guerilla”? Both gorillas and guerillas can be aggressive, and they're listed as homophones in the dictionary, so only the announcer himself knows. The usual suspects on Twitter didn't even bother to ask one question, attacking the former All-American tennis player from USC for his overt racism in using “gorilla” in reference to a black woman. One of these people was Ben Rothenberg—a freelance tennis journalist and contributor to The New York Times—who quickly called Adler's remarks “appalling” on Twitter, adding, “Horrifying that the Williams sisters have to be subject to this in 2017.” Phrasing it this way, Rothenberg (who declined to comment) lumped this particular instance of what he'd determined to be racism in with all the other real race-based mistreatment the Williams sisters have been subjected to. This is business as usual on standard-free social media, but it's unacceptable when a journalist who represents the Times neglects his due diligence.

Because the number-two tennis writer for The New York Times jumped to the conclusion that Adler made a racist, animal reference, a number of high-profile media outlets picked up on the story, quoting his unsubstantiated words. In fact, Adler has since clarified his comments, credibly explaining that he was using “guerilla” in reference to Venus’ aggressive style of play.

This controversy illustrates a couple of bad tendencies in modern life. It's an example of the social media mob mentality that loves nothing more than tearing people down, especially if race is involved. A certain bloodthirsty Twitter crowd, convinced they had all the information they needed, called for ESPN to fire Adler. For all they knew, Adler might have a black wife or black adopted children. None of that mattered.

And then there's current preoccupation of the political left with shouting “racism” first and asking questions later. Slate contributor and CBS political analyst Jamelle Bouie, for example, wrote a post-election article claiming that there are no good Trump voters, implying that they're all racists. Bouie’s too cocooned in his progressive safe space to realize that his sort of mentality actually helped Trump get elected. Rampant finger-pointing on racial issues fans the flames of racial tensions, while simultaneously devaluing the message when there's an actual valid point to be made.

Suggesting that people are racists is a powerful weapon. Charging someone with racism without hard evidence is unethical, but ironically it's almost always done by progressives who consider themselves ethically superior people.

Some of Adler's critics have granted that he didn't say gorilla, but faulted him for using a word that could be construed incorrectly as a racial smear. Essentially, sportscasters can now no longer apply the word “guerilla” to the tactics of a black athlete. They've been robbed of some expressive language for no valid reason, because they'd have to be reckless to put themselves in the crosshairs after Adler’s ordeal.

Responding to Rothenberg's tweet calling Adler’s comments appalling, someone asked if he could’ve been saying “guerilla” instead. Rothenberg’s reply: “Doubtful.” You simply can't call yourself a journalist if you talk like this. Your job as a journalist is to find out. It was never doubtful to any objective listener of the audio. How hard can it be for a journalist to walk over to the broadcast booth and ask a veteran, respected professional what he really meant? An ESPN spokesperson told Fox that Adler should’ve been more careful with his word choice and that they've removed him from the broadcasting booth. I've been reading the Times’ unparalleled tennis coverage for over 20 years, but I never imagined I'd see the day when one of their tennis writers would be partially responsible for a broadcaster losing his job for absolutely no reason.