Jose Bautista’s No David Ortiz, But His Lack of Suitors Is Baffling

Bautista's bat will age well. Why has no one signed him yet? 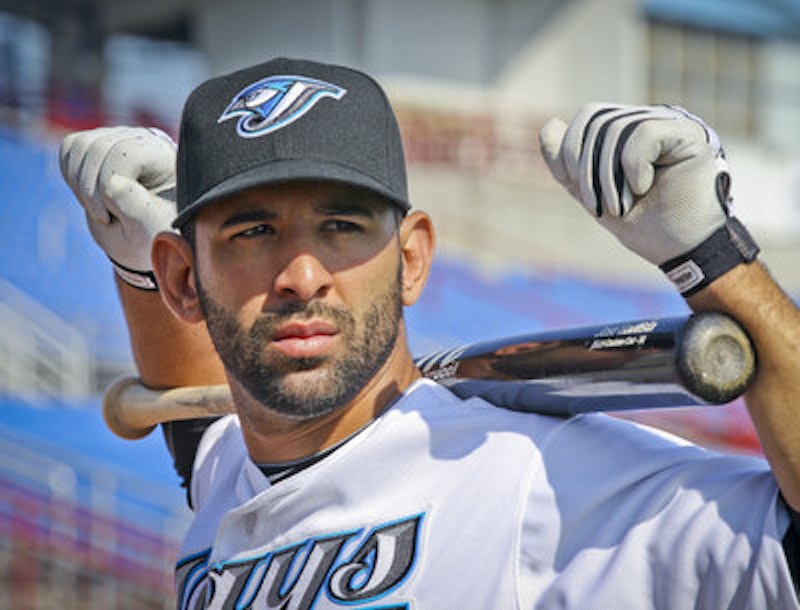 Versatile hitters tend to age well. David Ortiz finished his age-40 season with a 163 wRC+ while logging 626 plate appearances; he posted a wRC+ below 134 only twice in his 14-year Red Sox career, during his relative dry spell of 2008-2009. Ortiz is an anomaly, of course, both on the field and off, a once-in-a-generation player who was as quick to anger as affability, whose sheer lovability made sportswriters forget that he tested positive for PEDs in 2003. But Ortiz wouldn't have become the Unofficial Ambassador of Baseball without consistent performance at the plate.

For the last six years or so, rival fans have begun spring training with the same question: will finally this be the season that Ortiz breaks down? They should’ve looked at his offensive profile; in Baseball Between the Numbers, Nate Silver argues that "players who hit for both contact and power, [with a sharp batting eye], age much better than players who have just one of these skills." Sturdiness is also a factor, as Ortiz rarely played fewer than 140 games.

He's a rare hitter, but not alone in sustained dominance. Players like Barry Bonds, Mickey Mantle, Stan Musial, Manny Ramirez, and Ted Williams all continued to hit at an elite level through their late-30s. Comparing Ortiz to some of the greatest hitters of all time might seem inapposite, especially considering that his 140 wRC+ doesn't compare to Bonds or Williams', which clock in at 173 and 189, respectively. But if you only account for Ortiz's tenure with the Red Sox—his major league career effectively began in 2003, when Grady Little installed him as permanent DH on June 1st—then his wRC+ moves up to 146, much closer to Musial (157) and Ramirez's (153) career numbers.

Surely, if he hadn't retired, and the Red Sox, for whatever reason, showed no interest, a healthy free agent market would have developed for Ortiz. After all, Carlos Beltran—an inferior hitter in all respects—signed a three-year, $45 million contract with the Yankees before his age-37 season. At the end of 2016, just five months shy of his 40th birthday, Beltran signed a one-year, $16 million contract with the Astros.

Why, then, is Jose Bautista still looking for a job?

Bautista and Ortiz are similar players: they both bloomed relatively late in their careers after bouncing around a few teams, and have patient, powerful offensive approaches. Ortiz makes better contact, but Bautista walks more frequently. Bautista has a 142 wRC+ since joining the Blue Jays in 2008. That number jumps to 152 when you start with 2010, his breakout year, and the first full season he used his now signature leg kick.

There's a key difference between the two, though: Bautista is far more injury-prone. He's played just two full seasons in the last five years. Additionally, he's coming off a disappointing 2016, an injury-riddled year when his batting average slumped to .234, his isolated power to .217, and his fWAR to 1.4.

This winter's weak free agent market—Yoenis Cespedes is the only player who has signed a contract exceeding $100 million—can only be partly blamed on its dearth of elite, well-rounded talent. The new Collective Bargaining Agreement has cast a pall over the entire offseason. Large market teams expected the luxury tax threshold to be raised significantly; it wasn't. Bautista wasn't the only player this affected. His former teammate, Edwin Encarnacion, recently signed a three-year, $60 million contract with the Indians, a figure well below most predictions.

This means that Bautista will not only have to sign a one-year deal, he'll most likely have to settle for a salary below the $17.2 million he turned down in November by rejecting Toronto's qualifying offer.

With that in mind, are everyone's budgets so strapped that they can't afford a $15 million flyer? Are teams really so concerned about losing a draft pick? If healthy, there's no reason to believe Bautista won't post a wRC+ above 140, like he's done in every full season he's played since 2010. Even if he does get sidelined on the DL once or twice—which is probable, given his age and history—his 1.4 fWAR from 2016 represents a nadir. His injury-shortened 2012 and 2013 seasons produced 2.9 and 4.3 fWAR, respectively.

A one-year deal would also provide motivation: statistically, players perform better when their contracts are expiring. If some team doesn't act quickly, then the Orioles—those perennial bargain hunters—will look like geniuses, signing their next Nelson Cruz.