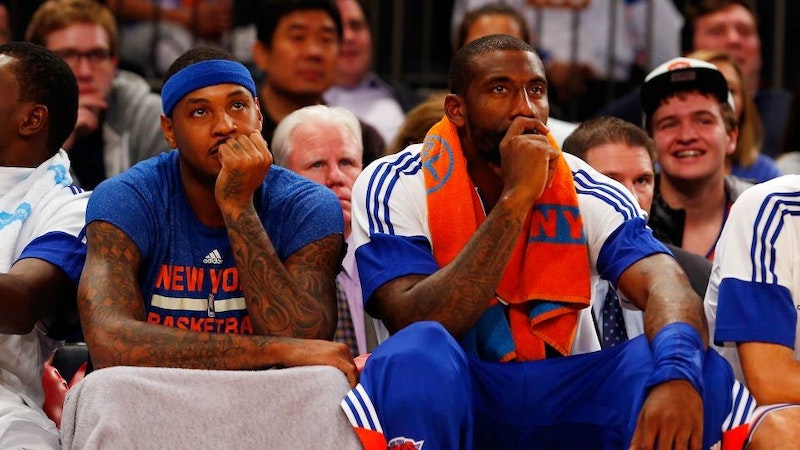 The lowly New York Knicks NBA franchise has achieved very little this season except racking up frequent flyer mileage with this week’s trip across the Atlantic to play the Milwaukee Bucks in a regular season game in London. The NBA’s “global games” have gone well in the past, selling out the O2 Arena, and for the Knicks, this is their second appearance in England. Some might remember 2013 when they faced the Detroit Pistons in the same venue. Oddly enough, the Knicks won that game 102-87 so they are undefeated on the banks of the river Thames. If poetic justice was to be served along with the South London beans on toast, the Knicks, with their deplorable 5-35 record, would not be facing an NBA foe but instead clash with the cellar-dwellers of the British Basketball League—either Leeds Force (4-16) or maybe Surrey United (4-15).

With all media eyes on LeBron James’ bowel movements in Cleveland, there has been very little buzz about the global game. Leading up to the game, the NBA’s website posted some ham-handed videos of the Milwaukee Bucks standing in front of Buckingham Palace carrying selfie sticks. There was another clip following the Bucks as they shuffled through Chelsea Football Club’s locker room at Stamford Bridge, admiring the blue jerseys of the top team in the Premier League soccer empire. Bucks forward John Henson declared the Chelsea ground “pretty dope.” So the Thursday night Knickerbockers-Bucks main event at the O2 will no doubt be packed with chavs and wags and the usual “stuck in London for the winter” Gordon Ramsey crowd.

With the college football championship game and the NFL’s head coach carousel in full whirl as the Super Bowl entrants are declared this weekend, the NBA doesn’t quite grab the spotlight. This traveling Medicine Show of “American sport” is growing old as both the NFL and NBA seem to think an expansion team in the United Kingdom is a good idea. If there could be a Liam Neeson player/coach tie-in of some kind, I’d agree that Belfast or Cardiff or Brighton should be awarded franchises immediately. Otherwise, fans are still trying to figure out the name of the team in Charlotte and why the Houston Oilers moved to Nashville.

Ultimately, this “global game” will assure that several thousand English folk will never want to see NBA basketball again. Ever. If there were obscenity trials for bad basketball, the Knicks would indeed be rushed to Reading to sit and rot in the same prison where Oscar Wilde served his time for gross indecency charges.

In the meantime, I have prepared a basic loser’s itinerary for the New York Knicks while the world’s worst pro basketball team is in London:

Have a team meeting at the Tiroler Hut. This Austrian joint in a basement on Bayswater’s Westbourne Grove makes everyone feel tall as the ceiling can’t be more than six feet high. Cowbell players, accordionists and Germanic geezers slouch in dark alcoves and suddenly emerge with all manner of giant beer mugs, lederhosen and plates full of kraut. Neck injuries will abound, giving many of New York’s players an excuse to sit this one out.

Shoot selfies on Pudding Lane, where the Great Fire of London began. Just seven miles east of the O2 Arena and across the river is the lane where in 1666 a bakery fire would go on to ravage almost 14,000 homes and scores of churches. If there is any place more appropriate for the firestorm of failure that is the 2014-15 Knicks, I cannot think of it.

Tour the Slough office parks. Yes, the Knicks should see the setting for the legendary BBC comedy series The Office as it sits some 20 miles outside the city. Depressing post-industrial acreage is perfect for Carmelo Anthony’s mood swings, and if the poet John Betjeman (“come friendly bombs and fall on Slough, it is not fit for humans now”) was around today, he would certainly use his pen to demand a similar fate for Spike Lee’s favorite ballers.

Party with Eddie the Eagle. If Phil Jackson and his basketball Zen are worth anything at all, he can hook up his pathetic team with underwhelming but hugely famous British ski jumper Michael “Eddie the Eagle” Edwards. He came in dead last but with panache at the 1988 Winter Olympics in Calgary. A former plasterer with Coke bottle spectacles who barely had money for equipment, the Eagle exemplified the British penchant for spectacular losing in athletics. His jumps were plummets, and his landings always botched. Phil should bring Eddie in from his South Cotswolds village and put him up in the team hotel in London and let the Eagle give the pep talk before the Knicks take the floor.

Have a drunken tree-top walkway cage match in Kew Gardens. The Knicks could reduce their roster by visiting the vertigo-inducing Treetop Walkway in Kew Gardens with several cases of Michelob Ultra. After drinking all the beer, the starters climb up and run along the oval-type boardwalk standing 60 feet off the ground weaving in and out of giant chestnut and oak trees. No weapons allowed, just sheer hand-to-hand brawn and brawl with no refs, but plenty of blood and fouls. This post-game nighttime exercise should prepare the Knicks for a miracle restoration and comeback for the second half of their delightfully horrid season.