There’s little reason for the QB to stay at Ohio State. 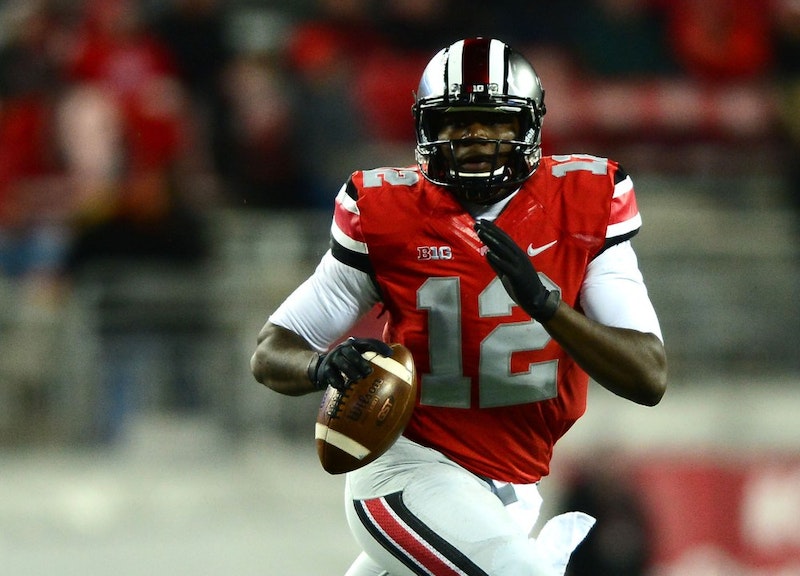 Ohio State quarterback Cardale Jones announced Thursday afternoon that he’d return to college for his junior season. After Jones’ surprising ascension from third-stringer to National Champ, it was speculated that the red-shirt sophomore would declare for the NFL draft. Despite some draft experts suggesting that Jones could be selected as high as the second or third round, with just three college starts to his name, the Buckeye signal-caller expressed his preference to complete his coursework and graduate. Jones’ choice may be noble, and even refreshing, but it’s also shortsighted.

Jones was ridiculed repeatedly over the past few weeks for a two-year old tweet in which he openly complained about football players having to actually attend class to maintain eligibility. Jones quipped that he wasn’t at Ohio State to “play school.” Now, Jones is suddenly deeply concerned about academics. I don’t mean to downplay the importance of education, but the notion that Jones can only get his degree during a specified four-year period in Columbus, Ohio is silly. There’s no reason that Jones couldn’t declare for the draft and then continue his coursework.

Jones’ return to the Buckeyes means that he’ll likely compete in a three-man quarterback challenge during the spring. Jones does have the National Championship trophy to hang his hat on, but fellow QBs Braxton Miller and J.T. Barrett are stiff competition, so much so that Jones couldn’t beat either of them out for the starting job in 2014. Miller is a two-time Big Ten Player of the Year and Barrett was a Heisman Trophy candidate before suffering a season-ending ankle injury versus Michigan.

In returning to school Jones will not only bypass potential NFL riches, he’ll also miss out on profiting from his new stardom. As a college athlete under the thumb of the NCAA, Jones is forbidden from receiving any cash, endorsing products, or otherwise marketing himself. I’m not in favor of paying student athletes, but I do think they should have the right to profit from the use of their likeness, sign autographs for payment, and endorse products and services. Jones is the second most famous man north of the Ohio River, but that fame may be fleeting. He could be back running Urban Meyer’s third-team offense by April, with nary a nickel to show for it. Had Jones declared for the draft he could’ve been cutting commercial spots for Columbus area Dodge dealers by the weekend.

Jones probably isn’t ready to start in the NFL, but who cares? Less than two months ago he wasn’t good enough to start for Ohio State. Jones’ gamble could pay off. Maybe he beats out Miller and Barrett in spring practice and leads to Buckeyes back to the playoff next year. A full season of on-field success could propel Jones to the top of next year’s draft board. Of course, given the lack of NFL success for Urban Meyer’s QB pupils, another year in Columbus may actually hinder Jones’ long-term prospects.

Meyer is an incredibly successful and respected college football coach, but his system is designed to win games, not groom pro style quarterbacks. Alex Smith played for Meyer at Utah and, though Smith is now a solid starter, it took him six seasons to finally establish himself. Tim Tebow famously flamed out after just three NFL seasons. Braxton Miller and Barrett have expertly run Meyer’s system, but neither is considered to have a NFL future. It’s possible that additional playing time may actually hurt Jones’ draft stock.