Sympathy for the Oilers

They're not a good hockey team. 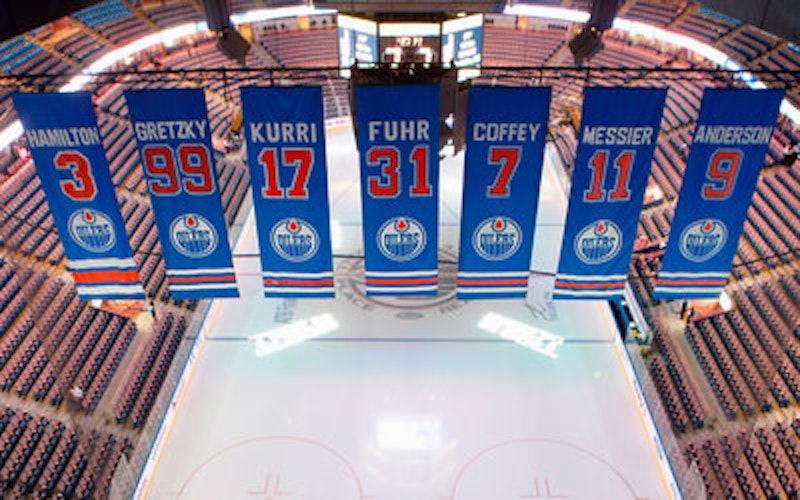 The other day a hockey team broke my heart. That happens from time to time. The odd thing was that in this case it was a team I wasn’t particularly cheering for.

I’m a Montrealer, born and raised, and was brought up on stories of Montreal Canadiens greats, of Jean Beliveau and Maurice Richard and Howie Morenz; as a child I watched Guy Lafleur and Larry Robinson, and then, a little older, cheered for Patrick Roy. For as long as I can remember I’ve been a Canadiens fan. Yet the same upbringing somehow failed to reach my younger brother. Due, no doubt, to some un-Canadian streak of rebelliousness, he grew up a fan of the Edmonton Oilers.

He’s always denied being influenced by the great Edmonton teams of the 1980s, saying that the only Edmonton championship he can remember was 1990, after the team had traded away Wayne Gretzky. We do have family out in the soi-disant City of Champions, so that might be a factor. At any rate, for whatever reason, he’s an Oiler diehard. And some sense of family sympathy has led me to keep an eye on the Oilers as well, if only out of concern for his mental health.

The Oilers are not a good hockey team, and haven’t been for years, ever since a team that made it to game seven of the 2006 Stanley Cup finals was broken up. The Oilers, beset by management teams of sublime self-confidence and minimal ability, have ended up at or near the bottom of the league standings for years. They’ve picked up exciting young players at the entry draft as a result—essentially, really bad hockey teams get first crack at picking prospects. The Oilers (with a bit of luck in the lottery that determined top spot at the draft) at one point picked first three years running. The talent they grabbed makes for some exciting hockey viewing, but the team’s been unable to surround those budding stars with the experienced players necessary to win games. Which, to me, makes the Oilers somehow unthreatening, no real competition for the team I actually care about. Following them is a low-stress way for a fan in the east to keep up with the NHL’s Western Conference.

In fact, following the Oilers actually relieves any stress I might have over the Canadiens: a kind of schadenfreude, a there-but-for-the-grace-of-God-goes-my-team mixture of humility and relief. I may disagree with tactical or line-up choices Montreal’s coaching staff makes, but at least the organization doesn’t invite players to training camp who they later find out they can’t actually sign (as the Oilers did earlier this year) or insist that winning cup rings as a player translates to success in the front-office (as Kevin Lowe, former Oilers’ defenseman and current President of Hockey Operations, did in 2013 right after stating that the team had “two types of fans”—people who pay money for tickets, and everybody else). The Oilers’ struggles tend to put everything else in life, or in hockey, into perspective.

And: some excellent hockey writers follow the Oilers. Every team has their bloggers, but the so-called Oilogosphere is particularly smart. Many of the new metrics adopted by the hockey world, the “advanced stats” like Corsi and PDO, came from Oilers fans trying to quantify just how bad their team was. I particularly like following the Lowetide blog, the product of radio host Allan Mitchell: Mitchell’s an optimistic writer, always looking on the bright side and trying to find good things to say without being foolishly upbeat. He uses both traditional and advanced stats sensibly, and as a stylist has a great sense of regional color. Reading his blog is fascinating because one witnesses a warm, humanistic writer whose subject is a hockey team with management apparently more interested in staging some sort of sub-Beckett theater of the absurd rather than icing a winner. (But then, Mitchell’s admitted that he has a soft spot for the Boston Bruins; so one could argue he deserves everything he gets.)

Still, while I feel well-disposed toward the Oilers, I’d never have thought they’d leave me heartbroken. A few weeks ago I tuned in to the late game on Hockey Night in Canada, featuring the Oilers in battle against their provincial rivals, the Calgary Flames. The Oilers and Flames are longstanding enemies; teams whose games against each other always seem to have a bit of extra spice. They’re not Yankees/Red Sox (that’d be Canadiens/Bruins, or perhaps Canadiens/Maple Leafs), but close; the rivalry comes from geography, frequent divisional play, and some bitter playoff matchups. So I was expecting the pleasant sensation of watching high-level, intense hockey with a minor rooting interest, but not enough to cause any real stress over the outcome. That’s what I got, for about half a period.

Then, with the puck in the Oilers’ zone, the puck was deflected on net. Goaltender Victor Fasth stopped it, but lost track of the rebound. He looked one way, the puck went the other, and Flames forward Joe Colbourne knocked it in for a 1-0 lead.

Unfortunate, and you’d rather your goaltender had a better sense of the puck. Still early in the game, I thought. Lots of time for things to change. Right?

The teams faced off at center ice, and a bit more than a minute later the Oilers had possession in their zone. Defenseman passed to defenseman, up to an Edmonton forward, and the forward sent the puck across the center of the ice to another forward. Who was not expecting the pass? The puck deflected from his stick back in front of the net. Where Flames star rookie Johnny Gaudreau, nicknamed “Johnny Hockey,” was waiting. A quick move by Gaudreau and the puck was past Fasth. 2-0.

Off the ensuing faceoff the puck went back into the Flames’ zone. The Oilers pressed, sending forwards deep, their defense moving up in the neutral zone. But the Flames defense recovered the puck and sent a long pass up to their forwards—who’d slipped behind the Oilers. Gaudreau got the puck and led a rare two-on-zero break against Fasth. Gaudreau made a move. Too fancy; he lost possession of the puck.

It went in anyway.

Fasth had followed Gaudreau’s move and lost track of the puck. Which kept going due to momentum, sliding right between his pads. Sixteen seconds had passed from the last goal. In 100 seconds of play, a scoreless game had turned into a three-goal Edmonton deficit.

That quickly, the game had gone from a tight contest to almost out of reach (it would end 4-1 Flames). I was stunned. There was something beyond brutal to the sudden collapse. It was horrific and dispiriting. To lose like that, in such a brief but intense comedy of errors, was something I couldn’t remember seeing, not from two NHL-caliber teams. It was heartbreaking to watch—even though I’m not an Oilers fan. Even though I was watching merely with mild curiosity.

Maybe even more heartbreaking: the Oilers just went on. For that game, and the next day. This was business as usual. Giveaways happened. Goals against happened. Losses happened. How, I wondered, do Oilers fans bear it? How do the players bear it?

Maybe not well. Victor Fasth has been known to shout at his teammates on the bench after being pulled. Quotes with a bitter edge have come out of the Oilers dressing room after losses. I knew these things; I didn’t really understand them, didn’t have a sense of the emotions that gave rise to them. Now, after watching three straight goals, each worse than the one before, I know a little bit more.

As for the Oilers franchise, they’ve continued to try things. Having already fired one head coach, they turned over official control of their bench to a former minor-league coach. They used waivers to pluck forward Matt Fraser out of the cesspool in Boston, then traded young depth center Marc Arcobello to Nashville for veteran depth center Derek Roy. On December 30 they played defending Stanley Cup champions Los Angeles, took a 2-0 lead into the third, lost the lead, then won the game in a shootout. They’ve begun to win a bit more since, just enough to move them out of the League basement, just enough that they likely won’t be bad enough to be able to pick one of the two top talents at the next draft.

But I’ll be haunted for a little while by that heartbreaking moment of sudden, sharp, existential despair. I think I’ll remember that sudden feeling of unexpected sympathy, the realization of a sort of common humanity. No team deserves to humiliate itself like that against its most hated rival. Except, of course, the Boston Bruins.