Neither Sinners Nor Saints

The people up in arms about the Saints bounty scandal are either disingenuous or stupid. 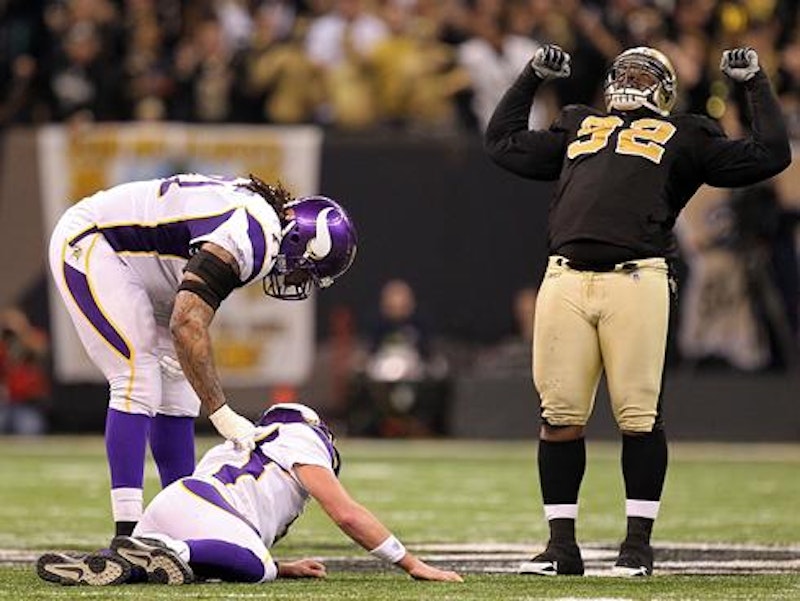 When I first saw the stories of the New Orleans Saints bounty program creep across my Twitter timeline I shrugged my shoulders and moved on to actual news.  I filed the bounty story under “Duh.” I spoke to a couple of friends who had pretty much the same reaction. Then I watched the talking heads scramble and scratch for the moral high ground. Over the past few days I’ve read, and heard, some national football writers and commentators who have suggested that former Saints defensive coordinator Gregg Williams should be banned from the league. A couple of people, obviously looking to stand out from the pitchfork wielding crowd, have suggested that Williams should go to jail for installing a bounty program in New Orleans. Let’s reserve some space in our prisons for people who have actually committed crimes, and spare me the righteous indignation.

Who the hell does the NFL think they’re kidding? Seriously. Why is it suddenly newsworthy that NFL players, who are paid handsomely by NFL teams to viciously hit one another on the gridiron, are rewarding each other with cash bonuses for those same vicious hits? Next thing I’ll hear is people up in arms that sometimes baseball pitchers intentionally hit batters. No way! That would be criminal.

A main source of contention is stemming from Saints linebacker Jonathan Vilma supposedly offering $10,000 to any teammate who could knock Brett Favre out of the 2010 NFC title game. The critics forget that the Saints were already paying the same players to knock Favre out of the game, and paying them a lot more than 10 grand. That’s the job of the defense. Hit the quarterback, and the running backs and receivers, so that they either have to leave the game or think twice about trying to make a play. If a player hits an opponent illegally, as defined by the league, then he’ll be fined. The fines for illegal hits are in excess of $10,000. Does anyone with a functioning adult brain really think that Vilma’s $10,000 “bounty” was going to motivate a teammate to put an illegal hit on an opponent and incur a penalty five or six times the size of that bounty?

I’ve heard some people suggesting that a bounty program is a way for teams to circumvent the salary cap. I guess in the literal sense it could be a violation, but who cares? According to reports the bounties typically ranged from $500 to $1500. Again, does anyone really think a player would sign a lesser free agent deal with the Saints because he could make $500 for a particularly impressive special teams tackle?

Scores of former players have taken to the airwaves over the past few days to defend Williams and the Saints in a sort of “there but for the grace of God go I” kind of way. Mike Golic, who typically plays the loveable meathead on ESPN Radio’s “Mike and Mike in the Morning,” has repeatedly voiced his displeasure with the media, including his co-workers, for its coverage of this story. What should have been filed under “no story” is now the scandal du jour.

The people who are railing against the Saints and Williams are either disingenuous or stupid. If they’re disingenuous for the sake of fanning the flames of controversy then shame on them. If they’re just plain stupid and naïve then shame on the networks that employ them and the viewing public who gives credence to their opinions. I’m not saying that every team has a bounty program, but we shouldn’t be shocked if that’s the case. It’s been said that no one wants to see how laws or sausage are made.

Maybe we should lump the NFL into that group. NFL players routinely refer to themselves as warriors and gladiators. It is hypocritical to expect them to be gentlemen on the field of play. If you don’t like what the NFL really is then perhaps you should watch golf or bowling.

NFL Commissioner Roger Goodell ought to tread lightly in dealing with the Saints. I have no doubt that Gregg Williams will be the fall guy for this mess. He should be punished because he continued the bounty program after the league asked him to stop, and any action punishment should be focused on his disobedience of the Commissioner’s request and worded as such. If Goodell throws the book at New Orleans, Williams, and Saints coach Sean Payton for the bounty program he better be willing to do it 31 more times.