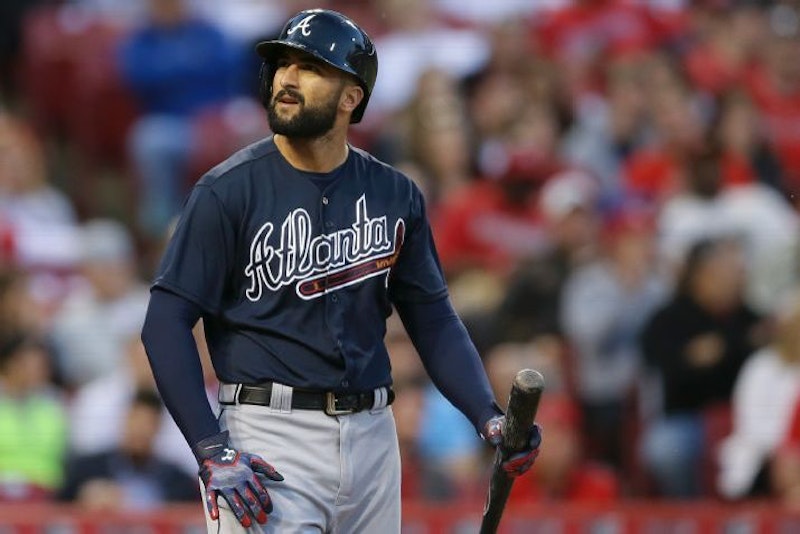 Caught Without a Belt: Brandon Belt has been thrown out in all four of his stolen base attempts. Coming into this year, Belt was 32 of 45 in lifetime steals.

Flipside to the Story: Trevor Story is on pace to strike out 240 times in 653 at-bats, but most fans are focused on his 11 HRs, only four of which were hit after April 10th.

Zobrist of Plate Discipline: Ben Zobrist has nearly double the amount of walks (23) as strikeouts (13).

Upton, Sit Down-ton: Justin Upton, whose career in Arizona and Atlanta has not prepared him for the frigid Detroit April weather, has 47 strikeouts in 119 at-bats, to go with his .235 batting average and two homers.

Mean Kershaw: Clayton Kershaw has struck out 64 batters and walked only three.

Price is Wrong, But Steven is Right: David Price's 6.75 ERA is not comforting to Red Sox fans, while Rick Porcello's 2.95 ERA is a relief and Steven Wright's 1.52 ERA is downright bewildering. Yes it’s early, but there are no rational explanations for these numbers, just the existentially unpredictable nature of a batted baseball.

Pelting Pelfrey: Mike Pelfrey's existence continues to befuddle me. Despite rarely striking a batter out, and giving up well over a hit per inning in every year since 2010, the 32 year-old Pelfrey continues to get major league starts. Now with Detroit, Pelfrey's 6.23 ERA and 1.95 WHIP in 30 innings signal that the end of a lackluster career is near.

Pardon Me: Meanwhile, 23-year-old Padre Luis "Pardon Me" Perdomo has surrendered 24 hits while managing to collect only 32 outs during his debut season.

Shelby Shelled: In addition to Zack Greinke, Arizona's other off-season prize was Shelby Miller, who was acquired in exchange for top pick Dansby Swanson, prospect Aaron Blair, and outfielder Ender Inciarte. Setting aside the fact that Dansby Swanson sounds like the name of a Beverly Hills pool boy, Miller has gotten off to what can only be considered a brutal debut in the desert. In seven starts, Shelby has allowed 52 base runners in 29 and 2/3 innings. D-backs fans have been treated to six opposing team homers in only 19 Miller innings at the home park.

Single Layer Markakis: Nick Markakis has 20 RBIs, thanks to 32 hits, none of which are triples or home runs.

Cold-Lanta Braves: Meanwhile, Braves fans have to be ecstatic about Markakis' 20 runs batted in, because they represent more than one-fifth of the Brave’s run production on the young season. Through 30 games, the Braves offense is looking like a 19th-century bunch, walloping all of seven home runs, slugging a mere .288. That team-wide .582 OPS is the main reason the Braves are currently on pace to lose 124 games.

Lonnie Chisen-Fall: Lonnie Chisenhall had quite the game on a warm Texas evening in June, 2014. Three homers and nine runs batted in, with a double on top. I was so impressed, I wrote about him on this site. The then-25-year-old Chisenhall ended the first-half of 2014 with a .332/.396/.519 line. After the All-Star Break, Chisenhall hit a puny .218/.277/.315 over the last three months of the season. Since June of 2014, Chisenhall has had one month of MLB success (August 2015). Unable to hit even mediocre southpaws, Chisenhall is now at best a platoon-option who has some power against righties. How his brief star has Chisen-fallen. Such are the perils of attempting to hit a small leather projectile thrown 95 miles per hour, by any other pitcher than Mike Pelfrey, Luis Perdomo or the April 2016 version of Shelby Miller.