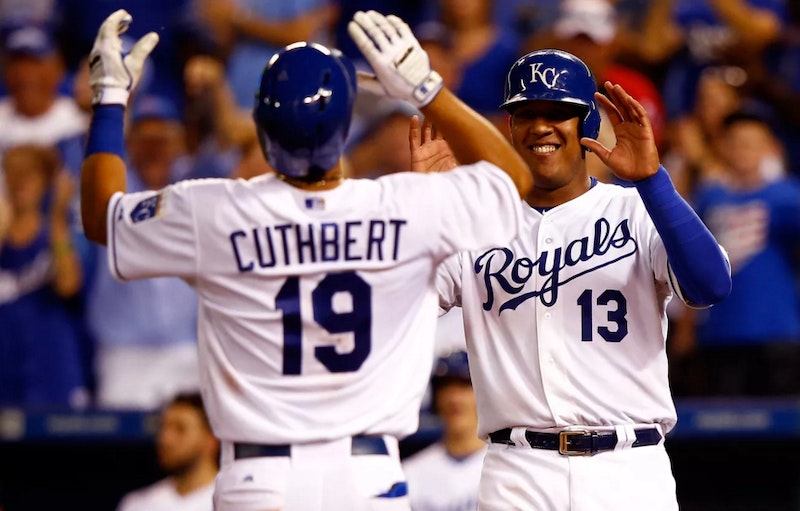 I was drawn to the Royals game against the Yankees last week as KC’s center fielder Lorenzo Cain slugged three home runs. The Yankees were leading, no small miracle these days, despite Cain’s effort. A glance at the KC lineup revealed that Cain’s big day wasn’t the most interesting thing about the Royals. Who the heck was Cheslor Cuthbert?

He’s the current third baseman for the defending World Series champs, but Cuthbert might have the best name in baseball. The Nicaraguan-born infielder has a name that evokes medieval royalty or an All-American lacrosse player. Instead of tormenting his feudal subjects or driving his dad’s BMW to a Baltimore area private school, Cheslor Cuthbert is filling in admirably for the injured Mike Moustakas. The 23-year-old Cuthbert actually played in 19 games for the Royals last season but somehow escaped my attention.

Cuthbert’s tenuous hold on MLB’s best name could soon be overtaken by Braves’ shortstop prospect Dansby Swanson. The Diamondbacks selected Swanson with the top pick in the 2015 draft and then flipped him to Atlanta in an offseason trade for Shelby Miller. Swanson, who sounds like he should be Cuthbert’s roommate at Johns Hopkins, is tearing it up in the Braves’ farm system. The 22-year-old was promoted to Double-A Mississippi after a three-week stay at Single-A. Swanson has a .906 OPS in 59 career games, making him a rare bright spot for the tanking Braves. He’ll likely be in Atlanta before the end of the season.

As an Orioles fan, and nerd, I sometimes peruse minor league stats to see how prospects like Chance Sisco, Trey Mancini, Chris Lee and David Hess are faring. I stumbled upon the name Christian Turnipseed on the Delmarva Shorebirds roster. Was this a root vegetable blessed by the Pope or an O’s prospect? Turnipseed was selected by the Orioles in the 28th round of the 2015 MLB draft. The right-hander went on to post 28 ⅓ scoreless innings to begin his professional career. Turnipseed was un-scored upon in his first 25 pro outings before a three-run hiccup in late April. He’s posted another five scoreless outings since then lowering his career ERA to 0.62 with a 0.73 WHIP.

Bijan Rademacher has a name that makes him stand out among the Chicago Cubs’ bunch of young hitting prospects. While he’s never been considered on par with the likes of fellow farmhands Albert Almora, Dan Vogelbach and Billy McKinney, the former 13th round draft pick is posting big numbers for the Tennessee Smokies. Rademacher has a .462 OBP and .981 OPS in his second season at Double-A. He’s a good candidate for a midseason trade if Chicago looks to deal minor league depth to bolster the big league roster.

Spencer Kieboom has a name befitting a demolitions expert or a longball maven. Unfortunately he’s neither. The outfielder for the Harrisburg Senators has thus far failed to live up to the promise of his surname. The former fifth round pick out of Clemson has slugged just 12 home runs in four professional seasons. Kieboom has a single long ball this season for the Senators.

Those are just a few of my favorite baseball names. For now, former Cardinals’ minor leaguer Stubby Clapp remains unsurpassed in the name game.