The book is now complete on a terrible 2012 trade. 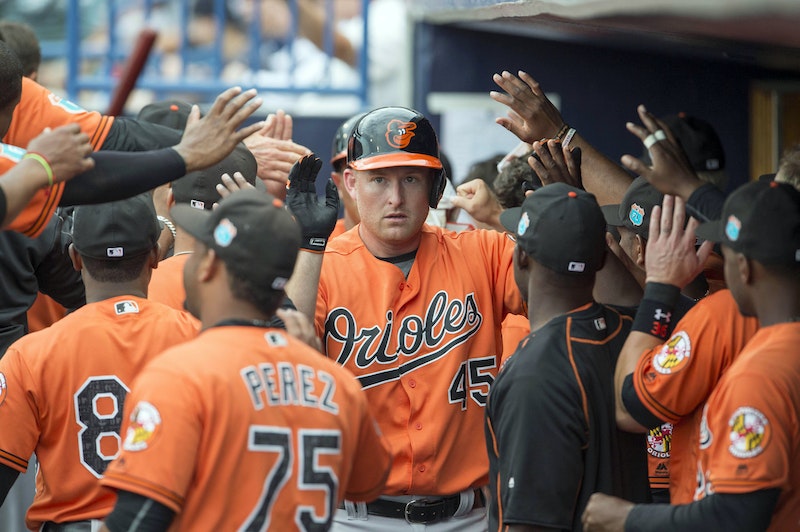 The Orioles’ trade for Mark Trumbo last December didn’t make many headlines. The Mariners dumped an overpaid designated hitter while the Orioles took on Trumbo’s $9 million salary as a bit of lineup insurance. The O’s dealt part-time catcher Steve Clevenger for the option to slot Trumbo in at DH or first base should Chris Davis skip town as a free agent.

Trumbo’s Baltimore’s second-best offensive player over the first six weeks of the 2016 season. He leads the club with 12 home runs and has provided lineup protection for Davis and Adam Jones. Trumbo’s also spent most of his playing time in right field where he’s not a complete disaster.

Trumbo’s recent output has been a welcome sight for O’s fans after suffering through the Travis Snider/Steve Pearce/David Lough quagmire in right field last season. Trumbo’s unlikely to continue posting a .929 OPS (his career high was .808 in 2012) but he’s already provided enough production and memorable moments (a two-homer inning in April) to make the loss of Clevenger more than worthwhile. He’s a free agent after the season and his adequate play in the outfield could make him an attractive bat in a weak field.

Clevenger is struggling to find a role, or hits, with Seattle. He’s appeared in just 10 games and is hitting .188. The Pigtown native may not be gaining many fans in Seattle but he does hold an interesting distinction in Orioles’ history. Clevenger was acquired, along with Scott Feldman, in the 2012 trade that sent Jake Arrieta and Pedro Strop to the Cubs. Since the trade Clevenger has existed on the periphery of the Big Leagues, Feldman’s a league average pitcher for the Astros, Strop’s a solid reliever in Chicago and Arrieta has morphed into a bearded, pilates evangelist, who happens to be the best pitcher in baseball.

Some fans have blamed former pitching coach Rick Adair for failing to teach Arrieta. Others have blamed Dan Duquette and Buck Showalter for giving up on Arrieta too soon. The truth is Arrieta is a grown man and he deserves all the blame for his struggles in Baltimore and the praise for his prowess in Chicago. Arrieta’s more mature and confident now than he ever was in Baltimore. The Orioles screwed up on Arrieta just like the Rangers screwed up on Chris Davis and the Mariners screwed up on Adam Jones. It happens. Clevenger’s trade to Seattle closed the lid on the last vestige of Arrieta’s trade to the Cubs and Trumbo’s hot start is providing a bit of relief to the O’s.