Little League in the Majors

No gum in the dugout. 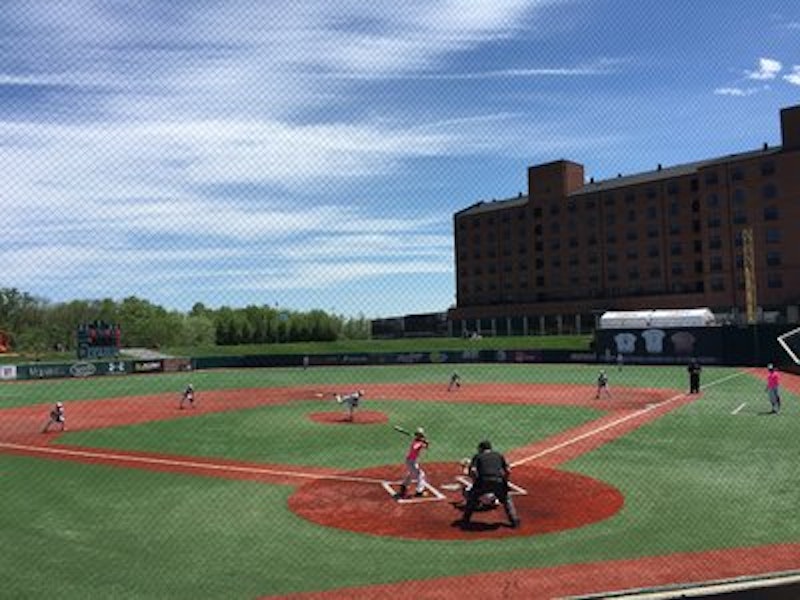 After six happy years keeping score at my son’s rec baseball games, I now find myself gripping the scorebook at travel baseball tournaments. I’ve already survived getting called out by a disgruntled local mom pointing out that I’d made my feelings clear on travel ball last year and now allowed my son to play. This year, he was asked to try out and himself asked to do so we agreed. Big difference at age 10 than paying a bunch of money to put him in expensive equipment and overnight hotels back when he was five, so back off, honey.

I was thrilled and terrified when asked to keep score of the travel team. Yes, I have lots of experience. I kept score for my brothers’ teams from the time I was a kid, spent three years in high school as the varsity team baseball manager keeping score for all their games, traveling in uniform with the team, making the other guys’ girlfriends jealous like it was my job, but mainly being a statistician. I just love baseball. But travel baseball in modern times? A horse of a different color. These days, there are two scorekeepers; me, the official scorekeeper on the book, and the guy who does “the app” called Game Changer, so all the parents can follow along on their devices from work, or the bleachers, or wherever they are.

I’m not against this use of modern technology, but what frightened me is the potential for emphasis on the stats. How much do travel parents care about whether a ball in play is scored a base hit or an error? I lived in fear. The hard-hit grounder. I was now responsible for ruling whether the shortstop bobbled it/didn’t bobble it and now their little Graham’s-Been-Traveling-Since-He-Was-Three gets a base on an error versus a single? And mommy and daddy can see results blip across their iPhone screens from the stands and they’re going to come knocking at the dugout to have a chat with me about Graham’s batting average being affected by my subjective call on the almost-imperceptible, possibly non-existent bobble of a 10-year old shortstop? Lordy. Back in rec, I scored everyone a base hit if they made it to first. But this is travel and the information has to be accurate so that good coaching decisions can be made.

Not to mention the pitch count. If there’s a dispute, and the cage-faced umpire starts looking around, all eyes go to that mom over there with the “official book” to settle it. Mortifying. The scariest thing that happened at the first tournament was at the end of the fifth inning. It was tied 5-5. The ump walked over to me, asking what the official tournament rule was on ties, what the mercy rule was, and also what the official game start time was. I blinked. Of course it made sense I was supposed to know the tournament rules, by heart. I was the official scorekeeper! Didn’t know them. The game was stopped, because the ump wasn’t behind the plate. It was raining. Everyone wanted to go home. I told him the start time (always write it down), said I needed a minute to check the tournament rule book, and, channeling Bill Murray in Caddyshack, smiled and said maybe we could try to get the last inning in (regulation is six) before the heavy stuff started. He agreed, said play ball, and we went on to lose, which of course is my fault for not knowing the game could’ve ended in a tie.

Next up was a tournament at Ripken Stadium, a palace of Little League baseball. It’s an exact scaled-down replica of Camden Yards. The "warehouse" building is a Courtyard Marriott so the boys can go swimming and hit the hot tub between tournament games and discuss whether they prefer lizard-skin grips on their $350 Mako versus Combat brand bats. Supersized “Protect this House” Under Armour and Big League Chew and other sponsor signs loom everywhere. Before each game, Cal Ripken’s voice comes across the loudspeakers and reminds everyone about sportsmanship, prompting a kid on my son’s team to ask if Ripken was inside the announcer’s box.

It was the first game in which I’ve ever kept score where there were electronic scoreboards, astroturf, and boys running around squealing (to the point of having to be reminded they were on deck) about how there was a working toilet in the dugout. There’s music playing, some of which had lyrics that kids maybe shouldn’t hear, but this is the big league-little leagues now, so leave your farm values back in the boonies, parents. There’s an announcer, who comes up to speak with me about pronunciation of the kids’ names and any nicknames they use. I can’t help it, so when I’m done reviewing the names, I make a move to take a piece of paper out from the back of my scorebook and look up at him and say, “I have the list of their walk-up songs here for you.” He looks at me for a second, narrowing his eyes a bit, he hasn’t heard that one before for 10-year olds, but anything’s believable in a full-miniature scale MLB stadium where kids are wearing probably a grand worth of gear apiece and you can drop $200 in the Under Armour gear souvenir shop without a blink.  I smile. “Just kidding.” He smiles back, “Nice one.”

I reminisce about the days when I was allowed to bring bubble gum to the dugout for the boys. Despite the sponsorship on the billboards, tournament rules (which I memorized this time) say no gum in the dugout. None of my imagined fears have really come true as a travel baseball mom. If there are Graham Mommies and Daddies out there I don’t see them because I’m right behind the plate, laser-focused on the pitching count. Besides, the guy who runs the app is the one who puts in base hits versus errors, and it may not even line up with what’s in the book, so for all I know he gives everyone a base hit while I’m stressing over whether the shortstop should’ve made the hard-hit grounder play. The only thing that makes that call tough is the fact that my son, when he’s not pitching, is the shortstop.