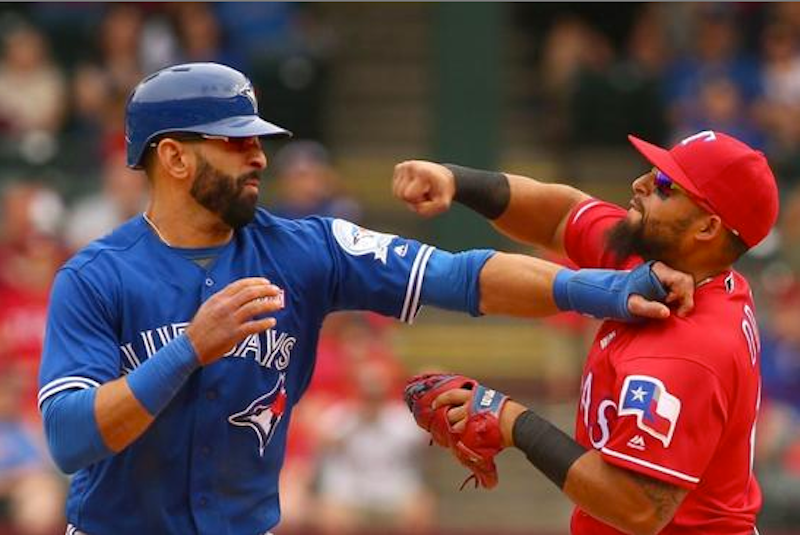 When Texas Ranger Rougned Odor landed a stunning right cross to the jaw of Toronto Blue Jays slugger Jose Bautista last Sunday, it ended a 10-year drought of lame MLB “brawls.” The previous real knuckles-to-jowls landed punch was May 20, 2006, when Cubs catcher Michael Barrett decked White Sox heel A.J. Pierzynski after a home plate play at U.S. Cellular Field during some Chicago-on-Chicago interleague crime. Since the clash of those catchers, nary a solid punch has been landed by any of the professionals wearing MLB uniforms. Almost all benchclearing incidents in the past several seasons have featured a lot of standing around and pointing and tugging of jerseys and posturing behind $400 customized Oakley sunglasses.

So it was cathartic, then, to see Bautista’s sunglasses and helmet ejected from his skull by the Venezuelan middle infielder with the GWAR-like moniker. Joey Bats, as Jose is called, was being repaid for his annoying and highly-publicized bat flip after his home run against Texas in the 2015 ALDS.

The string of events leading to Sunday’s middle-of-the-field haymaker fest also included Bautista getting nailed by a pitch from Texas reliever Matt Bush, the former prisoner and 2004 first-round draft pick who earned his first MLB win in this game. Bush was apparently unencumbered by his lengthy DUI/hit-and-run rap sheet and plunked Bautista square in the ribs with a 98 mph heater. After taking first base, Bautista went in very hard on Odor to break up a double play during which Odor may or may not have thrown the ball at the oncoming Bautista. With both teams wearing their solid color uniform tops—Texas in bright tomato red and Toronto in Maple Leaf blue—the skirmish took on a swirling board-game feeling when viewed from above. A classic clash of blues and reds, such as Liverpool and Everton in English soccer, or blue states vs. red states in American politics, or those Crips and Bloods in the other American politics. Odor’s teammate Adrian Beltre quickly got Bautista in a bear hug, limiting the Dominican slugger’s ability to obtain revenge. The red jerseys dominated for a few seconds until a sprinting Kevin Pillar and Josh Donaldson arrived on the scene at full speed from the Toronto dugout, slightly overrunning the action as Rougned sullied his textbook Ken Norton fist paydirt with a follow-up blow that was a rather bitchy glove slap.

When the benches had emptied the Technicolor scrum was located in the absolute center of the Roman Coliseum with bored umpires walking among the tussle as if seeking a water bottle or any relief from the Texas heat. Writer James Ellroy would call it a “sandpaper tango” but this was going down on the soft grass just beyond the dirt infield. With all of the player personnel standing in short center facing each other (including a previously ejected manager and coach), Pillar bit into his adrenalin pill and dashed through the virtual hotel lobby in search of Odor. Beltre and Bautista were still stuck together. Pillar couldn’t find Odor and almost mistakenly swung at Texas base coach Hector Ortiz. At this point the umps had their water and got both squads to simmer down. Until the bottom of the eighth, when Jesse Chavez threw the obligatory HBP at Prince Fielder’s gargantuan thigh. Chavez was tossed automatically, the benches emptied and there was more standing around as Beltre read a soliloquy of some kind in front of the assembled umpires.

As second base fights go, Odor vs. Bautista is right up there with the dusty Pete Rose vs. Bud Harrelson battle in the 1973 playoffs at Shea Stadium or perhaps even the extreme mismatch that was Pirates catcher and former football/wrestling letterman Ed Ott against diminutive Mets keystoner Felix Millan in 1977 at Three Rivers Stadium.

It’s no wonder that punches landed in Arlington, Texas, as some very famous blows were struck just a few yards away in the old Arlington Stadium back in August of 1993. That's when Rangers pitching legend Nolan Ryan welcomed a mound charge by a young Robin Ventura of the White Sox. One headlock and six blows to the head later, Ventura was dismissed, kicked out, and had to watch Ryan continue pitching the next three innings and earning the win for the Rangers. For many years to follow, a giant photo of Ryan’s hammerblows landing on Ventura’s scalp adorned the front office walls of the Texas Rangers Baseball Club.

The Bautista-Odor square-off was also the first major brawl of the social media era. The fight lit up the Internet and was officially “trending” for most of Sunday night. A “Don’t Mess With Texas” meme was circulating, showing Ryan’s headlock on top of Odor’s knuckle sandwich. Back pages bumped the NBA playoff snoozers with still shots of the punch worthy of Neil Leifer’s lens honed in on Muhammad Ali. ESPN on-air graphics got out the big fonts with phrases like “Anarchy in Arlington” listing the numerous ejections. Eduardo Perez, an ESPN baseball analyst and former ballplayer, had to remind his jock-sniffing comrades on the air that yes, big leaguers still play a “kids” game and this stuff is part of it; Tim Kurkjian reminded viewers that baseball players have very long memories regarding misdeeds of those who break the unwritten rules; hockey expert and NHL veteran Barry Melrose even checked in with a “why it is important to throw the first punch” feature.

Baseball, for a brief evening and following morning on talk radio, was back. Though Toronto and Texas don’t have any regular season games remaining against each other, one can only hope they meet again in the postseason and everyone from Joe Blogger to the worst MLB.com shill can use the “storyline” to redline the drama-and-hype meter one more time. Many pundits thought it was “bush” of Texas to wait until late in the final game against Toronto to go after Bautista. I thought it was smart, showing that Rangers manager Jeff Banister (unlike half the GMs in MLB) was not born yesterday.

As a footnote to Kurkjian’s comments, it’s highly probable the Cubs and Pirates will be squaring off in similar fashion as the calendar pages drop this season. Chicago seems to be targeting Pittsburgh third baseman Jung Ho Kang again, after super scrub Chris Coghlan used a dirty rollblock slide to shatter Kang’s knee last September, ending his season as the Pirates chased the Cardinals down the stretch. The Coghlan takeout of Kang makes the Chase Utley slide on Ruben Tejada look like a mere whiffle ball skirmish. In 2009 when he was with Florida, Coghlan used a similar filthy slide to crush Tampa Bay infielder Akinori Iwamura. His knee was never the same after suffering a torn ACL, and the incident essentially ended the Japanese player’s MLB career. Coghlan is now with Oakland and continues to work on becoming the present-day second coming of Kurt Bevacqua.