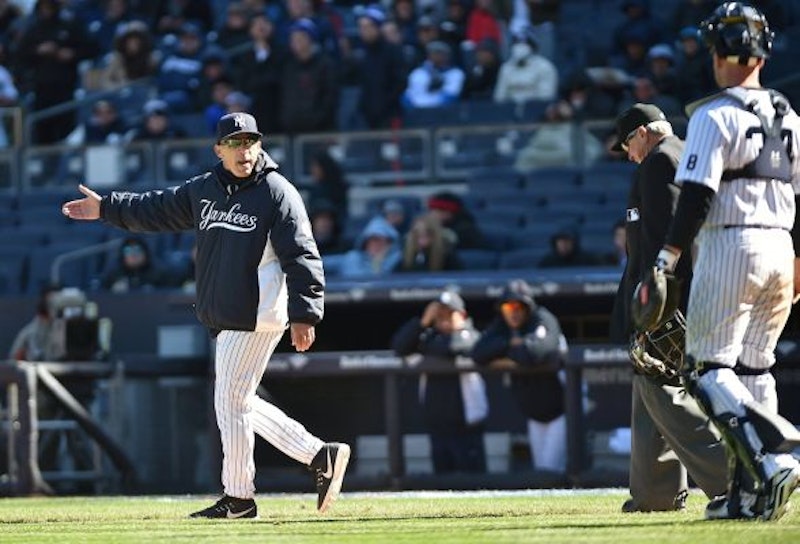 It’s taken more than two decades but those “Yankees Suck” chants that permeate throughout Major League Baseball finally have some teeth. For the first time since the early 1990s the Yankees really do suck. It’s a wonderful time to be a Yankees-hater. The team’s downfall has loomed on the horizon for several years but this is the season when all that patient waiting comes to fruition. The Bronx Bombers—at current writing—currently rank last in the American League with a run differential of minus 34, which ranks alongside the Astros and just behind the hapless Minnesota Twins. It’s a bad look for a franchise with countless championships and a payroll north of $200 million.

The Yankees are long on negatives with very little upside. They still owe C.C. Sabathia and Alex Rodriguez more than $20 million each for the next two seasons. Sabathia ceased being a useful pitcher in 2013. Rodriguez has been more of a headache than a lineup presence since 2011. The last time A-Rod led the league in anything other than embarrassing headlines was in 2008. He bounced back with 33 home runs last season but he looks his age. The 40-year-old is hitting .194 with 20 strikeouts in 72 at bats and is now sidelined with a hamstring injury.

The Yankees pinned their hopes this season on young pitching and a shutdown bullpen. The newly-acquired Aroldis Chapman has yet to pitch due to his suspension for domestic violence. At this point Chapman, a free agent after the season, probably serves the Yanks best as trade bait. The young starters (Luis Severino, Michael Pineda, and Nathan Eovaldi) have been a disaster. The trio all sport ERAs over 5.40 and have yielded 16 home runs in 15 starts. The Yankees’ starting rotation and weak offense have neutralized the impact of the team’s stellar bullpen.

Jacoby Ellsbury, one-time Red Sox wunderkind, now ranks alongside A-Rod and Sabathia as a payroll albatross. The Yankees paid Ellsbury like a future Hall of Famer when he hit free agency after the 2013 season. Ellsbury has regressed each season in New York. His MVP-caliber 2011 season in Boston looks like a complete aberration. Ellsbury’s now a below average offensive player, with slipping defensive abilities. The Yankees owe him $21 million per season through 2021.

The Yankees have been old and slow for several years but their deficiencies are finally showing up in the standings. The team’s ineffective starting pitching has exacerbated the problem. Say it loud and proud, Yankees Suck!