Who should start in Boston’s outfield? 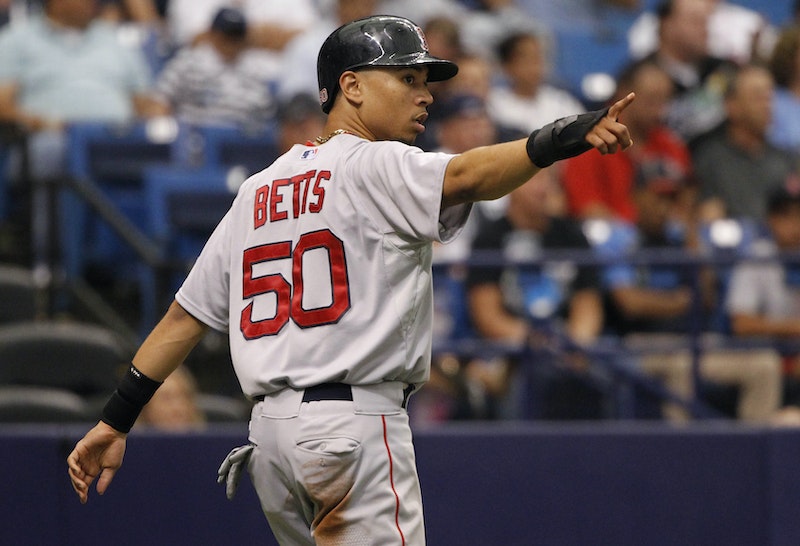 John Farrell thinks that no one should lose a job to injury. What about circumstance? Ability? Contract status? Age?

That last one would elicit yelps of inequality and ageism in just about any other industry, but it’s a legitimate question in professional sports. Mookie Betts (22) is much younger than Shane Victorino (34). He has less experience. He has a greater risk of performing poorly in 2015. He’s new to the outfield, and will likely make far more errors than his veteran teammate. These are all reasons why Betts should be starting in right field on opening day.

Betts need to assimilate to the majors eventually, so why delay his arrival any longer, especially when necessary time in AAA could hurt his future value (you never want to let prospects cook for too long). It certainly doesn’t seem like he needs more seasoning— his 1.9 fWAR, in only 213 plate appearances, shows that he’s ready for an everyday role. Or, at the very least, another extended audition. How could you justifiably keep one of the most exciting young players in baseball out of the lineup?

With Victorino, of course, the man who catalyzed the 2013 Red Sox but only made a cameo on the 2014 club. He’s currently coming off injury— a recurring motif in his career. At this point, he’s not the sparkplug that energized so many Philly fans during the last half of the 00’s. He’s wearier, older, wizened. He’s under contract for just one more season. After that, he’s off the books. These are all reasons why Victorino should be starting in right field opening day.

No one ever performs quite as well as players motivated by money. Victorino knows that this is his last chance to secure another lucrative contract. With a strong season, he could be looking at $50 million. That’s not as ridiculous as it sounds: when healthy, Victorino has never failed to perform. There’s no reason to believe he won’t be a 5.6 fWAR player in 2015.

The easiest solution—to play both of them—is not an option: the paychecks of both Hanley Ramirez and Rusney Castillo prohibit them from being benched. Besides, why would you even want to bench one of them?

Hence the dilemma. GM Ben Cherington could trade one of the two, but the potential loss in value makes that just as tricky. Trading Betts is almost unfathomable to me, and trading Victorino doesn’t make sense from a business standpoint. The Red Sox swallow a large chunk of his $13 million salary, getting little in return, only to see him succeed with a rival club?

So, final answer: Betts or Victorino? I can’t decide, and, clearly, neither can Cherington. This question won’t be resolved until the end of spring training, if then.