What would Clemente say about Jihadi John? 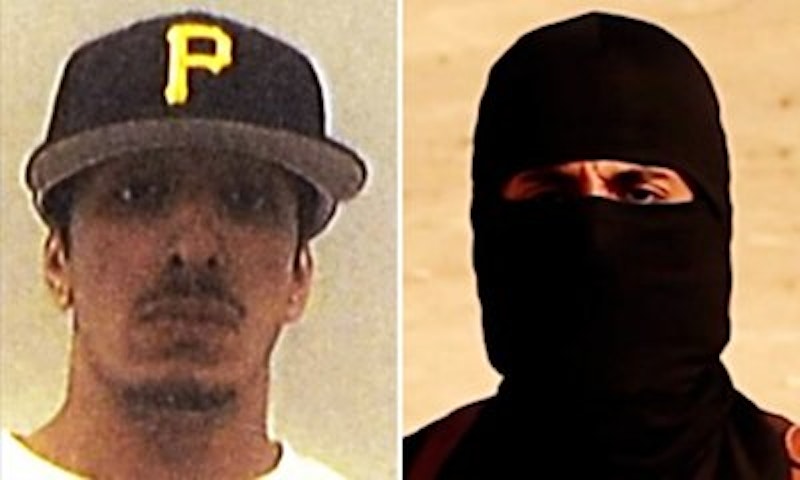 There was a nut who went wild on the Staten Island Ferry with a samurai sword and hacked up some people back in the summer of 1986. He was apprehended by an off-duty cop on board and a photo of him leaving the ferry in handcuffs showed him wearing a knock-off souvenir t-shirt that was the font and logo of New York magazine. Seeing that iconic logo in the bloodied context of random criminal violence always makes me curious about accidental publicity. I wondered if New York magazine released a statement of any kind distancing the publication from the sword-wielding homeless Cuban refugee. Probably not. They were too busy hyping the East Village art scene or reviewing Texarkana’s suckling pig entrée for the umpteenth time.

Last week the Pittsburgh Pirates released an official statement regarding a photograph of Mohammed Emwazi, aka “Jihadi John” who was shown “unmasked” wearing a fitted Pirates cap with his ears tucked under just like Bucco infielder Pedro Alvarez. The photo was first run by British TV outfit Sky News and is from Emwazi’s days as a student at the University of Westminster in London. The cap, similar to the one I’ve been wearing for most of my life, is slightly oversized on his head, and he did not crease the bill. It was, however, aligned perfectly straight so the Islamic militant decapitator was apparently not going for that “gangsta lean” type of look favored by Oil Can Boyd and invisible arrow-shooting closer Fernando Rodney. My in-laws in London saw the photo and, scratching their heads, reached for the phone to dial America. It was all I could do to read them this timely press release issued by the Pirates:

“The classic gold P stands for Pittsburgh and is worn by our players, coaches and fans with a great sense of pride,” the Pirates say. “It is absolutely sickening to everyone within the Pirates organization, and to our great fans, to see this murderer wearing a Pirates cap in this old photo.”

Seven years ago, the Pirates would have relished this type of international exposure. Now the sea-going franchise is back on solid ground with two straight playoff appearances and tons of preseason hype for the upcoming MLB campaign, which kind of scares me. They don’t need this type of unseemly attention. For the record, and as of this writing, I have no fewer than 19 Pirates caps in my house, some dating back to the Reagan administration. So with contention and sanity restored in Pittsburgh, the PR dudes on Federal St. had to nip this kind of thing in the bud, which I guess they did with this thankfully brief press release. (I also thank them for calling us “great” fans.)

Probably the most famous Pirates hat-wearer until this recent Kuwaiti-born blip is Chuck D of Public Enemy. The hat just looked right on him. He “defined the brand” for several summers, inadvertently moving lots of Bucco merchandise throughout the Barry Bonds era. One night Chuck D came into Sugar Reef, a restaurant where I worked in the East Village back in the late-1980s early-90s. He was attending a platinum record celebration for Tone Loc. It was a great party, and Chuck was circulating and chatting away. We were both wearing the same hat, so I finally got to ask him: “Are you a Pittsburgh Pirates fan?” “Naw,” he said. He wore the Bucco hat because the gold P stood out on the stark black background. “It is my shout out to the Black Panthers,” Chuck D said. In later interviews he would say he was a big fan of Roberto Clemente and the “P” stood for Public Enemy. He also told an interviewer MLB suits contacted him and told him not to wear the Bucco hat in any future Public Enemy videos.

The Pirates cap has also been widely popular among the Latin Kings gang on both coasts. The late-70s “pillbox” version was never worn with more class and aggression than by Suicidal Tendencies bass player Louiche Mayorga, which later inspired Italian designers to offer a “pillbox” American cap among their tight-fitting fare. The 1979 “We Are Fam-a-Lee” Pirates cap (worn by Mayorga) is either hated or loved; no one seems to be in the middle when it comes to that particular headwear.

In the overly-earnest 1991 Lawrence Kasdan film Grand Canyon, the Kevin Kline character says he’s a Pirates fan and even named his son Roberto, after Roberto Clemente. He also recounts how a woman wearing a Pirates hat (who might have been an angel!) saved his life by pulling him back to the curb as he absent-mindedly stepped in front of a speeding L.A. bus. Other baseball teams have had hat issues. The Cincinnati Reds and Los Angeles Dodgers have been fighting the Bloods and Crips wars for years now. The New York Times has written about the high number of Yankees caps worn by Gotham criminals who have the interlocking N and Y as part of their official NYPD descriptions.

And how many times has Handsome Dick Manitoba of the Dictators been spotted in his trademark Yankees knit cap? Almost as many times as Iggy Pop was seen wearing that same AC Milan soccer jersey the summer of his Zombie Birdhouse tour.

The most famous Yankees cap disgracer has to be the “Yankee bandit” Eddie Dodson, who robbed 64 banks in the late-80s and early-90s to support his drug habit and topped the FBI’s bank robber list. He got the nickname because he wore a Yankees cap during his heists. And he really was a Yankees fan (and Jack Nicholson’s gardener at one point). In the 2014 film Electric Slide, which is based on Dodson’s life story, he is instead depicted as a dapper criminal wearing a Panama hat instead of his traditional Yankees cap. Obviously the movie producers didn’t want to tangle with the rabid bulldogs strolling the offices of Major League Baseball Properties, probably the same people who tried to intimidate Chuck D years earlier when he and Flavor Flav had to tell them what time it was.

Thing is, MLB Properties is not in charge of the Yankees cap insignia and trademark logo licensing rights and all of that fine-print malarkey. We all know that responsibility is one of Jay Z’s 99 problems because, according to his “Empire State of Mind” song, he made the Yankees cap more popular than any Yankee can.