The new Cubs will have a touch of the Rays. 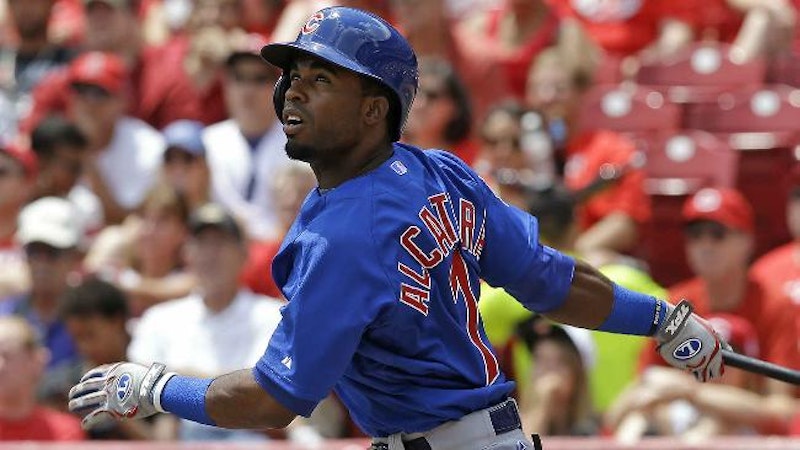 The hiring of Joe Maddon brought credibility to the Cubs’ rebuilding plan. It also has the potential for off-the-wall lineups, unconventional defensive alignments and head-scratching strategy. Madden’s mad scientist act is no doubt backed up with hard data not readily available to the fan in the stands.

During his time with the Tampa Bay Rays, Maddon used Ben Zobrist as a Swiss Army knife, deploying the versatile defender and efficient batter in every conceivable scenario. Zobrist may find a more permanent role at second base now that he’s in Oakland but his tenure at Tampa Bay was marked by his on base skills and ability to move around the diamond with remarkable ease. If Maddon is looking to duplicate Zobrist’s everyday role with the Cubs he may have a worthy candidate in Arismendy Alcantara.

Alcantara is frequently lost among Chicago’s other talented youngsters. While Kris Bryant and Addison Russell were mashing in the minors last season, Alcantara was getting his feet wet in the big leagues. After posting a .353 OBP for Triple-A Iowa, and earning starts at second base, shortstop, and center field, Alcantara showed flashes of promise for the Cubs. While his OBP dropped to just .254 in 70 Major League games the rookie slashed 23 extra base hits and showed off his range in the outfield.

The Cubs traded for Dexter Fowler several weeks ago, presumably to patrol center field and provide a veteran presence in the leadoff spot. The deal solidified the Chicago lineup but cast doubt on Alcantara’s 2015 destination. Chicago figures to give 2014 revelation Chris Coghlan a chance for regular playing time in left. Strikeout-prone masher Javy Baez and on-base machine Tommy LaStella will battle for second base playing time. Kris Bryant will take over every day third base duties by late April. The current state of the Chicago lineup puts Alcantara’s position in flux, and that may be just how Maddon wants it.

Alcantara has little to prove at Triple-A and is too talented to simply sit on the bench in the Majors. Given his extensive infield experience (including 51 games at 3B) in the minor leagues Alcantara could potentially start the season as the Cubs’ third baseman until the service time concerns surrounding Bryant’s arrival pass by late April. After yielding third base to Bryant the Cubs could choose to make Alcantara the new Zobrist and play him all over the field. Alcantara serves as insurance against a Coghlan regression, can back up at second and short, and gain some experience as Fowler’s understudy. Fowler is a free agent following the 2015 season and Alcantara figures to battle prospect Albert Almora for center field supremacy at Wrigley for the coming seasons. Joe Maddon started Ben Zobrist at five positions (2B, SS, LF, RF, CF) last season and may have the same plan in mind for the versatile and talented Alcantara.