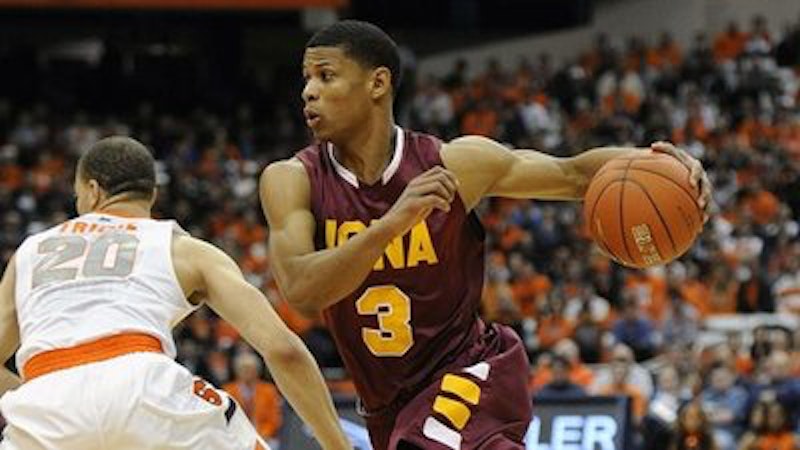 The Marist Red Foxes Division I NCAA men’s basketball squad had been my elusive prey all winter, especially during their 14-game losing streak which began Dec. 1 with a loss at Boston College and lasted until Marist beat the Fairfield Stags in Poughkeepsie on Jan. 25. That streak had made Marist a buffet for fellow Metro Atlantic Athletic Conference squads to pick over. Sure, they had a couple of key players out with injuries, but losing streaks of that length are worthy of forensic examination. I wanted to sit behind the bench and do a detailed piece about the culture and body language of losing. What’s it like to fail again and again? What does the coach look like when he squats in front of the bench down 12 points with a minute left, staring another defeat squarely in the eyes?

I have already written about Bard College basketball in this space, but that is Division III low-hanging (organic) fruit to be sure. Marist plays with the big boys and the MAAC winner gets a ticket to the March Madness waltz of dementia and henceforth at least an iota of national television exposure as a possible “Cinderella” team.

What kept me away from Marist was a shitload of bad weather, work and my daughter’s Friday night soccer practices. It all conspired to prevent my attendance at the McCann Arena in Poughkeepsie to chronicle a squad wallowing in low mediocrity. The Marist men’s team has for years lived in the shadow of the highly successful women’s squad that tends to energize the 6300-student campus along the banks of the Hudson River in north Poughkeepsie. Marist has been bobbing up and down on the pop culture map as the place where Bill O’Reilly may or may not have been the punter on the football team, depending on which moody Keith Olbermann rant you believe. The men’s basketball program hangs its flimsy hat on the legacy of Rik Smits, the Indiana Pacer and Marist alum known as the ever-lumbering “Dunkin Dutchman.” For many months patrons of  the Applebee’s across the avenue from Marist enjoyed a fantastic Smits Shrine, but mandatory corporate renovations to the property destroyed the original Smits exhibit and replaced it with generic local ephemera, according the manager of that particular Applebee’s franchise. She said she had no idea who ended up with all the cool Rik Smits stuff that was in the glass case.

The Marist victory over Fairfield actually sparked three more consecutive wins against conference foes, thus destroying my storyline of pathetic competitors forced to play out the string during a harsh winter of bus rides to Canisius with the Grim Reaper at the wheel during white-out conditions on the New York State Thruway.

So without the losing streak I was instead lured to Poughkeepsie by a point guard with NBA potential and pedigree. He is A.J. English of the Iona Golden Gaels, a six-foot-four junior from Delaware who is currently 22nd in the nation in scoring, averaging 19.5 points per game. NBA scouts have been snooping around the smallish gyms of the Northeast with their eyes on English. His dad was the A.J. English who made some noise with the NBA’s Washington Bullets back in the early 1990s before getting his passport stamped around various European leagues. Iona is set to win the MAAC, being 23-6 overall and 16-2 in the conference as of this writing. This portends a 12 or 13 seed in the tournament to be matched up with some big deal school like Ohio State, as they did in the 2013 March Madness. If Iona is to succeed in the bracket this March, many place their fate on the shoulders of English who carries a supercool persona certainly overqualified for the streets of New Rochelle.

Iona steered its bus through the snow and into Poughkeepsie on Friday, Feb. 20 with the national cable TV cameras of ESPNU broadcasting the hardwood tilt against Marist. The Golden Gaels transformed a sketchy first half performance into a 72-68 win over the Red Foxes during which English did not perspire. He methodically poured in 19 points including the free throws that sealed the win in the agony-filled final seconds. But after watching Iona from spitting distance in Poughkeepsie, it seems they have a collective hot head. The players ride the refs and shout and scream and whine. The coach gets pissed, there’s a scene in front of the bench, and despite down a few points at the half, the Gaels emerge for a businesslike second half and win again.

English and his shouting buddy David Laury III (currently 10th in the nation in scoring and equally scoutable by NBA wonks) conducted some post-game antics a few weeks earlier against Saint Peter’s that saw English get suspended for one game after brawling and shoving a ref. If Laury and English can maintain their tempers, Iona might surprise some people in the Big Dance. There also might be a work ethic issue with the Gaels as they were not exactly breaking shoelaces as they staggered through two halves of basketball inside McCann Arena, a 3200-seater that oddly has horizontal wood planking running up the side walls, giving it a warped basketball half-pipe type of feel. I couldn’t find any NBA scouts in the house, though I wouldn’t know one by sight because I am more accustomed to their iconic MLB counterparts.

You go to these games and even though it is Division I action there seems to be a sense of duty calling those forth in attendance. The light crowd is mostly parental, skewing much older than the standard NCAA demographic. They’ve parked sensible cars in a distant lot on an icy night along the Hudson. They don’t care if the Red Foxes are 5-21 and playing like Red Foxxes. They stoically gaze through a sightline with rows of empty seats framing the players like a Norwegian woodcut. The crowd is small but appreciative and paying attention to such details as who has the possession arrow, letting the refs know with a throaty reminder. There is a zany student section of shirtless guys in body paint, and the pep band was formidable with a riot grrl drummer type and a “conductor” in a five-dollar sweater—a balding, semi-retired music professor type who’s the antithesis of Bard’s Leon Botstein just up the road. The Marist guy puts as much energy into conducting his band through Black Sabbath’s “Paranoid” as Botstein does with his bowtie bobbing through Bartok.

Nobody warned you the Marist cheerleaders are flinty-eyed Jersey girls applying their makeup underneath the home bleachers as the fans arrive. They look painted and have an underlying burlesque quality about them. The refs look like they’ve been standing in the close shadow of the pyramid of shaky cheerleaders for years, knowing somehow their own clavicles will not be shattered by a sudden drop of the girl on top. The assistant coaches, especially the off-the-rack phalanx surrounding Iona skipper Tim Cluess, look like the most abrasive cadre of personal injury lawyers you’ve ever seen with their Thom McAn dress shoes scuffing the court.

But then again, being up so close to the action the orangeness of the ball stands out and during several stretches Iona whipped “the rock” around the perimeter with brilliant velocity and precision. Following the ball and the ball only can be hypnotic. Spectators can also fall victim to no-look passes or head fakes by quick forwards cutting through the paint. Even the opening tip has its balletic qualities as the ref raises the orb trying to out-toss the towering centers with a fair lob. The controlled-cheating can also be fun—the illegal screens, violent picks, a charge taken violently at the top of the key. Basketball is the only sport where the refs keep their whistles in their mouths like a Matt Groening caricature. They blow the whistle and play stops and the guilty kids have comical “who me?” expressions on their faces that date back to the game’s origins during the winter of 1891 in Springfield, MA. When they aren’t preening in their baggy Capri pants or shouting at the ref, these student-athletes can be most entertaining.

First place, last place. It’s all right in front of you on a frigid Friday night in Poughkeepsie.