The Orioles Can't Play in the Offseason

Trading Jim Johnson made sense, but now what? 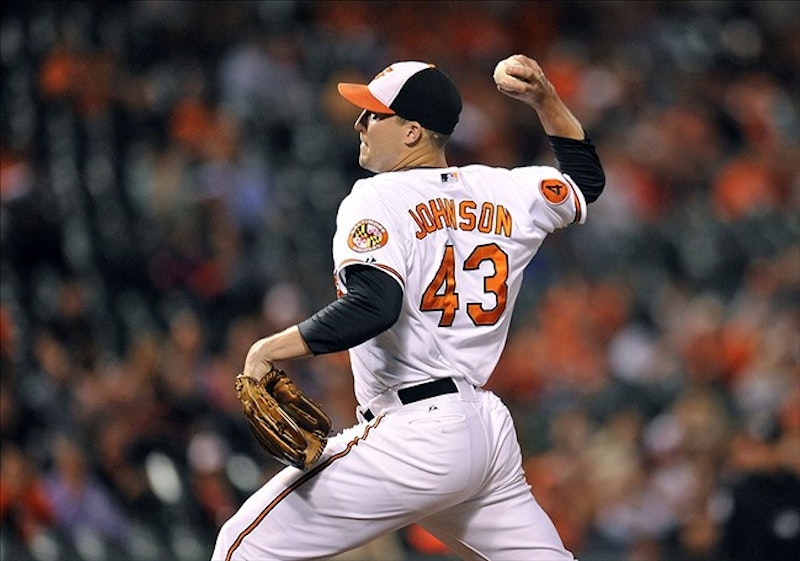 The Baltimore Orioles confirmed baseball's worst kept secret when they dealt closer Jim Johnson on Monday to the Oakland Athletics for second baseman Jemile Weeks. Johnson, who had saved 101 games over the past two seasons, was rumored to be on the trading block since the end of the regular season. The trade ticked off the Baltimore faithful and raises more questions than it answers for the Orioles.

The reasoning for moving Johnson is sound. As an All Star and established closer Johnson figured to be awarded a contract in excess of $10 million for the 2014 season. GM Dan Duquette didn't feel like he could pay a closer that kind of money and address the team's needs at second base, left field, starting pitcher, and designated hitter. Baltimore figures to have an Opening Day payroll of somewhere around $100 million. Allotting 10 percent of a projected payroll to a 70-inning relief pitcher is a luxury few teams can afford. The Orioles will probably turn to Cardinals’ castoffs Edward Mujica or John Axford as lower cost options.

The acquisition of Weeks is fairly inconsequential. The 26-year-old has compiled an unimpressive .677 OPS in parts of three major league seasons. Weeks will be thrown into Baltimore's second base competition to battle the likes of Ryan Flaherty and Cord Phelps while the Orioles buy a few months of Triple-A seasoning for prospect Jonathan Schoop. Weeks has outfield experience as well which, coupled with his speed, makes him a candidate to stick as a utility player. Weeks also has minor league options remaining, so he could shuttle between Baltimore and Norfolk next summer. Jemile Weeks is a just a guy. Think Alexi Casilla 2.0.

A real assessment of the Johnson trade must wait until after the conclusion of baseball's offseason. Baltimore has plenty of cash to spend and payroll flexibility with Johnson, Brian Roberts, Jason Hammel and Scott Feldman off the books; not to mention $25 million in new TV revenue. The O’s could go a long way to quelling the negative backlash of the Johnson trade if they take the savings and bring in a bat like Carlos Beltran or Nelson Cruz and an established starting pitcher. The problem is that Baltimore fans have seen this sort of thing play out before. The Orioles are often a rumored suitor for free agents but rarely a final destination. While fans will hope for Beltran and Ubaldo Jimenez they're more likely to get Rajai Davis and Tommy Hanson.

My initial reaction to the Johnson trade was to rail against Peter Angelos for hamstringing his front office with an artificially low payroll but I’ll save my breath. We all know the score and it’s not changing anytime soon. Dan Duquette is operating with the budget provided by ownership, a budget that doesn’t support a $10 million closer regardless of how successful or popular he may be. Duquette will need to be aggressive and creative over the next few months to win back the trust of the fans and his own clubhouse as he works against ownership to field a winner.