The Milwaukee Brewers are open for business! 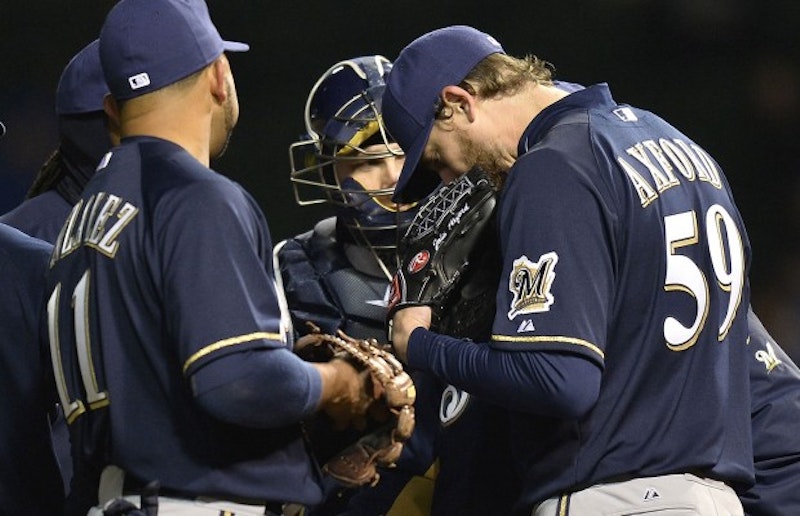 Why are the Brewers performing so poorly this season? Unlike many other losing teams, Milwaukee has several players who’re playing extremely well. There’s the obvious two: Carlos Gomez and Jean Segura, but the Brew Crew also have an impressive supporting staff, with guys like Norichika Aoki, Jonathan Lucroy, Yovani Gallardo, Kyle Lohse, Brandon Kintzler, Jim Henderson, and Francisco Rodriguez putting up great numbers. Either way, they’re 34-49, 18 games back in the NL Central, so, without a doubt, GM Doug Melvin will be selling off some spare parts this summer. But with a relatively bare farm system, and a tough division (that will get even tougher once the Cubs start contending again), why stop at spare parts? If Melvin were smart, he’d take advantage of the thin trade market and hold an all-out fire sale. As much as I’d like to see a bidding war for Gomez start this summer (who doesn’t love a good blockbuster trade?), I can’t recommend a trade of the center fielder. Segura and Ryan Braun ought to be the only other untouchables.

Yovani Gallardo: With a career marred by inconsistency and unfulfilled promise, Gallardo looks to be one of the most, surprisingly, sought after players this summer. Currently burdened by a 4.78 ERA with a 4.07 FIP, the righty is in the midst of, statistically, the worst season of his career. Teams are still calling, however, likely due to his affordable contract and immense, if somewhat dampened, upside. The Diamondbacks were allegedly considering including top prospect Tyler Skaggs in a potential deal.

Jonathan Lucroy: You’d think that Melvin would want to hold on to Lucroy, a good, though not great, hitting catcher who’s locked up to an affordable contract. All evidence would suggest otherwise, as Melvin has expressed his willingness to discuss most members of his team. The Blue Jays, who have netted a combined -.03 fWAR from their catchers, could be seriously interested.

Norichika Aoki: Only under team control through 2014, unless signed to an extension, Aoki doesn’t present much value for the team going forward, assuming they’re not going to contend in 2014. One of the most successful, and under the radar, Japanese imports of the last five years or so, Aoki quietly put up 2.6 fWAR in 2012, and has racked up 0.8 fWAR so far this season. Though his power has dipped a little, the speedster can play all three outfield positions, making him a valuable commodity this summer.

Kyle Lohse: After stupidly signing the vet to an ill-advised three-year/$33 million contract this March, forfeiting a draft pick in the process, Milwaukee may very well trade the righty four months later. The question is: who would want him? Now that Lohse isn’t tied up to draft pick compensation, probably a couple of teams, but I don’t see why. He’s basically performed up to expectations thus far, posting a 4.18 FIP to go along with underwhelming strikeout numbers and, to his benefit, an impressive BB/9. With a market thin on pitching, Melvin might just be able to flip the righty for something valuable.

The Relievers: Here’s a general rule that all GM’s should follow: if you’re selling, always trade off your relievers for maximum value, no matter their age, contract status, or sentimental connection to the team. Relievers are relievers for a reason: they failed as starters. Inconsistency, injuries, and the lack of more than one strong pitch are just a few examples. Cash your chips while they’re hot, Melvin, you could make a killing ripping apart your bullpen.