Baltimore’s former GM is the reason the O’s are competitive. 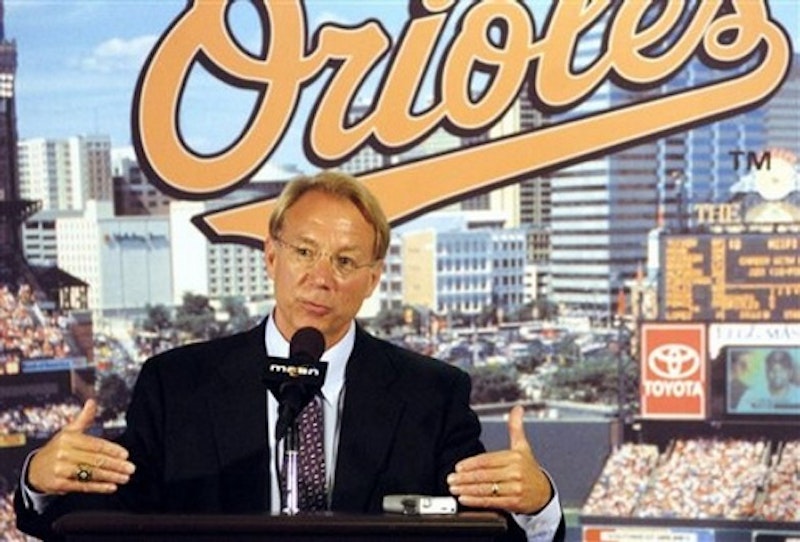 When the Baltimore Orioles dealt Koji Uehara to the Texas Rangers for Chris Davis and Tommy Hunter two summers ago I thought it was an impressive haul for a mid-30s reliever. Hunter was a hard thrower with a 14-win season on his resume and Davis sported some prodigious minor league power numbers along with a swing and miss fetish. Now with the benefit of hindsight the Uehara deal looks like a heist along the lines of Larry Andersen for Jeff Bagwell. Thank you Andy MacPhail.

After years of staying up late to catch a glimpse of the Baltimore Orioles’ token All Star selection the 2013 game had a decidedly different feel. It was just three years ago that the O’s lone All Star was infielder Ty WIgginton, a solid and useful player who had no business on an All Star squad. While Dan Duquette and Buck Showalter have received the lion’s share of acclaim for returning to Orioles to the ranks of contention it was MacPhail who laid the groundwork.

The 2013 Baltimore Orioles had five players (Chris Tillman, Adam Jones, Chris Davis, J.J. Hardy, Manny Machado) selected to the All Star Game for the first time since 1997: all five were acquired by Andy MacPhail. After taking charge of Baltimore’s baseball operations in 2007, MacPhail embarked on a massive rebuilding project. The rebuilding of the O’s was about a decade too late and finally occurred only after a half-hearted rebuild (Syd Thrift era) and several expensive patch jobs fell flat. Following the 2007 season MacPhail dumped Miguel Tejada’s contract on the Astros and traded former 15-game winner Erik Bedard to the Mariners for a package of five young players that included 2013 All Stars Jones and Tillman.

Jones has emerged as the face of the Orioles over the past several seasons. The affable center fielder has won two Gold Gloves, made three All Star appearances, developed into a team leader, and shown his commitment to Baltimore by signing a six-year extension last season. Tillman took a different path to the festivities at Citi Field. After making his big league debut with the Orioles in 2009 as a 21-year-old Tillman struggled to establish himself in the Majors. The big right-hander was the headliner of Baltimore’s much discussed “cavalry” of young hurlers but after 36 starts over three seasons Tillman had just seven wins and an ERA well over 5.00. Tillman, who started the 2012 season at Triple-A Norfolk, has been one of the Orioles’ top starters over the past two seasons, with 20 victories to go with a mid-3.00s ERA over his last 34 starts. For all his early career struggles it’s hard to comprehend that Tillman is still just 25 years old.

MacPhail traded minor league relievers Brett Jacobson and Jim Hoey to Minnesota for J.J. Hardy in December of 2010. Hardy got off to a fast start in Baltimore clubbing 30 homers in 2011. He won a Gold Glove last season and rebounded from a slow start to 2013 by winning the fan vote to start the All Star game at shortstop. Hardy, who is signed through 2014 and the only man standing between Manny Machado and his rightful place on the infield, has been one of Baltimore’s steadiest performers since his arrival.

MacPhail’s front office used the third pick in the 2010 draft to select Manny Machado out of a Miami high school. Machado quickly ascended to the Majors last summer locking down the left side of the Baltimore infield. Machado has made the most of his comfy spot in Showalter’s lineup to lead the league in doubles. His emerging power and highlight reel of defensive gems make Machado a likely mainstay on the American League All Star squad for the next decade.

Chris Davis stunned the baseball world with his power display in the first half of the season. Critics and cranks have started to point an accusatory finger at Davis and question the validity of his on-field accomplishments. It should be noted that at the time of his 2011 trade to Baltimore the then 25-year-old Davis was demolishing Pacific Coast League pitching to the tune of a 1.229 OPS with 24 home runs and 66 RBIs in just 193 at bats. Davis was injured shortly after coming to Baltimore and shuffled all over the field and lineup in 2012. This season marks the first time that Davis has had a guaranteed spot on the field and in the lineup since he broke into the Majors with the Rangers as a 22-year-old rookie in 2008.