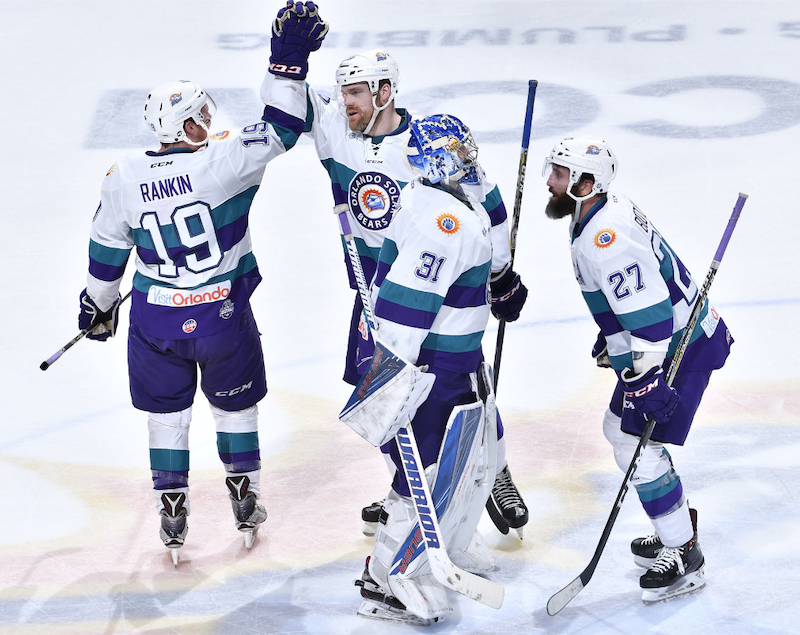 The departing old man of 2017 tapped me on the shoulder as I was midstride in the pedestrian tunnel connecting the Geico Parking Garage to the Amway Center in Downtown Orlando. I did not respond. I was running late, and at the threshold of the Amway Center I took care not to sign anything or agree to any plans or buy cleaning products or try to enlist three friends to sell various items.

Out of my way, multilevel marketers, don’t try to get between me and my minor league hockey! Time to enjoy one more underattended, obscure sporting event to write about and close out the calendar. The vulcanized rubber puck was getting itchy in the ref’s hand and he was about to drop it at center ice with a fresh clock on the scoreboard gondola. Ex-Ranger Derek Stepan's cousin is on the roster of the ECHL Orlando Solar Bears, an affiliate of the Toronto Maple Leafs. While 27-year-old Derek suffers in the NHL desert of Glendale as a member of the lowly Arizona Coyotes, I thought I'd see how his cousin Zach was holding up in the land of Disney and pyramid schemes. Turns out the 23-year-old Minnesotan was a healthy scratch for Orlando.

It was an 80-degree Wednesday after Christmas, with the rest of hockey nation under some type of wind chill warning. I was in search of a year-ending dose of incongruity. Floridians bundled and gazing at a white surface covered in speeding behemoths decked in bright woolens. It all makes sense as much as it doesn't make sense. And, of course, there is an underlying sadness to these hockey failures plying their trade in a massive NBA arena in yet another soulless downtown. The Solar Bears were taking on the Jacksonville IceMen, a team with only 7 wins occupying the cellar of the ECHL southern division. There should be a regional rivalry angle here, but little geographical tension exists between Orlando and Jacksonville. The IceMen are affiliated with the Winnipeg Jets of the NHL and they were wearing L.A. Kings style uniforms on the powdery ice of the Amway Center. The Solar Bears, still waiting for the public relations momentum of the ironic viral photos of starving polar bears forced to swim in the melting Arctic, were decked out in Anaheim Ducks colors. Their logo crest features a polar bear wearing sunglasses with a hockey stick resting on his shoulders with a blazing sun disk behind it. The IceMen have some type of facefront masked Yeti dude in a parka coming at you off their jerseys.

The Solar Bears are owned by the DeVos family, the Amway billionaires who also own the Orlando Magic NBA team. Among the ownership clan is current Secretary of Education Betsy DeVos, who might use the Solar Bears logo to put a happy face on President Trump’s denial of climate change dangers.

It is all a colorful gas when I recall 10 hours prior to the game I was standing in the surf of the Atlantic squinting at the silvery sun of late morning blasting pure light off the robust waves. I looked down because I thought perhaps I had stepped on a hawk-wing conch shell only to look up and see a lone, graceful surfer silhouette bobbing and weaving nearby. As I settled into my second-row seat for Orlando hockey, there was a massive Jacksonville defenseman named Klotz doing a similar ballet along the blue line, a massive black flamingo with uncanny balance striving to stay onside as his teammate entered the offensive zone with the puck. Though there is no game program whatsoever, not even a folded sheet you might be handed at an NPSL soccer match, (“check with guest services,” a betty in the gift shop said when I asked) I come to find out he is Garrett Klotz, a six-foot-six native of Regina, Saskatchewan. Since 2010, Klotz has laced up skates for teams in Greenville, Fort Wayne, Wichita, Indianapolis, Elmira, and Quad Cities.

The announced crowd was 5,860 in an arena that holds 17,353 for ice hockey. No amount of Amway markup can change the fact the hockey crowds seem even tinier than they are in this environment filled with ads for Sonny’s BBQ right beside defense contractor Harris Corporation. The attendance proves that ice hockey is about 14th on the Central Florida Leisure Depth Chart, right ahead of Domestic Violence and one behind Confederate Hero Statue Hugging.

The first period featured a hungrier Jacksonville squad taking a quick 1-0 lead. A few seats over an overly aggro glass-pounder stood up. He was four years older than I, but wearing the exact same khaki Gap button-down long sleeve shirt pulled from the early ‘90s bottom drawer of the dresser. I feared a gang-affiliation of some kind, or perhaps he was just venting anger because the local kids would not stay off his garden shed. Perhaps he noticed that “big Government” had taken over the color of the goal pipes. Most ECHL arenas feature blue goal pipes (instead of the blood red of the NHL) painted with the GEICO logo. GEICO stands for Government Employee Insurance Company, last time I checked. To my right was a Manhattan film editor type of guy wearing an exclusive Rangers season ticket holder cap, treating the board glass as if it was a vending machine that had denied him his pre-workout energy bar. Looking closely at the plexiglass I notice a child-like Sharpie scrawl of numbers indicating which panel goes into each slot. As I stare a little too closely, the young girl in row 1, who looks exactly like Don Draper’s daughter from Mad Men, gives me the fish eye above her perfectly-sized Solar Bears replica jersey. She is seated next to the standard issue large guy in a full Real Madrid tracksuit. There is one of these guys at absolutely every sporting event I have ever attended. Any contest is not official until the Real Madrid track suit guy is seated, usually in the pretty good seats. The rest of the sparse crowd is British tourists, families vacationing based on local NCAA bowl games, dudes wearing gold chains and sideways Angels caps while on dates, and hyperactive sons trailing beer-toting dads and the usual hockey nerds. The Wayne’s World demographic, only more tanned, is definitely in the house.

A wander during the first intermission proves again the small crowds suffer in large arenas. Many of the Amway Center concession areas are closed, shuttered and dark. The sealed-up Heineken bar is a condescending sneer mocking your insignificance and ill-timed attendance. In the bowels of the Amway Center I found a Cuban Grill concession with a fairly good Cuban sandwich served by a staff trying to figure out the baffling computer cash register which slowed even the shortest lines to an unnecessary crawl.

So far there had been plenty of shots on goal but none of the promised minor league goonery and fighting. As the second period commenced, diehards behind me began to demand violence from the home squad. A few minutes later a lame fight behind the Jacksonville goal that ended when Orlando forward Kyle Rankin fell down while the aforementioned Klotz of Jacksonville dropped hammer blows down on the middle of his back. The shots on goal continued to rain down on each goalie and the second period ends with the IceMen up 3-2. Kneeling in front of me, completely exhausted by his efforts on the power play to end the period, was Orlando forward Kristian Pospisil. The Slovakia native skated his ass off the entire game. He caught his breath as he watched Jacksonville shuffle off the ice, no doubt feeling in his lungs every clove cigarette his great-great-grandfather might have smoked back in 18th century Bratislava. If during these ponderous athletic moments when some of these tired minor leaguers might look upward wondering why they bother, their eyes will wander and disappear into the massive headroom of an arena like the Amway Center. This is no converted airplane hangar in Alberta with low-hanging I-beam rafters, this is no junior college skating rink outside Toledo with caged-off low-hanging light fixtures. The Amway Center roof is infinite darkness. Strain your eyes and you can catch a swatch of the Orlando Magic divisional banners or that odd Solar Bears 2000-2001 Turner Cup champions banner stashed way in the southwest corner like some faded middle school volleyball honors. Thoughts rise up and keep rising into the blank space, resulting in crippling self-doubt, so it's best not to look up.

As the third period opened with end-to-end action on the fresh ice, I noticed during the first stoppage that ECHL players tend to cheat much more on positioning during face-offs. I also noticed the Orlando home ice appeared to be using actual goal judges seated front row behind each net. Very old school.

Orlando tied the game in the third when Joe Perry (Nanaimo, British Columbia) mis-hit a stuff-in from a close angle off a long blast from teammate Chris LeBlanc, a rookie who hails from Winthrop, Mass. Regulation ended 3-3 with the small-time spectators somewhat jacked-up as bonus hockey presented itself.

In the end, Orlando prevailed 4-3 in a classic three-on-three overtime thriller. Pospisil, seemingly refreshed by the short break after the third stanza, fed a beauty of a pass to his lunch pail teammate Alex Gudbranson who buried the game-winner which was his first goal of the season. The bearded Gudbranson, a defenseman from Orleans, Ontario, had also worked hard on each shift and was overjoyed, along with the 5,000 or so in the stands. It was Pospisil’s second assist of the game and it led to the 66th shot of the evening. The win moved the Solar Bears into fourth place in their division.

Watching Jacksonville players leave the ice after such a dramatic loss was a powerful sight from the second row. The emasculated IceMen skated in tiny, fatigued strides toward the dressing room, looming in black, heads down at the exact same angle as the figures in Edvard Munch’s painting “Death in the Sick Room.”