Mismatch now hyped as a “superfight.” 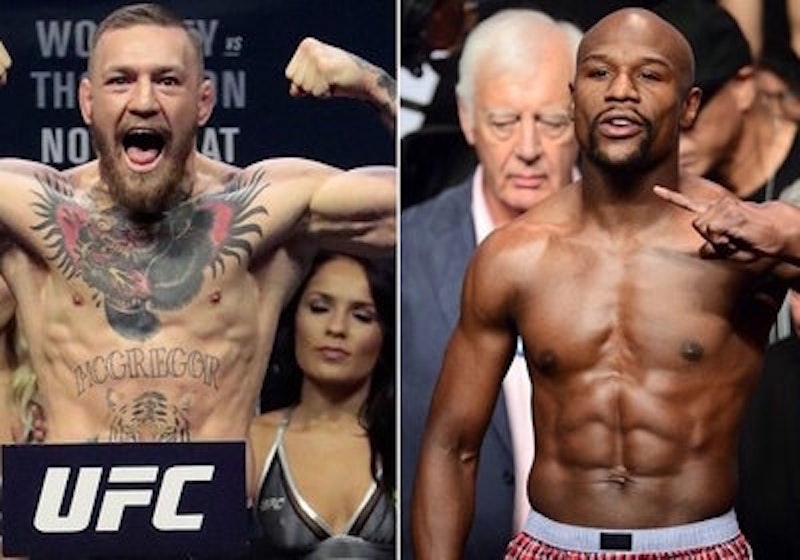 Imagine that a guy, who's never participated in a sport, will receive $100 million for his first effort. Baloney, you’d probably say. But that's what will happen this summer to the UFC's reigning lightweight champion and one-time plumber, Conor McGregor, when he fights former world champion boxer, Floyd Mayweather, in a boxing match that's shaping up to be the biggest sports scam in history.

The media won't tell you that. The hype machine’s revved up about the “dream matchup” now that Yahoo News has broken the story. TMZ announced it on Twitter with: “Its on!!! Mayweather McGregor on August 26th!!” In the video accompanying the tweet, TMZ also reported that Mayweather told them that the brash Irishman has a shot at beating him, which sounds more like marketing than boxer talk. “Pretty Boy” Floyd’s not known to be self-effacing when he's talking up a fight.

Someone’s emptied out a bottle of Fiji and filled it up with some Flint, Michigan tap water, but many haven't noticed. I've seen reports that ringside seats for the spectacle are selling for around $100,000. Suckers from all tax brackets will be lining up to fork over their cash for this upcoming boxing mockery. Jay-Z, Kanye, Drake, and all the gang will be seated ringside, lest we forget that this is a major cultural event.

The 28-year-old McGregor’s a showman. Immediately after Yahoo News broke the story, he trolled his undefeated (49-0) opponent’s age by tweeting a photo of his next opponent that was actually Mayweather’s father. Mayweather’s 40, one of the few things working to McGregor’s advantage, but his type of boxer—the kind who rarely takes a square punch—can fight at a high level well into their fifth decade, especially against rookie boxers.

“Watch me step in and shock the whole damn world,” said the cocky newcomer. “I'm 28, a confident motherfucker.” When Mayweather’s boxing skills lay waste to the bravado, at least the dapper UFC champion will have earned a king’s ransom for his trouble. A tenth of a billion dollars will buy an awful lot of those fine bespoke suits the Dublin native’s so fond of.

As a UFC mixed martial artist, McGregor can draw upon his past training in boxing, kickboxing, taekwondo, and karate, but facing one of the greatest boxers in history, his only weapons will be his punches—no leg sweeps or takedowns this time. Moreover, his fists will be padded by 10-ounce gloves instead of the lighter UFC variety, which will cancel out much of his explosive knockout power, an asset Mayweather doesn't possess.

Mayweather, a defensive specialist, isn't concerned about administering the highlight-reel knockouts his opponent’s known for. While this makes him boring to the knockout-hungry camp of spectators not attuned the nuances of the “sweet science,” Mayweather couldn't care less. “Money,” as he's known, has a net worth Forbes has pegged at $340 million, to which he’ll soon add another $100 million.

The Money style, in a nutshell, is to make the opponent start missing his punches early on, and timing the counterpunches like clockwork. Those punches aren't as heavy as McGregor’s are, but after about 20 of them, they take on added weight. Mayweather’s a loudmouthed flamethrower as a general rule, but inside the ropes he’s cool and calm. As Canelo Alvarez, who lost to Mayweather in 2013, said, “He's a fighter that if with three punches he wins the round from you, he's fine with that.” The hard-punching light middleweight champion Alvarez missed so many punches in that fight that it was hard to keep track of them.

Alvarez has called the August “superfight” disrespectful of boxing. It’s an exhibition match with no titles at stake, packaged by some canny marketers who saw an opportunity to lure Mayweather back into the ring one final time. McGregor will be like a triathlete who’s decided to become a competitive swimmer. He’ll be leaving two-thirds of his competitive tool-kit back home in The Fair City.

A farce will be played out in the Nevada desert on that late August evening. The odds in Mayweather’s favor are about 10-1 now, but they'd be much higher if the Vegas bookmakers weren't expecting so much “happy money” in small bets from all those optimistic UFC fans who know their boy can do what no Mayweather opponent's ever done. Conor McGregor’s trash talking ability is right up there with Muhammad Ali’s, but his boxing skills aren’t honed for this level. Outside of The Octagon, he’ll find himself unprepared.

In light of Mayweather’s surprising decision to allow a weight limit of 154 pounds, McGregor will have size and strength advantages to go along with his superior reach. His only shot is to go for an early-round knockout. Once the match goes six rounds, Mayweather just applies his skills methodically and locks in the decision. McGregor will be the best fighter in Las Vegas on August 26, but only the second best boxer. He’ll win regardless of the result, because when the final bell rings or the referee counts to 10 as he lies on the canvas, he’ll have completed a meteoric life ascension with few historical precedents. Before making his UFC debut just four years ago in 2013, McGregor was collecting €180 welfare checks and fixing toilets.