Although the NFL would forgive him if he were a better quarterback. 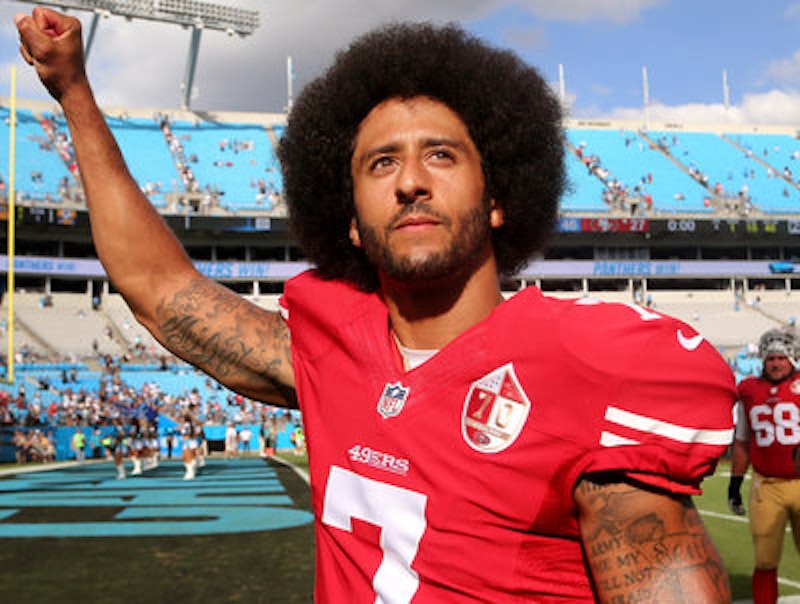 Since San Francisco 49ers quarterback Colin Kaepernick decided to opt out of his contract with the team in March, the player who took his squad to the Super Bowl in 2013 is having a hard time finding work. After he didn’t stand for the national anthem last season in protest of injustice towards minorities in the U.S., there's been rampant speculation that the NFL’s blackballing him.

The most confused faction of the blackball theorists promotes the opinion that this is a First Amendment issue, which isn't surprising given that it's such a widely misunderstood piece of legislation. The Founding Fathers had no intention of telling prospective employers they had to hire someone who’d done something to offend many of their customers. They merely wanted to protect such expression from government sanction, which happened in this case.

And then there are those, like journalist Ryan Brown, who insist it’s all about race. He tweeted, “White sports journalists will say anything to prove that Kaepernick being jobless is not race motivated.” There are plenty of white people, including journalists, who agree that this is all about race, so Brown overstated his case here. There's no cabal of white journalists who write in lockstep on racial matters. Can Brown actually believe that if a white player took a knee during “The Star Spangled Banner” repeatedly that he'd get a pass due to his skin color? We're talking about the NFL here, not the Burning Man festival. Football is a sort of secular religion in the U.S., and playing the national anthem before kickoff is a sacrament. Many of the game’s fans define themselves via God and country, so if you appear to disrespect the emotions embedded in the pre-game ritual you become a blasphemer, regardless of your race.

Those portraying this as a straight-up racial matter shy away from talk of Kaepernick’s performance on the field in recent years because it undercuts their argument. Kaepernick has failed to develop the skills necessary to keep his NFL career on track, which is why the 49ers gave the marginally-skilled Blaine Gannett a chance to replace him last season. While he's perhaps the best pure athlete among all current NFL quarterbacks, he still relies too much on his running ability to overcome his weaknesses as a pocket passer. His ability to read defenses is still suspect, and he continually overthrows receivers on long passes. As Kaepernick approaches 30, he's yet to prove he can move up to the next level. The same can be said of the once-promising Robert Griffin III, another quarterback who’s relied too much on his legs.

Bleacher Report’s Mike Freeman has written that the only reason Kaepernick’s still unemployed is the way he chose to express his political opinions. He's reported that dozens of NFL team officials have told him this. What Freeman's failing to take into account is what these officials left unsaid—that the signal caller, after six years in the league, isn't good enough to overcome the baggage he brings with him to a new team. If the writer actually believes franchises wouldn't be eager to sign the quarterback if he offered them a solid chance to win a lot of games next season, then he's hopelessly naive.

If Kaepernick’s goal was to protest minority inequality while preserving his market value, then his approach was strategically flawed. His former teammate, Eric Reid, thinks what's happening to him is “sad.” “He’s been doing things that if it were anybody else in a different situation without the anthem,” said the 49ers safety, “they would be praising him and giving him awards for it.” NFL teams don't give out such awards, but Reid did correctly identify the root of Kaepernick's problem. He had plenty of protest options, but chose the most loaded one. He also decided to wear socks on the football field that portrayed cops as pigs, an unnecessary provocation that alienated even more fans.

It's still not too late for Kaepernick, who’s one of the better human beings in the NFL, to get picked up by a team. He donates significant sums to charity, got an airline to help him deliver food and water to the needy in Somalia, and gives suits to people getting out of prison so they can look for work. NFL players are continually arrested for DUI, domestic violence, and assault and they get second or third chances to keep playing. It's unfair, but Kaepernick's not being blackballed. That would imply that all the NFL teams are acting in concert, which they're not. He's just at a point where his skill level isn't quite where it needs to be to overcome his sins. Winning is all that really matters in the NFL.