During the French Open, fans get a negative article about an elderly tennis legend. 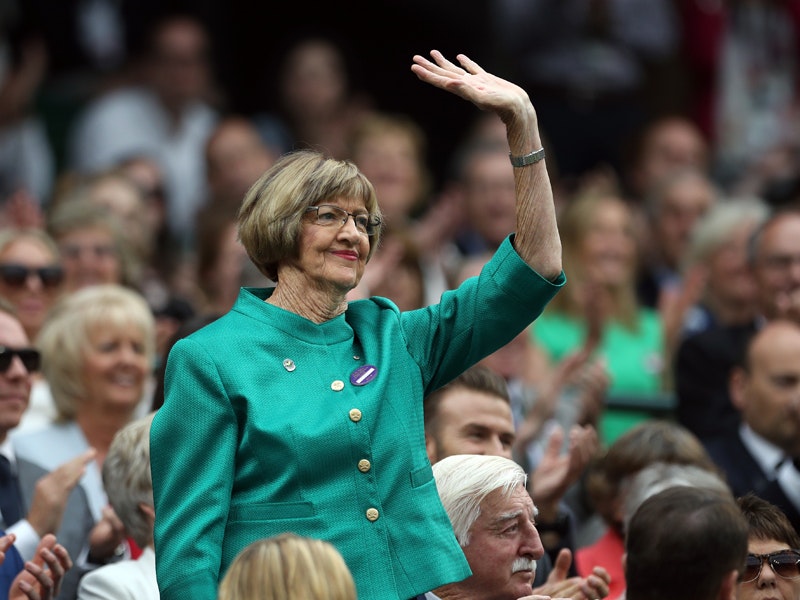 The French Open, one of only four annual Grand Slam tournaments and the only one played on clay, is un événement majeur, as the French might put it. Outside of the lucky few who can make it to Stade Roland-Garros to witness the players sliding around on the red clay, most serious tennis fans, hungry for on-the-scene coverage, turn to their favorite media outlets. Many depending on the New York Times, an organization with a long history of outstanding tennis journalism, would’ve been perplexed to see an article 10 days into the tournament focusing on explaining that pro tennis players now want Australia’s Margaret Court Arena’s name changed because tennis legend Margaret Court, now 74, is a homophobe.

The piece’s headline explicitly states that “players” want the venue renamed, but its writer, Ben Rothenberg, provides a mere three names—current WTA pros Madison Keys and Richel Hogenkamp, and retired tennis great Martina Navratilova. He quotes touring pro Andrea Petkovic as saying that “maybe” the arena should be renamed, and Samantha Stosur offering that she “understands” calls for a new name. The writer's trying to make the case that there's an inchoate grassroots movement underway, sparked by some recent remarks from the ex-tennis champ, but the last thing on players’ minds during the French Open is an issue about a stadium they'll next play at in January of 2018. All competent tennis journalists understand this.

Those choosing to read the article (which includes a link to Times articles on same-sex marriage) in its entirety, rather than seeking actual tennis coverage, might discover further evidence that this issue looms much larger in the mind of its author than it does in the tennis world’s. One might even be inclined to feel that the headline was purposefully misleading, a major disappointment from an organization that's claiming to be on a campaign to root out The Truth.

Reverend Margaret Court, who's won more Grand Slam tennis titles than any woman, claims to have received a “call from God,” which prompted her to found the Victory Life Centre, a Pentecostal ministry in the Perth area, in 1995. Unsurprisingly, her outdated views on the LGBT issue, which she's been spouting off about for years, qualify her as a bona fide homophobe in this era. She's just caused another stir by calling out Qantas CEO Alan Joyce for supporting same-sex marriage, which isn't legal in Australia. She won't fly on his airline any more, “where possible.” Court followed that up by telling a Christian radio station that tennis was “full of lesbians” who “took young ones into parties.” She didn't help her cause by comparing modern society’s permissive attitudes towards transgenderism with what Hitler and his Nazis once did to the malleable minds of children. While her choice of words was clumsy, which generally holds true with Hitler references, she wasn't actually making a direct comparison to Nazism.

While Rothenberg writes, “the tide within tennis seemed to shift” when WTA pro Casey Dellacqua tweeted “Margaret. Enough is Enough,” he provides scant supporting evidence of any sea change. Nor does he make the case for changing a stadium’s name based on its namesake’s outspoken religious views. Were this the case, then sports facilities should never be named after people associated with conservative religious movements, even if they’ve won an astounding 62 Grand Slam titles as Court has. Unanimously, these fundamentalists believe marriage is strictly a man-woman affair, and some feel an obligation to speak out. That's how religions work. Court’s current views on gay marriage aren't that different from Barack Obama's in 2008, when he said, "I believe marriage is between a man and a woman. I am not in favor of gay marriage." He didn't soften that view, which was based on his Christianity, until 2012.

A look at Rothenberg's Twitter timeline reveals that he's fixated on Margaret Court now in an activist sense. He tweeted out a clip of him asking Canadian player Genie Bouchard at a press conference to comment on Court and “what Tennis Australia should do,” with this comment: “The transcript doesn't note Bouchard's pronounced eye roll.” He leaves it to the viewer to interpret her body language. Perhaps she's being dismissive of an important social issue and needs to be shamed. An alternative interpretation is that a tennis pro is focused on a major tournament, doesn't need this (or any) distraction, and is annoyed at the inappropriate “gotcha” question from an activist/journalist.

Bouchard needs to be wary of Rothenberg, as do the other players he'll be interrogating as he continues his anti-Court campaign. The writer once falsely suggested on Twitter that ESPN announcer Doug Adler had made a racist comment against Venus Williams during a broadcast, stoking an online mob under the imprimatur of the Times that eventually led to the sports network sacking him out of cowardice. As he's never contacted Adler (who subsequently had a heart attack) and has never apologized, one cannot assume he has any attachment to the regular ethical standards of journalism, even though his work appears in a prestigious publication. There’s the whiff of a predator about Ben Rothenberg.