Matt Garza is Some Team's Next Mistake

The Cubs hurler is merely above average. 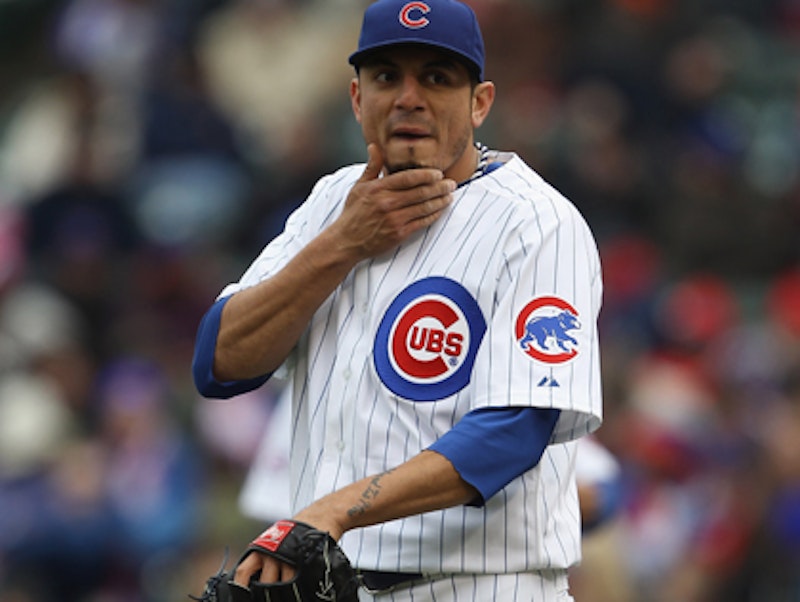 Why all the current hype about Matt Garza? This isn’t new: in January 2011, after a pedestrian 1.6 fWAR season, the Rays traded Garza to the Cubs for an enviable package of prospects. Now two months into a mediocre 2012, many teams are willing to surrender their young players for the right-hander all over again. New Cubs President Theo Epstein is looking to replenish his top-heavy farm system with this trade. “Good luck with, that,” right? Wrong, apparently. A frenzied bidding war is a possibility, potentially netting the team a better set of prospects than the ones they initially gave up. For whatever reason, the 28-year-old is thought of quite highly in many front offices, and it’s looking likely that some club will jeopardize their future for a slightly above average starter.

Because of the atrocious CBA, this year’s trade deadline will be thin with sellers (also read as: boring), and Garza will be the only “ace” on the market. Here’s the thing, though: the guy isn’t an ace. He’s not even a solid number two, at least not this season. Garza is the proud owner of a 4.10 ERA, which agrees with his nearly identical 4.09 FIP. Take into account a lower K/9 and higher BB/9 as compared to last year, and a tiny .255 BABiP, and it’s becomes easy to see why so many clubs are enamored with the hurler. Oh wait… no it doesn’t.

Every team that remains in contention will check in on the right-hander. The Yankees, Blue Jays, Red Sox, Rangers, and Dodgers have already shown interest (I wouldn’t put too much faith in the Jays alleged interest, though, as GM Alex Anthopoulos has jumped from playfully misleading to slightly annoying to pathological liar rather quickly in his short, but admittedly successful, tenure with the team). New York, now in need of pitching after starting the spring with seven starters, is looking like the most likely landing spot for Garza. Mason Williams and Gary Sanchez, two coveted prospects, would be the two cogs necessary to finish a potential deal. That may seem like a steep price, but remember, we’re talking about a 2.0, maybe 2.5 win player here. Those don’t come around too often.

In fairness, Garza did put together an excellent 2011, with a total 5.0 fWAR. Repeating that performance seems like quite a task, though, with the way he’s been pitching. It’s not like the guy is cheap or controllable, either. With one more season of arbitration left until free agency, he’ll look to earn close to $14 million in 2013. A potential extension would undoubtedly cost over $80 million. And really, who wants Garza at age 34? Probably everybody, that’s who. Why? Don’t ask me.

Epstein and GM Jed Hoyer will preach about their desire to extend Matt Garza long-term until the day he’s traded. Those sentiments will be empty, but in theory it can only improve his trade value even more. Media blurbs about an “Everything Must Go” will be evenly spaced out between now and the weekend of July 29th. Already, there’s the ludicrous notion that star shortstop Starlin Castro is on the block. Castro isn’t going anywhere. They’ll be building around him with all the new prospects they get from the inevitable Garza rip-off.