Baseball is a Carnival in Harrisburg

It's no amateur hour in Pennsylvania. 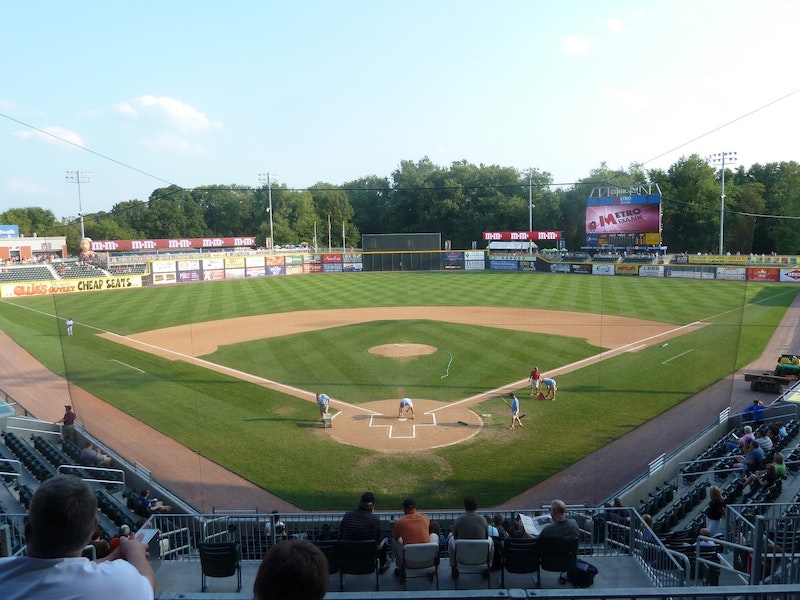 My wife headed to her grandmother's house over the weekend to assist with some spring cleaning. The trip also allowed the chance to take a rare break from the daily rigors of being a stay-at-home mom. Her departure left me alone for three days with our five-year-old son and two-year-old daughter. What to do?

I'm a sucker for a ballgame. Whether big league or little league makes no difference to me. On one trip to the beach during my college days I drove by Perdue Stadium in Salisbury, MD, a sign along Rt. 50 stated "Game Today," and pulled into the parking lot and slapped down six bucks for a general admission seat. While my friends waited for me at the beach I spent the next 15 innings watching a 1-1 tie that featured then hot shot Orioles' prospects Ryan Minor and Calvin Pickering. I finally figured that my friends might have been worried and left the ballpark to resume my trek to Ocean City. I heard the end of the game just a few moments later on the radio. I was angry for not staying until the end of the game. Yeah, I'm an odd bird.

Left with three days to my own devices, and two kids to entertain, I quickly scanned the schedules of all the local baseball teams to see where we'd be heading. As York County residents we’re within an easy drive of four minor league teams as well as the O's, Nats, and Phillies. The hometown York Revolution was playing at rival Lancaster, a short drive away. The surprising Orioles and Nats were engaged in their annual "Battle of the Beltways." The Harrisburg Senators were playing host to the Bowie BaySox. Bingo!

I chose Harrisburg for a few reasons. First, I wanted to see Bowie's Manny Machado and Jon Schoop in person. Machado, the Orioles' top prospect not named Dylan Bundy, is a 19-year-old shortstop holding his own in Double-A. Schoop, 20, is Machado's double play partner. Second, Metro Bank Park on Harrisburg's City Island is a terrific place to watch a ballgame, complete with enough entertainment options to keep my knee-high dates for the day sufficiently occupied.

We made the 20-minute drive from our house to City Island, handed over $3 to park, and walked towards the ballpark. There were about a thousand people standing on line.  What the hell? I've never stood on line to get into a minor league ballpark and I wasn't about to start now. I quickly discovered that it was Bryce Harper jersey night. The first thousand kids through the gate would receive a free jersey. I hate standing on lines more than I like free jerseys. We made a beeline for the City Island railroad.

The railroad costs about two bucks and takes you on a five-minute ride around the island. We passed a mini golf course that sent my son into a frenzy. The thought of attempting to corral my daughter on a mini golf course located precariously close to the Susquehanna River didn't appeal to me, so I promised we'd return to play golf one day when his mother could join us. We passed the soccer stadium, home to the City Islanders, which contained about 100 people milling about the sidelines and sitting in folding chairs. The train soon returned us to the station. We made our way over to the carousel, which is admittedly not in great shape but got the job done. With less than hour until game time I decided we should probably head into the ballpark.

As we walked in we were greeted by the Metro Bank mascot, a strange fuzzy creature that looked like the love child of the letter M and Mr. Met. My daughter slapped him five on his oversized white glove. She then looked up to me and proudly announced "Daddy, I'm not afraid of mascots anymore!" We walked through the turnstile and found some people cleaning up the folding table where the free jerseys had been stacked. I was explaining to my kids that we missed the jersey giveaway when a woman walked up to us and said, "Check the other gate by the smoking section. They probably have some over there."

We walked through a cloud of second-hand smoke and approached the table near the entrance gate. I held up our tickets and said, "They ran out of jerseys over there and sent us over here." The stadium employee handed over two jerseys without saying a word. My daughter insisted on wearing her new jersey immediately. It looked more like a nightgown than a jersey, but she was thrilled. We made a stop at the play area with a promise to return later before finally settling into our seats in the left field bleachers.

The kids have been quickly indoctrinated into the ways of the ballpark. They both respectfully removed their caps for the National Anthem, and then immediately dove into the bag of peanuts I brought from home. We cracked shells, shoveled peanuts into our mouths, and narrowly dodged a Machado ground rule double that came within about five feet of us. The Bowie bullpen was in view of our seats, which fascinated my tee-ball playing son. He peppered me with questions that I was all too happy to answer. BaySox third baseman Zelous Wheeler, a fireplug-shaped fellow, did his best Mark Reynolds impression as he booted a couple routine grounders. Machado is a huge shortstop who lived up to the hype. He added a couple singles to his double. The peanuts kept the kids busy until the end of the fourth inning, a pretty good run for us, when I finally succumbed to their requests to go to the bounce house.

From there it was bounce house, kiddie batting cage, and a trip to the aforementioned cotton candy stand. We got back to our seats in time to see the seventh and top of the eighth inning. It was almost nine o'clock, time to head home. We got back to the minivan, fingers sticky from cotton candy, smiles on faces, the promise of a return trip to challenge momma to some mini golf, a good time had by all, and all for less than $45 out of Dad's pocket. I still don't know who won the game, and this time I don't really care.