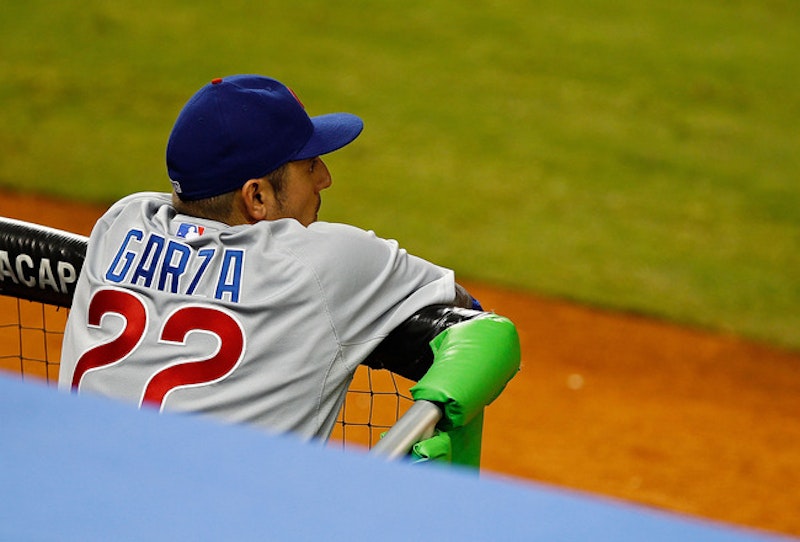 The Chicago Cubs have a dilemma. The team as currently constructed isn't a contender. The front office has made no bones about the intention to rebuild the team. Now the question is what should the Cubs do with Matt Garza?

Garza isn't an ace, but he may be on the verge. After a solid 2011 campaign Garza has been dominant so far in 2012. He's signed through the 2013 season but the Cubs would likely prefer to make a decision on the right-hander's long-term future before the start of next season. Chicago could deal Garza for a handful of prospects in hopes of jump-starting the rebuilding process. On the other hand they could extend Garza's contract and make him a cornerstone to build around for the future.

Garza came to Chicago as part of an eight-player trade with Tampa Bay prior to the 2011 season. The Rays were looking to dump some salary, as they often do, and found a willing taker in the Cubs. Chicago was hoping to make one last desperate run at the post-season with an aging, expensive lineup. The Cubs bit the bullet, dealt prospects for Garza, and drew much criticism for making such a short-sighted move.

In retrospect the trade has worked out well for both sides. The Cubs clearly got the best player in the deal. Garza is at worst a number two starter. Tampa cleared the necessary payroll to plug several roster holes. The players the Rays received in return for Garza have been a mixed bag. Sam Fuld had some highlight reel catches last season but he's a fourth or fifth outfielder type. Robinson Chirinos was more suspect than prospect and is already out of the Rays' organization. Brandon Guyer looks like a AAAA player. Chris Archer and Hak-Ju Lee, the crown jewels of the deal, have struggled in the upper minors and neither figures into the Rays' immediate plans.

That brings us back to the Cubs’ dilemma. When you look back on the Garza deal it doesn't look like the Cubs gave up all that much at all. A few warm bodies and a pair of lotto tickets. If that's all Chicago can figure on getting back for Garza they'd be much better served signing him to an extension and making a play for a free agent starter like Cole Hamels or Zack Greinke in the offseason.

The history of teams trading top-flight starting pitchers is filled with failed prospects and missed opportunities. The Blue Jays’ trade of Roy Halladay to the Phillies for prospects Kyle Drabek, Travis D’Arnaud, and Michael Taylor may be the best of the bunch. Drabek has emerged this season as a solid starter for the Blue Jays and D’Arnaud is currently Toronto’s best prospect.

The Indians traded two aces in recent years, Cliff Lee and C.C. Sabathia. Lee went to the Phillies in 2009 for a package of prospects that included Lou Marson, Jason Knapp, Carlos Carrasco and Jason Donald. Knapp has missed the past two seasons due to injury. Donald has failed to impress despite numerous opportunities with the Indians. Carrasco is recovering from shoulder surgery and Marson is a career .211 hitter in nearly 200 big league games.

The Indians dealt Sabathia to Milwaukee in June of 2008. The package of prospects they received consisted of Rob Bryson, Zach Jackson and Matt LaPorta. Jackson washed out after a few starts for the Indians in 2009. Bryson is currently pitching in Double-A. La Porta compiled a career .701 OPS in parts of three seasons with Cleveland before starting this season at Triple-A Columbus.

The Phillies didn’t do much better when they flipped Lee to the Mariners in December of 2009 for J.C. Romero, Tyson Gillies, and Phillippe Aumont. Romero is a 23-year-old reliever in his third season at Double-A. Gillies is struggling in Double-A after missing most of the 2011 season. Aumont, still considered one of the Phillies’ top prospects, has walked 12 batters in nine innings at Triple-A Lehigh Valley this season.

Lee was traded again, this time from Seattle to Texas. The top players received by the Mariners in that deal were pitcher Blake Beavan and first baseman Justin Smoak. Beavan has started 22 games for Seattle the past two years and has a career 4.35 ERA. Smoak’s star has faded as he has struggled to hit Major League pitching. Smoak, now 25, has a .552 OPS in 35 games for the Mariners in 2012.

The most talked about trade at the time it occurred was the Twins’ swap of two-time American League Cy Young winner Johan Santana to the Mets for four prospects in February of 2008. Minnesota received Carlos Gomez, Phil Humber, Deolis Guerra, and Kevin Mulvey in return for their ace. Guerra failed as a starter and is now pitching well in relief for Triple-A Rochester. After two underwhelming seasons in Minnesota, Carlos Gomez is now in his third season as the Milwaukee Brewers’ fourth outfielder. Mulvey pitched a total of two games for the Twins. Humber, who recently threw a perfect game for the White Sox, bounced around for several years before finding a home on the Southside of Chicago in 2011. Despite the perfect game Humber, now 29, is just 1-2 with a 5.77 ERA for the White Sox this season.

The recent past is riddled with small market teams who dumped their number one starter because they couldn’t afford to sign them upon filing for free agency. None of the aforementioned trades jumpstarted a rebuilding plan; most of them failed to yield a single dependable big leaguer. The Cubs are not a small market club and can afford to sign Garza. Trading Garza may actually prolong Chicago’s rebuilding plan rather than expediting it.