Marching Towards Madness in Indiana

Basketball in the time of pandemic. 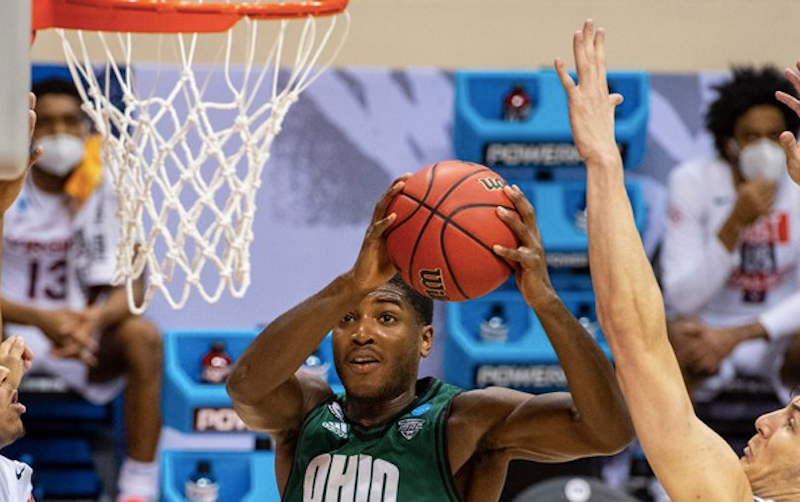 As I watched the University of Virginia vs. Ohio University NCAA basketball tournament game Saturday evening, that sinking feeling began to creep in as the UVA Cavaliers hoisted up brick after brick on wide-open shots for the entire game. The designed offense was working, but players need to be able to "finish" with a basket to actually score. As a fan of the team, I'm familiar with the post-season rollercoaster ride they've found themselves on over the past few years.

Three years ago, the "Hoos" gained the dubious distinction of becoming the first 1-seed to lose in the NCAA Tournament to a 16-seed when the lowly University of Maryland, Baltimore County Retrievers drubbed them 74-54 in the first round. The next year, the Cavs bounced back from that defeat and won the NCAA championship. The 2020 tournament was cancelled, so UVA's the defending champion this year, meaning they got back on their seesaw. The 13-seed—in that bracket—Bobcats (51-seed in the overall tournament) took the game, 62-58, and the downtown Charlottesville mall fell silent once again that evening. UVA coach Tony Bennett is the most gracious of losers, and he gets ample opportunities on basketball's biggest stage to prove it.

As I'd picked UVA in my brackets to go all the way to the championship (I can't rooting against my team just to win a side competition), the loss was doubly disappointing. But there was a silver lining—the discovery of the rags-to-riches story of Ohio University's baby-faced star point guard, Jason Preston, who scored a total of 52 points as a high school senior at Boone High School in Orlando, but is now looking like a second round NBA draft pick.

In high school, Preston was a blogger covering the Detroit Pistons for Piston Powered. He somehow got a scholarship to play on a Division I college team, despite receiving no early offers, by making his own highlight reel and posting it on Twitter. How that happened after averaging two points per game on a prep school "C team" is part of what makes Preston the most intriguing player in the 2021 tournament. I saw a selfless player with an uncanny ability to repeatedly get the ball to open players. But at Ohio, where he led his team in scoring this year, Preston got to show the full range of his abilities. The fact that Coach Jeff Boals recognized an obscure player's potential from that video alone is a credit to his ability to evaluate basketball personnel.

Tempering the pain of UVA's embarrassing loss is the fact I got exposed to not just one, but two Cinderella teams that evening. The emergence of underdogs—who will they be?—is always a major part of the March Madness experience. Staying up past midnight to watch 14-seed Abilene Christian University bounce 3-seed Texas out of the tournament in the first round turned out to be a rewarding decision. Abilene let a lead slip away at the end of the game, and the clock was ticking towards a Longhorns win when all that praying on the Abilene campus appeared to come to fruition. With 1.2 seconds remaining and Texas up by a point, Matt Coleman fouled Abilene's Joe Pleasant, a 58.5 percent free-throw shooter. The junior forward swished his first free throw for a tie, and then rattled in his second for his team's first NCAA Tournament victory. An interesting footnote is that both Abilene Christian coach Joe Golding and Ohio University coach Jeff Boals once played for the teams they now lead.

My brackets are already shot, and my team's back in C-ville laying low, so all I want to see now is more upsets; the Sunday games produced a bonanza. First, 8-seed Loyola of Chicago dismantled 1-seed (no. 3 overall) Illinois 71-58 by slowing the game down and playing at their own tempo. Then, 15-seed Oral Roberts (61-seed overall, out of a total of 68 seeded teams)—another Christian school—powered by the nation's top scorer, guard Max Abmas, took out 7-seed Florida 81-78. Finally, 12-seed Oregon State clipped 4-seed Oklahoma State, 80-70, even though their star player, senior guard Ethan Thompson, spent most of the first half on the bench due to foul trouble. By early Sunday evening, NCAA.com had announced that no perfect brackets (the odds for a perfect bracket through all 63 tournament games: one in 9.2 quintillion) remained of the approximately 20 million individual online brackets played on the NCAA site, ESPN, CBS Sports, Sports Illustrated and Yahoo. This tournament's wide open.

The storyline now is whether or not any of the remaining teams can prevent undefeated (27-0; 1-seed in its bracket and 1-seed overall) Gonzaga, from winning the tournament, which for the first time is being held entirely in one state—Indiana. As a result, geographic location plays no role in any of the matchups—overall seedings determine which teams play each other. The Bulldogs, with two comfortable wins so far, appear to be above falling to an upstart, as does overall 2-seed Baylor, also undefeated this season. Gonzaga, located in Spokane, Washington, and playing in the West Coast Conference, hasn't been tested as hard as Baylor, which has toiled in the brutal Big 12 all season. Some may think that this tips the scales towards Baylor (Waco, Texas), but it means the "Zags" might be fresher. Anyway, there's no guarantee either team will be playing in the final on Monday, April 5 at the Lucas Oil Stadium in Indianapolis. That's why I'll keep watching.