Cutting corners as a way of life. 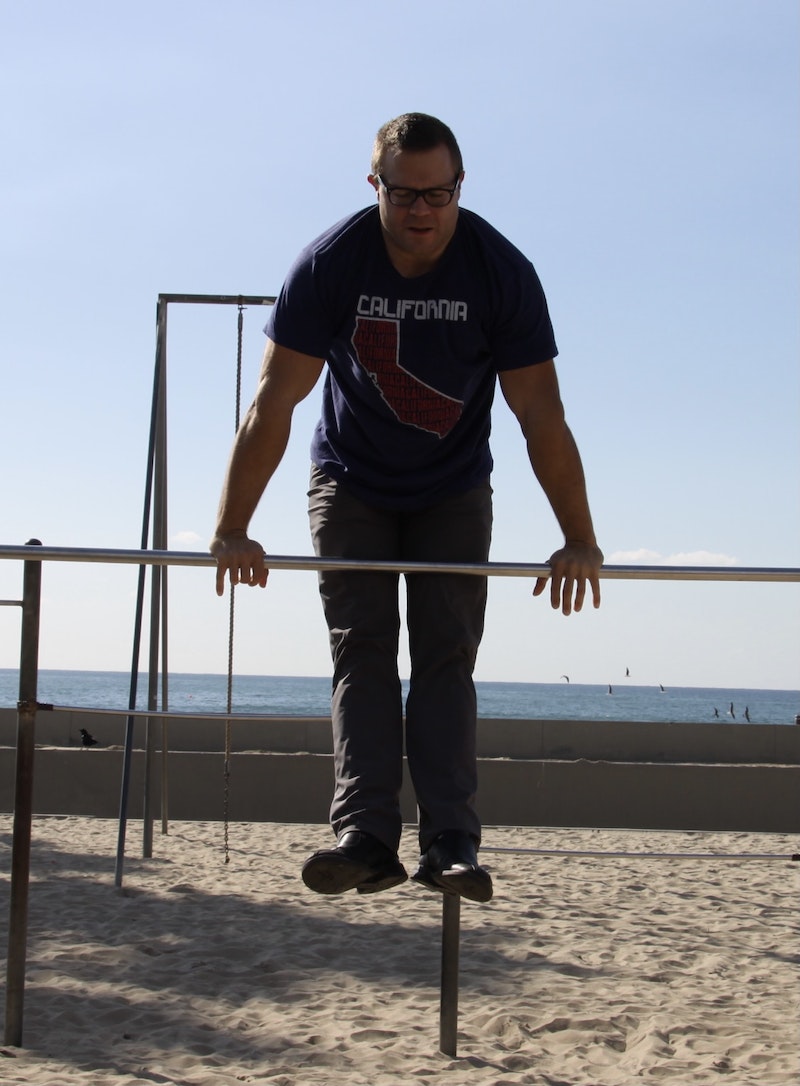 I came face to face with the concept of “kipping” back in 2009, when I began training at the University of Pittsburgh’s CrossFit affiliate. That term, as I understood it prior to my CrossFit encounter, referred to a gymnastics movement that consisted of swinging one’s legs to gain the momentum needed to place one’s body on top of a horizontal bar, a “bar-up.” I’d always been able to do bar-ups, and always kipped when doing them, but didn’t think much about kipping beyond that. Yet in CrossFit, the “kip” served as a cornerstone of their practice—it was necessary in order to perform simple pull-ups, since dozens and sometimes even hundreds of pull-ups were programmed into “WODs,” workouts of the day. Without kipping, few people could chain together so many pull-ups even if using semi-strict, bent-arm chin-up form that recruited the biceps as well as the lats for additional propulsion, much less with completely strict, dead-hang, chest-to-deck form.

This over-reliance on the kip resulted in loads of CrossFitters, particularly novice or intermediate-level athletes—I use “athletes” because CrossFit billed itself as the “sport of fitness”—swinging like pendulums on pull-up bars, barely even getting their chins above the bar with strongest of kips and bloodying their hands as they clutched the bar. This made for some amusing visuals, as did the rest of the dumb, weird stuff, such as deadlifts and Olympic lifts done for time, that CrossFit included amidst otherwise-useful exercises such as air squats, box jumps, lunges, burpees, handstand push-ups, and jump rope double-unders.

The kip mattered to CrossFitters, and many “boxes” taught it as the single fundamental skill a novice trainee had to learn. Even if you, like me, could already complete full-extension, dead-hang, chest-to-deck pull-ups, this was irrelevant; you couldn’t do enough to complete a WOD that called for 100 of them. Every WOD movement was initially kipped in some fashion. Handstand push-ups followed a progression against the wall that, at one point, involved using a bent leg to help one kip back up. Muscle-ups on gymnastics rings and bar-ups on the pull-up bar demanded supersonic kips that took “stress off the muscles” and quickly got your torso in position to complete the motion. There were kipped push-ups, kipped sit-ups, kipped burpees, kipped kettlebell swings, you name it. Kipping came to refer to any incomplete or assisted motion.

Some of the fastest CrossFit athletes with whom I trained, far faster than me at any rate, possessed little besides a mighty kip. At least on paper, CrossFit and its accompanying Games—open to all its putative athletes—promoted adherence to strict form, but clips from the annual Games nevertheless became noteworthy for comical, horrific, and dangerous form of all kinds. Form always degraded as one hurried through WODs haphazardly programmed by a guru, Dave Castro, who starred in the worst deadlift video to ever appear on the Internet (there are many contenders for this no-prize). Hands became bloodied from all the kipping, athletes who spent years devoted solely to kipping couldn’t complete strict versions of the bodyweight exercises when those versions were programmed into the WODs. Kipping practice crept into the barbell lifts, too, as witnessed by innumerable “FAIL” videos of CrossFitters round-backing or “cat-backing” deadlifts, squatting above parallel with shaky or “knocked” knees, and attempting military presses that end up being bad jerks or push presses. No corner was too wide to cut in the pursuit of functional fitness.

Enough about CrossFit. Its founder and former CEO Greg Glassman has had his issues, and its WODs have had their issues, but that’s that. Whereof I need not speak, thereof I will say nothing, to paraphrase the eminent professor Jonas Ruggleteapot. If you like CrossFit, you’ll love it, and if not, not. Do what thou wilt while getting swole in the gym is the extent of my law, kids, and if you end up hurting yourself or your reputation, that’s your fault. Even if you subscribe to my education-oriented podcast, I’m not getting paid to educate you.

Back to kipping: I’m obliged to address the kip because a congresswoman recently posted a video of herself performing kipped pull-ups—essentially pendulum swings on an elevated horizontal bar, as I wrote earlier—in the context of a CrossFit WOD. The social media hot-takers leapt into action, rushing to “drag her ass” for clout, and their behavior gave me pause. How many of these kids, our work-doing peers, could do the work of a single non-kipped pull-up, even the bent-arm, not-fully-extended variant? I knew the answer because it was my grade-school fate to always win these strict chin-up competitions, usually with 15 or 20 reps at a bodyweight in the low 210s, and I understood all too well that most folks stalled out with one, or none. “Physician, heal thyself,” as they say, whoever “they” are.

There are reasons to criticize that congresswoman on other grounds, but the fault in her form was in the WOD, not in her body’s performance thereof. CrossFit has promulgated its formal standards, but they’re honored almost exclusively in the breach. There’s a Platonic CrossFit, a “CrossFit of the spheres” or some such thing, but that box operates in the seventh heaven, if anywhere. CrossFit WODs performed by so-called athletes with little to no supervision ensures that most of these workout warriors will kip their ways to “PRs”—personal records—by the oldest performance-enhancing methods of all: half-assing the physical labor combined with the emotional labor involved in bald-faced lying. Donald Trump, Jr. chose the latter path, lowering his time in an endurance-heavy WOD merely by claiming he did it in much less time than it actually took him. He told a fib, and what is a fib if not the finest kip of all?

Kipping is an ethos, a lifeway, a sign of the times. What are our wondrous circa-2021 labor-saving devices, if not kips? Smart phones, smart refrigerators, smart toilets, smart diapers. Five-minute executive summaries of thumbsucking pop psychology articles that could be read in 15. “Essential” new books reviewed without being read. “Blockbuster” movies reviewed without being seen. Tweets retweeted and even written without being read. Intimacy kipped via an OnlyFans subscription, the ultimate in “working from home.” Why not?

Most of us want to “have done” things; few want “to do” these same things, because “doing” is wearying. Only the most masochistic of workers want to go full-extension, ass-to-grass, paused-at-bottom while engaged in the game of life. People, by and large, want to be wherever they currently aren’t, and to get to wherever that somewhere else is as expeditiously as possible. Whenever they’re stuck in one place, they’re glancing down at their phone screens, trying to kip themselves anywhere else at all. I’ve spent time with such individuals, fascinated by their apathetic wanderlust carried out on such unsteady land legs. A friend described a trip to the movie theater back in those prehistoric pre-COVID times, whereupon he immediately began watching TikTok videos and dozing off periodically, before actually stepping out to his car to eat a hamburger he’d left in there earlier that day, get some better shuteye, and charge his iPhone. He got up in time to reenter the theater and catch the end credits. He couldn’t remember the name of the movie he’d seen, since multiple Marvel Cinematic Universe offerings were playing, but assured me it was “one of those ones... you know, you can peace out for 20 or 30 minutes and not miss a thing.”

Now for “ya boi” here, it’s a different story. Throughout my life, I’ve done things one way, and that’s the hard way, often unnecessarily hard. I want to do things the hard way because I want to know I’ve done them the right way. As Anthony Hopkins tells Alec Baldwin in David Mamet’s script for The Edge, “what one man can do, another can do.” Hopkins says this in the context of killing a bear, but I think about it in the context of every mundane task I undertake. If I can’t prove my powers and complete the job, what’s the point? Everyone has to do what they must, because they can. It’s understandable if they can’t, but what if they won’t? Then they’ve failed themselves, in the process committing a grievous form of self-harm: they wasted their lifetime, the time they’ve been vouchsafed in order to have the time of their life. You hate to see it, kids, but hey, I’m not your dad. Do what thou wilt and all that jazz.