My One Time Working in Fenway Park’s Press Box

I’ll watch the games as a spectator, thanks. 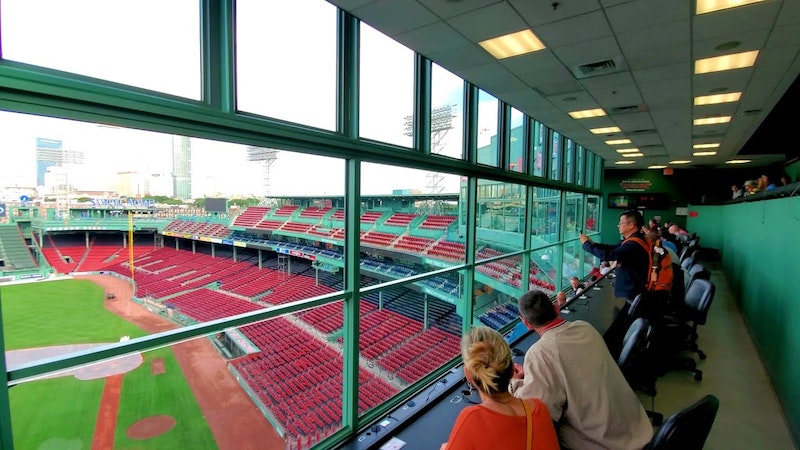 Another Major League Baseball regular season is here, and I look forward to seeing my favorite team, the Boston Red Sox, compete—for better or worse. I plan on watching games from home and when I’m out at restaurants, not from the press box. I haven’t covered a Red Sox game at Fenway Park in four years. I was 20 years old, and it’s an experience I won’t forget.

I was at an April 13, 2017 game when they played the Pittsburgh Pirates under some pretty weird circumstances. The Red Sox hosted the Pirates the previous week, but there was a rainout. The two teams had a mutual day off on a Thursday the following week, so they scheduled a 2:05 p.m. game. Attendance was sparse, and it created a logistical nightmare for the Pirates and media outlets. Pittsburgh had a night game at home on Wednesday, in Boston on Thursday, and in Chicago on Friday. After checking the Pittsburgh schedule, I contacted three outlets that covered the team on the road—and The Pittsburgh Post-Gazette was the one that said they could use the reportage.

My first times covering pro sports with media credentials came in 2014 when I was 17 for the now-defunct Triple-A Pawtucket Red Sox. Additionally, I interviewed a handful of road team players and coaches at Boston Bruins games—the first time in 2015 when I was 18 and a freshman in college. But the Red Sox? That was different. That’s the one Boston sports team I’ve followed since the mid-2000s and watched most of their games since then.

Getting to Fenway Park always sucks, but I was on the high school sports hawk desk at The Boston Globe part-time, so I parked at their now-former Morrissey Boulevard building, walked to the JFK UMass MBTA subway station, and rode that to Kenmore Square. I told the ticket window I was covering the game, walked in the park, picked up my credential, took the elevator up to the press box, and couldn’t believe it was happening.

My assignment was to write a pregame notebook and a game recap for $250. The team got in late, so their clubhouse wasn’t open to the public and they didn’t do on-the-field batting practice, but my press pass said I was allowed on the field. Rather, I spoke with a chaplain who was doing the team prayer for a bit about life. Fortunately, the player I wanted to interview, David Freese, is a man of faith, so I got him for the notebook. Jung-Ho Kang wasn’t with the team because he got his third DUI in South Korea—and the U.S. denied him a work visa—so Freese got the starting third base job and was off to a hot start. Then for part B of the notebook, I talked to Euclides Rojas, the bullpen coach. He was also the bullpen coach for the 2004 Red Sox and this was his first game back at Fenway.

The press box at Fenway Park isn’t remarkable. I’m not the biggest fan of Fenway with its cramped seats at odd angles, obstructed view, and poor parking options. People love it because of the history, but that wears off. There are panes of glass with mullions between them partially obstructing the view in the press box. Additionally, the press box food was about $14 and although a better deal than the concession stands, it was expensive. If the clam chowder in there is the same as it is throughout the rest of Fenway Park, then I suggest getting it elsewhere in the city. Clam chowder tends to be better the closer you are to the ocean and while Boston is a coastal city, Fenway Park isn’t a seafood restaurant.

The one good thing that happened on that level was that I met Dave O’Brien, the play-by-play man from the team who’s from the same town where I grew up. I’d interviewed him a couple of weeks prior over the phone, so he was happy to meet me. The feeling was mutual. Pittsburgh lost the game, so I had to criticize their struggling bullpen but did interview former NL MVP Andrew McCutchen because he homered in the game and it was his first of the season. Nice guy. That’s one of three MLB MVPs I’ve interviewed. The others were Ryan Howard a few weeks later down in Pawtucket and David Ortiz the year before when I skipped school and went down to Fort Myers for a day and a night.

After postgame interviews, I went back up to the press box to finish writing. Then it was time to take the MBTA back to my car to drive down to Emma’s Pub and Pizza for some half-price appetizers. Filling in to cover an MLB team occasionally would be a great position to have, but working as a traveling beat reporter? That’s not a job I want.