Destruction In The Desert: Hagler vs. Hearns 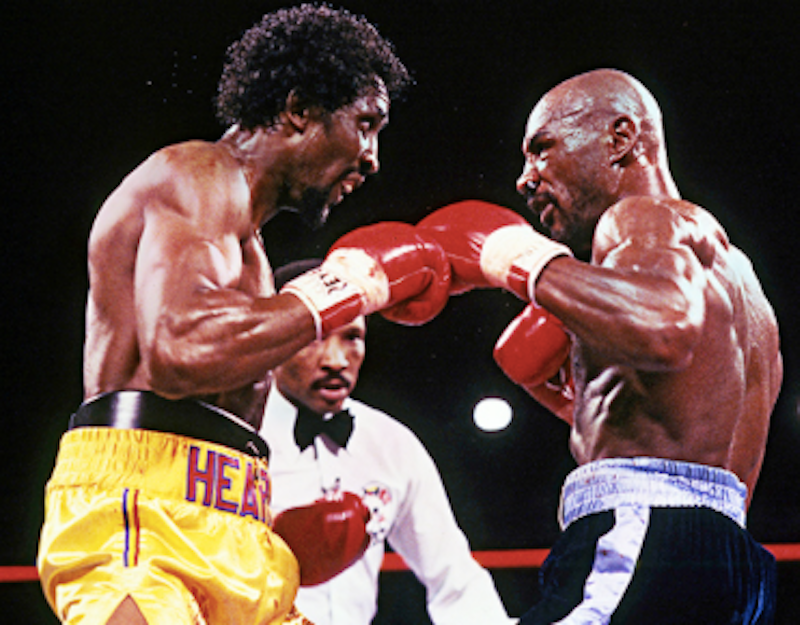 When Marvin Hagler and Thomas Hearns were introduced in the ring prior to their legendary world middleweight championship fight in 1985, "Marvelous" Marvin was the undisputed world champion, and challenger "Hitman" Hearns was the junior middleweight champion who'd moved up a weight classification for the bout. The action-packed three rounds—first called "The Fight," and later on, "The War" were so thrilling that I've lost track of how many times I've watched it on YouTube over the years. Hagler, who died unexpectedly at 66 on Saturday, was known to take his time during a boxing match, but that wasn't his plan on that warm April evening. He wanted to show his feared opponent who was the boss.

The Hitman—formerly known as the "Motor City Cobra"—had a slender build, but his outsized arms and shoulders looked like they belonged on a much heavier boxer. He was coiled power personified, and to square up with him was to risk a knockout with every right-hand punch he threw, which 34 of his 41 previous adversaries had found out. Only Sugar Ray Leonard, four years earlier, had defeated Hearns, and it took him 14 rounds to do it.

Hearns, at 26, was four years younger than the fighter from Brockton, Massachusetts. He also had a four-inch height advantage, and an extra three inches in reach. Hagler could box from both left-handed and right-handed stances, meaning that he was able, with some deft shifting of his feet, to catch his opponents off guard. He wanted to get Hearns on the ropes, preventing him from winding up on his power punches. But even at a distance, Hagler had a knockout capacity, especially if he could tag Hearns at the end of one of his punches, in particular the left hook.

As Johnny Carson's bandleader, Doc Severinsen, played “The Star Spangled Banner” on his trumpet, the outdoor crowd at Caesar's Palace in Las Vegas were about to see a bout they'd anticipated for years. When it was over, the only thing they could have complained about was that the fight was too short, but there was more action in that time than in most entire boxing matches.

With the opening bell, Hagler came out charging. He wasn't interested in boxing; Hearns, who had a fast, flicking left jab and terrifying right hand, was the one who wanted to do that. The champ was spoiling for a street brawl leading to a swift KO, but Hearns stunned Hagler 10 seconds into the fight, and for the rest of the round, the two fighters slugged it out. Faced with an onslaught from a supercharged opponent, Hearns' warrior spirit took over, and he abandoned his plan to rely on his formidable boxing skills. That's when it became The War.

Early on, Hearns opened up a cut on Hagler's forehead, and had his opponent, who'd rarely been staggered in his career, groping for a clinch. The punch to the head also broke the challenger’s hand, but you'd never have known it judging from the flurry of punches he kept throwing, despite what must have been excruciating pain. Hearns hurt Marvelous Marvin, but didn't slow down his forward progress. The champ didn't operate that way, and his ability take a punch was well-established. At the end of round one, Hagler succeeded in pinning his opponent in the corner, but Hearns was able to hang in there with some decent counter-punching. Hagler did stun Hearns, however, just before the bell went off. The Ring magazine declared it the best round in boxing history.

Hagler kept bringing the heat in round two, but Hearns returned fire. Perhaps the hand injury had made him a bit more choosy with his punches. The challenger wanted to keep a safe distance from the predator staking him, and wait for the right opening, but Hagler was still able to get him wobbly at one point. Just as in round one, the champion brutalized Hearns on the ropes as the clock clicked down, but the cut on his head had gotten worse. His own clock was ticking too, and he knew it.

Hagler feared the fight would be stopped because of the cut. Both fighters were holding their own for the first 30 seconds of the third round, but then the referee paused the fight to have the ring doctor look at the cut, which was gushing blood. It was a tense moment, because the fight could’ve been called right there, but the referee decided to allow the fight to continue. Hagler, however, knew that he'd only been granted a temporary respite. He had to knock out one of the greatest boxers in history in a very short time.

Hearns' plan at that point should’ve been to employ extreme defensive tactics in order to survive just until the blood got too much for the ref to take, but it didn't happen. Halfway through the round, Hagler saw his opportunity. Hearns had success using Muhammad Ali's circling while jabbing tactic, but Hagler found a way to attack it. Shifting from southpaw to orthodox stance, something almost no boxer can pull off, he cut Hearns off, allowing him to connect with a solid right. A stunned Hearns ran away from the champ with his back turned, but Hagler caught up and landed another hard right. A few seconds later, Hagler shuffled into his right cross, the forward movement during delivery loading the punch with extra heft. Hearns crumpled to the canvas. He staggered back to his feet by the count of nine, but the referee called the fight.

Tommy Hearns remained a class act after the fight, instructing his team not to mention his broken hand so as not to detract from Hagler's victory. He had to be carried out of the ring, but visited Hagler in his dressing room after he'd recuperated. Knowing that they'd just made history, The Hitman knew that the two of them shared a bond that had to be celebrated, with all the pre-fight bitterness put aside. The challenger had all the skill and power in the world, but Hagler was obsessed and relentless that evening.

Hearns went on to win titles in four more weight classes and fought his final bout at 47. Hagler would fight only two more times. In the last one, Sugar Ray Leonard beat him with a defensive strategy. Hagler thought the judges had cheated him out of a victory, given his constant aggression. In bitterness, he hung up his gloves forever, but he'll never be forgotten.