Mets mistakenly sign guy who would have imploded the Nats. 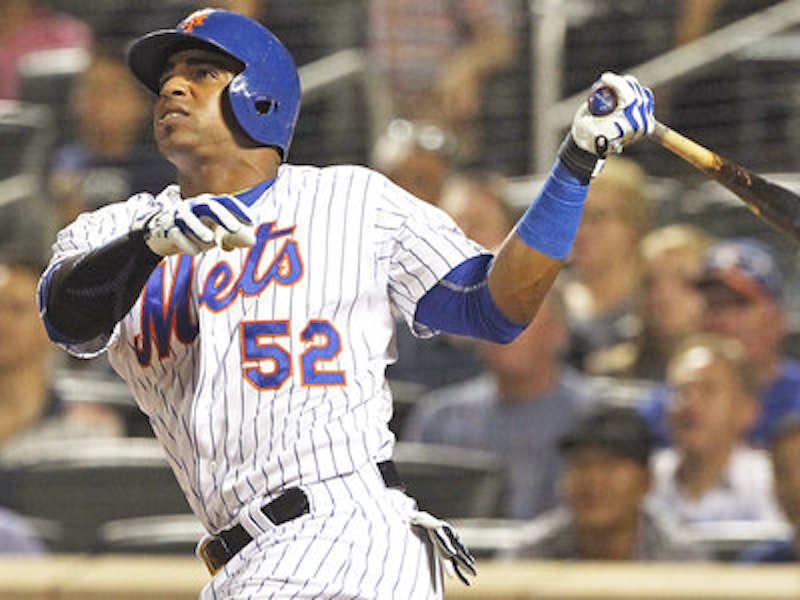 The Yoenis Cespedes drama was a short-lived one-act type of deal that left me as disappointed as Rex Reed screening a remake of Bang the Drum Slowly at a Buffalo Wild Wings in Metuchen.

The Mets should’ve let the petulant slugger sign a Bobby Bonilla-style contract with their fake nemesis the Washington Nationals and their patented D.C. baseball Tower of Babel would again be scattered over the land without any playoff hopes. Sure, the Nats with their “Natitude” seem to win the off-season every winter with some gregarious free agent acquisitions but come Labor Day the shipped has sailed and they are sub-.500 and bickering and pointing fingers. You can set your watch by it and the Mets have it easy in a crappy division. Now with Cespedes on board the pressure is on the Queens lads who’ll have to deal with his Yasiel Puig-style concentration lapses when it comes to off-the-field itineraries. How many team charters will he miss? Will he drink David Wright’s Vitamin Water or ever admit that cut-off men exist? Many questions are affixed to his wacky contract and its looming opt-out clause after one year.

Imagine if Cespedes added Washington as his fifth team in five years? He’d join headcases like Jonathan Papelbon and Jayson Werth and the intense ego of Bryce Harper mixed in with at least four Venezuelans and Oliver Perez. Running this psychiatric ward is none other than geriatric pitcher-killer Dusty Baker who makes former Nationals skipper Davey Johnson seem like Craig Counsell. Throwing yips have moved Zimmerman across the diamond, and last season’s dugout spat between Papeldouche and the reigning NL MVP is a classic D.C. discord making one long set for Minor Threat at the 9:30 Club. The indifferent and somewhat yuppified fan base also throws a monkey wrench into any plans of liking this franchise that used to call Montreal its home city and replaced a Senators team that never could draw a bead on those damn Yankees, even with Ted Williams briefly at the helm. So what if Max Scherzer throws a no-hitter every other game?

Aside from the professional disregard for concentration plaguing Cespedes’ otherwise prolific game, there remains in his permanent file the bizarre resume video called “The Showcase” released in 2011 when he was searching MLB’s version of Craigslist for work. Much of it is softcore workout porn with Star Wars style graphics and infomercial production values. The final scene is of “The Potential” (as he was nicknamed in Cuba) stoking the coals under a pig on a spit. The porker is roasting in someone’s back yard on the island with a few sleepy companions in lawn chairs looking on. The camera lingers way too long, certainly a shot that would send the Mets burgeoning vegan fan sector running for the local vomitorium. There is also a Shameless-style sequence of his shirtless relatives dancing with two women at the same time, again with the camera lingering about three minutes too long on the subjects.

But hey, we’ve made nice with Cuba now so anything goes, right? It has been an odd offseason when winter hibernation is interrupted by press releases announcing the Pirates athletic trainers are now part of what is called the “Performance Team.” The toady MLB commissioner Rob Manfred was bullied into saying the NL was eventually going to adopt the Designated Hitter and ESPN.com rolled out an ill-advised and stupid “MLB 2.0 Reimagining Baseball” series which was wrong on every front and showed how bored their army of columnists must be to come up with this claptrap. And after all the layoffs of “important” journalistic personnel at ESPN over the past few months, it is (ironically) great to see the pedantic Paul Lukas still getting paid to produce a hairsplitting regular column about sports uniforms of all things. Of course he has shortened the perfectly fine word “uniform” to “uni” which is a travesty and along the lines of people who say “veggies” instead of “vegetables.”

It’s a good thing the website of NBC Sports has kicked ESPN well into the background along with the sports Jonestown that is the Godawful Bleacher Report. The internet is so depressing sometimes it makes me long for the old Cuba, when the players were not named Yoenis and did not wear an entire pawn shop around their necks while standing at the plate. We get it. You are wealthy now and you don’t have to roast pigs in the backyard anymore. You can go to Victor’s Café in Midtown, order off the menu and double-park your Lamborghini.