The MLB Commissioner will leave a very checkered legacy. 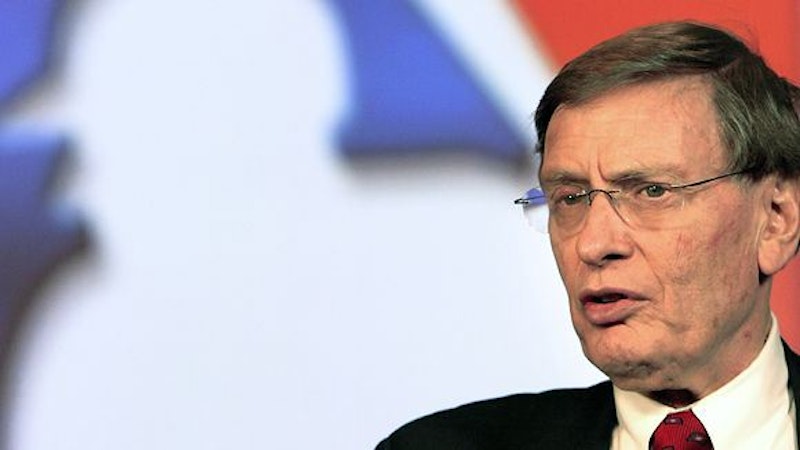 Baseball Commissioner Bud Selig sat down with SI.com’s Tom Verducci last week to discuss his future, PEDs, instant replay, and his legacy. The 79-year-old former Brewers’ owner and used car magnate has held his post since the owners ousted Fay Vincent in 1992. While Selig has presided over MLB during a time of tremendous growth in terms of revenue and attendance he’s also been at the helm during some of the sports’ greatest embarrassments. From the cancelled World Series in 1994, to the Steroid Era smashing offensive records, to the tie in the 2002 All Star Game, to the current unbalanced schedule and Biogenesis quagmire, Selig has vacillated between baseball’s bumbling bureaucrat to the game’s elder statesman. Selig, fresh off the Biogenesis mess and the announcement of a haphazard new instant replay scheme, defended his inactions and actions of the past two decades in his interview with Verducci.

When Verducci pressed Selig on charges that he, and MLB, were slow to respond to the use of steroids in baseball Bud predictably responded:

But what did we do? Within the first year we went to Harvard [for a study], with the union, after the union had fought it. Think about it. Anybody who makes that strange charge [that baseball was slow to respond to steroids]—this sport had no drug testing. None. Zero. And the next thing that happened… we didn't have a labor negotiation until '02. This is a subject of collective bargaining. This is not something the commissioner can unilaterally do. There was no drug testing. There was no program. There was no drug testing and no program in the '80s when we had a very significant cocaine problem.

Selig incriminates himself with his own response. He states that there was no labor negotiation until 2002, which would be true if the steroid issue suddenly popped up in the late-90s. The rumors and innuendo surrounding steroid use began with the Bash Brothers in the late-80s. The strike that caused the cancellation of the 1994 World Series occurred just prior to the late-90s offensive explosion. The fact that the steroid issue went unchecked in the ’94-’95 labor negotiations set about nearly a decade of unchecked rampant abuse. As the Chief Executive of baseball Selig was at least willfully negligent in the process. Oh yeah, he and his fellow owners also made a boatload of cash as a result.

Selig ends that statement by stating, “There was no drug testing and no program in the '80s when we had a very significant cocaine problem.” Shouldn’t the fact that Selig lived through the cocaine scandal of the 80s have given him some indication that the steroid issue needed to be addressed in the early 90s rather than a decade later? Of course it should have, but Bud won’t admit that now.

Verducci then pressed Selig on his repeated suggestions that there was no place in baseball for instant replay, right up until the time that baseball announced a new instant replay system last month. Selig at least admitted he was wrong in the case of instant replay: “But I guess what I would say to you is I do listen. There are times in life sometimes when you have to reconsider something. And that's what I've done.”

Sure, he’s listened, I guess. But what’s he listened to and then approved is a haphazard half-measure  that takes the onus of getting the on field calls correct from the umpires and dumps it in the laps of the managers. The challenge system has been awful for NFL officiating as the game has slowed to a crawl in many instances and the subjectivity of many on field calls has left the integrity of officials open to question. The challenge system has decreased the performance of NFL officials by making them less accountable for on field calls and at the same time made the NFL ripe for an officiating scandal. Now Selig has agreed to bring those same problems to MLB.

The real problem with the new replay system is that it doesn’t guarantee that egregious officiating mistakes will be corrected. The poster boy for bad calls over the past few years has been Jim Joyce, who botched a call in the ninth inning of Armando Galarraga’s would-be perfect game in 2010 and then refused to ask for help from his fellow crewmates. Under MLB’s new system Joyce’s botched call would still stand if Tigers’ manager Jim Leyland had run out of challenges before the ninth inning.

The philosophy that doing something is better than doing nothing has become a staple of MLB during Selig’s rein. Rather than simply put a fifth crewmember in the press box for each game with a device to communicate with the crew chief, MLB has decided to make the use of replay another strategic element for managers to consider during the game. Nothing like christening an imperfect system. MLB has made a habit of it. Having the All Star Game determine home field advantage in the World Series was another Selig brainstorm.

Everybody’s least favorite Bud is set to retire following the 2014 season, and it can’t get here soon enough.